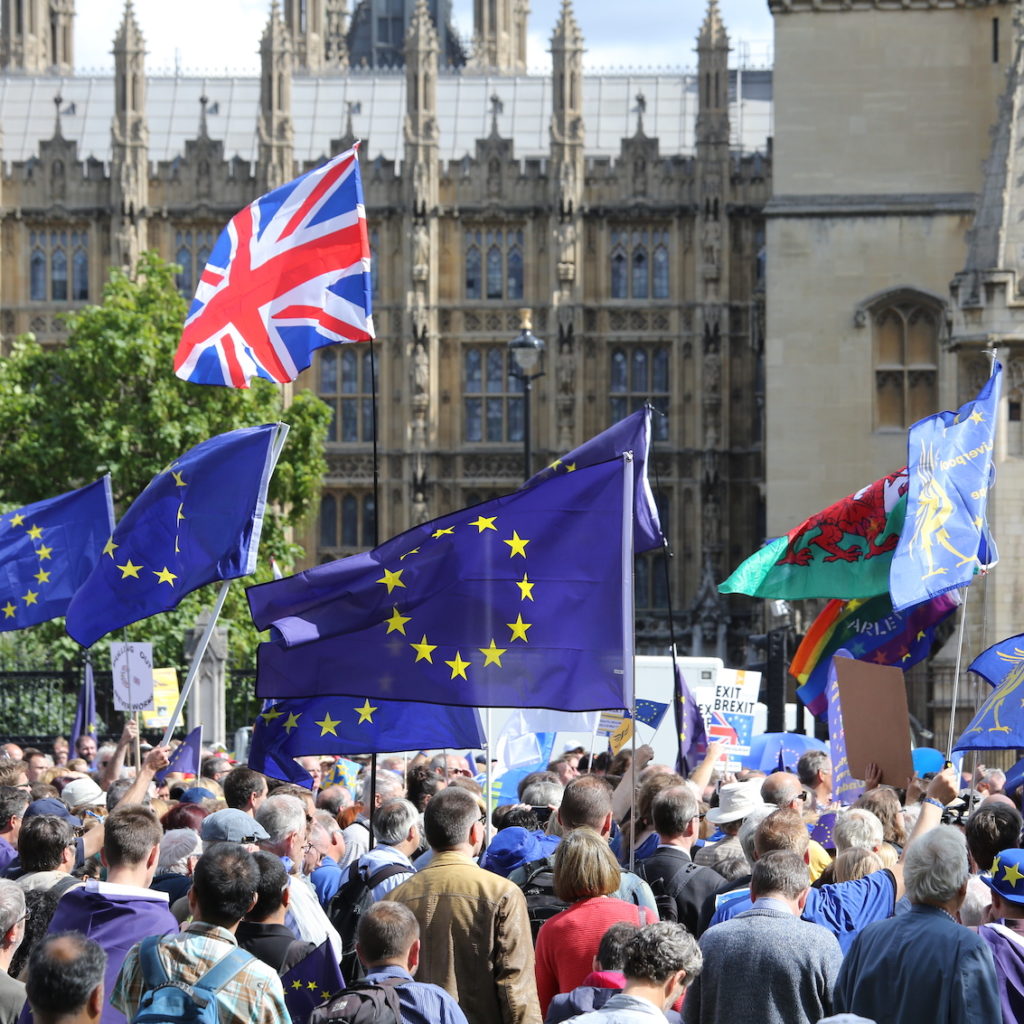 EU and UK flags seen as a crowd gather for an anti-Brexit rally at the Houses of Parliament in Westminster, London in the week when the EU withdrawal bill was introduced to parliament on September 9, 2017.

According to an article by Titus Techera, national conservatives believe that the national conservatism, not the EU, is the legitimate heir of the Cold War victory achieved by Reagan and Pope John Paul II. Techera states that “National conservatives tend to fulfill a negative defensive role: To protect reasonable politics from the attacks of elite institutions, especially EU and NATO, but it’s not obvious whether they want to discredit the EU as such and transform Europe could retain the necessary enthusiasm and urgency playing for what might seem like low stakes. This leaves national conservatives with one possible role in the new politics of national conservatism: National identity is now in crisis in many countries, and the question about who we are requires answering.”

Techera says that the primary fear animating national conservatives in Europe is the slow-building but seemingly inexorable population collapse of the continent, coupled with the already obvious population explosion of Muslims and sub-Saharan Africans. “Even if the US faces no exact parallel to this threat, Trump has shown eloquently that many Americans themselves become indignant faced with immigrant caravans. According to national conservatives, in Europe, the problem could become much more serious,” writes Techera and adds that “After all, France and Germany already face significant difficulty in governing—and even policing—segments of their immigrant population. This situation could grow worse, since it’s not obvious that elites in the EU are willing to defend the rule of law and take citizenship at the various national levels seriously.”

While national conservatives might seem to share populism’s critique of the ruling class, they diverge on the difference between governance and representation, according to an article by Alexis Carre. “Populists ask whether governing elites really resemble those they govern. National conservatives, however, seek to install new elites, fearing the populists’ desired fusion of representation and governance. Political decisions must be not only legitimate, but also correct. So, leaders must have specific virtues to make the right decisions,” writes Carre.

To Carre, rather than transform the structures of political institutions, national conservatism aims to change the character of democratic regime by changing the character of the people in charge of its functioning. “Current elites oppose this project at their own risk,” says Carre and adds “The strong measures that are necessary for the preservation of our regime require a restored faith in the electoral system as a source of legitimacy. National conservatism allows this by transforming the anti-elitism inherent to populism into a posture that makes its integration within the political game much easier.”

According to an article by Iain Murray, today what we see as a European rise in populism is actually resurgent nationalist conservatism. He asserts that “European conservatism has a character different from American conservatism, as Hayek noted, as in America the tradition to be defended is liberty (the same is true, to a different degree, of British conservatism). In continental Europe, the tradition is a darker form of nationalism. Long held back, it is my contention that this ideology has been allowed to flourish by simultaneous crack-ups in what have been the two dominant political ideologies of recent decades – social democracy and transnational liberalism.”

The radical right in Flanders. The nationalism, populism and conservatism of the Vlaams Blok/Belang. De Cleen, B., 22 Aug 2014, European Summer University for Social Movements.

Çarkoğlu, Ali and Kalaycıoğlu, Ersin, The rising tide of conservatism in Turkey, New York: Palgrave-Macmillan, May 2009.

“The New Right in West Germany: The Transformation of Conservatism and the Extreme Right,” Michael W. Minkenberg. in European Journal of Political Research, vol. 22, No. 1 (July 1992), pp. 55-81.