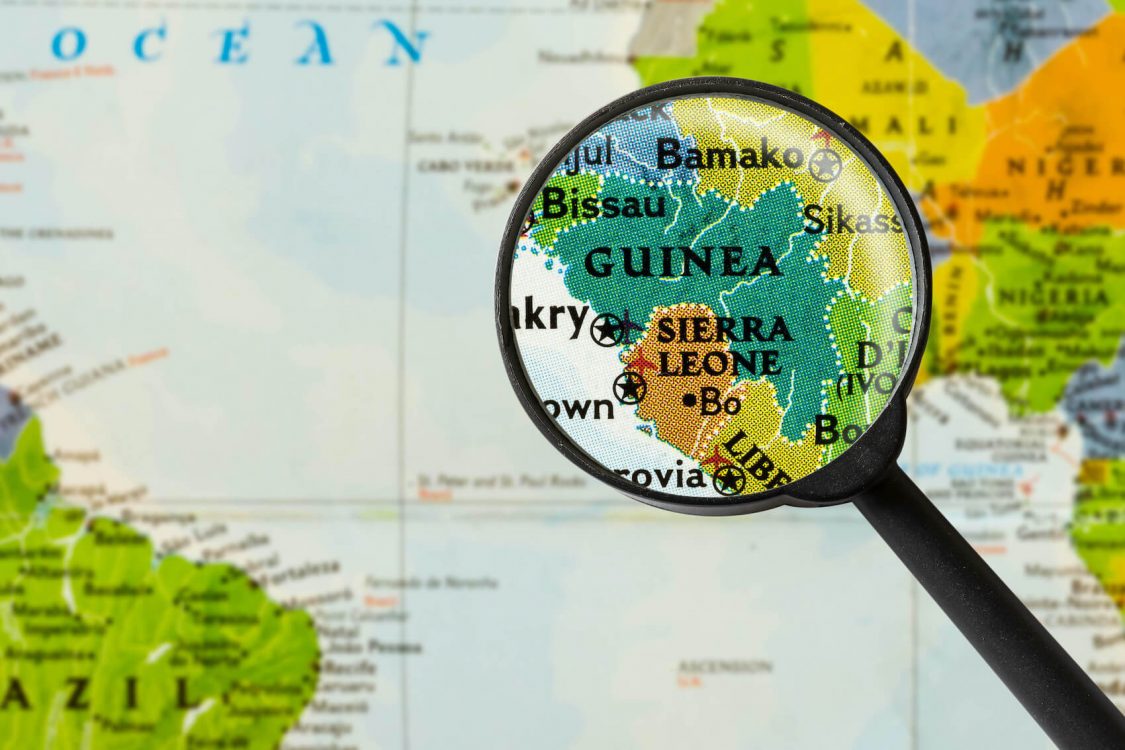 Col. Mamady Doumbouya initiated a coup in late 2021. His message was heavily populist and designed to appeal to the common citizen. Based on a cultivated image of male dominance and shows of physical strength and masculinity, he continues to preach hope and make populist promises to build a better future for all Guineans.

Located in West Africa, Guinea, officially the Republic of Guinea, is a mineral rich country with some of the world’s largest high-grade bauxite and iron ore reserves. It is, however, mostly known for a long history of military coups d’état, authoritarian rule, and civil conflicts fuelled by intense and deep frictions between the country’s social, religious, and political groups. Ever since achieving independence from France in 1958, the country has been ruled either by absolute authoritarian civilian governments or by the military governments and their political designees.

When Guinea became an independent state in 1958, the leader of the strongest labour union in the country, Ahmed Sékou Touré, became the effective president. In less than two years, Touré managed to assert full control over Guinean politics. In 1960, he declared a one-party state with his Democratic Party of Guinea as the sole legal party in the country. In the 1961 general election, he claimed to have secured 100 percent of total votes as the sole presidential candidate. Until his death in 1984, he ruled Guinea as a virtual dictator, declaring absolute victory in four general elections—1961, 1968, 1974, 1982—in the absence of any legal opposition. His regime was characterized by severely harsh measures to control dissidents, as well as political and civil life. For decades, in several major concentration camps, such as Camp Boiro, thousands of people were executed or died from torture or starvation. Throughout the 1960s, executions, torture, mass arrests, and enforced became almost daily occurrences (Pace, 1984). From 1961 to 1980, an estimated 2 million people fled the country to avoid being killed by the regime’s forces (US Committee on Foreign Affairs, 2007).

The Touré regime possessed significant populist features. Toure’s famous motto during the struggle for independence—“Guinea prefers poverty in freedom to riches in slavery”—later became his regime’s tagline (Pace, 1984). Accordingly, he completely rejected French and Western ties, turning Guinea into a Soviet client state. Under the influence of the Soviet Union, he initiated a set of economic reforms to create a Marxist state in which the means of production were publicly owned and controlled by the central authority (US Committee on Foreign Affairs, 2007). Over the years, however, he turned to a more pragmatic foreign policy agenda, which opened the doors to economic aid from both blocs.

The 1984 Guinean coup d’état marked the beginning Lansana Conté long rule as the 2nd president of Guinea (Bah, 2015).Upon assuming office, Conté initiated a set of political and economic reforms, as part of which hundreds of political prisoners were released from prison while thousands in exile were called on to return to Guinea, their safety guaranteed. In an attempt to liberalize the country’s economy, he initiated several major privatization projects, agreed to financial cooperation with the International Monetary Fund (IMF), and significantly reduced social spending. In 1991, the very first multi-party elections were held. Running against seven other presidential candidates, Conté, under the Unity and Progress Party (PUP), was announced to have won the election with some 51 percent of total votes. In 1998, Conté repeated a similar electoral success by securing some 56 percent of total votes. Because most opposition parties boycotted the 2003 elections, Conté was announced to have gathered 95 percent of total votes, which secured him a third term in the office. Amid heated debates due to his declining health, he went on to embark on another seven years in power with a populist inauguration speech in January 2004: “From public officials to private economic operators, we will ensure that corruption is discouraged, and government revenues will be used to give people their needs including schools and hospitals and the essentials of feeding,” Conte pledged (The New Humanitarian, 2004). Perhaps unsurprisingly, however, he died four years into his third term, in December 2008. His death was followed by a series of short-lived military governments over the next two years.

The 2010 Guinean presidential election launched a new era in Guinean politics. Alpha Condé of the Rally of the Guinean People (RGP) assumed the presidency after securing some 52 percent of total votes. Condé and his RDP repeated similar electoral successes in the 2015 and 2020 elections, remaining in power until a successful coup d’état by Col Mamady Doumbouya on September 5, 2021. As the first democratically elected President in the history of his country, Condé was once touted by many as “the Nelson Mandela of West Africa.” This was largely because, before his accession to power, his life had been full of political ups and downs, in which he was imprisoned and even exiled due to his political struggles against the country’s authoritarian establishment. His accession to power in 2010, therefore, meant a new page for vulnerable populations, groups, and communities. In his popular inauguration speech, Condé stated that he would try to be Guinea’s Mandela and unite every son of Guinea during his time in the office: “The restoration of social cohesion and national unity requires a collective look at our painful past” (Samb, 2010).

Condé also pledged to fight against corruption and the theft of public funds, as well as to reform the country’s unruly military (Samb, 2010). His government, however, opted to revert back to authoritarian tactics, such as cracking down on the media, imprisoning opposition voices, and trying to change the constitution in an attempt to solidify his grip on power for many years to come (The New Humanitarian, 2020). A credible UN human rights agent defined Condé’s increasing authoritarianism: “Alpha Conde is one of the politicians who worked over 40 years for democracy in Guinea. Once in power, he totally destroyed it. He put people in prison. He killed and he completely refused any political dialogue with the opposition” (Ross, 2021).

In September 2021, the Condé government was overthrown in a coup led by Col. Mamady Doumbouya. Col. Doumbouya has initiated a coup laden with populist messages designed to appeal to the common citizen. In his speech after seizing power, he defined the Condé regime as a corrupt and personalized regime and promised not to entrust politics to one man, but instead to the people (BBC News, 2021). Doumbouya also quoted the late Jerry Rawlings, a military and political figure who twice (1979, 1981) overthrew the government and seized power in Ghana: “If the people are crushed by their elites, it is up to the army to give the people their freedom” (BBC News, 2021).

Based on a cultivated image of male dominance and shows of physical strength and masculinity, Doumbouya, as the interim president, continues to preach hope and make populist promises to build a better future for all Guineans. In late November 2021, he said in a live TV interview that he led the coup as a “patriot,” and intends to “return power to the Guinean people” (Foka, 2021). That being said, regardless of the governing entity, whether civil or military, the country’s weak institutions leave Guinea wide open to rampant corruption as well as malpractice even at the highest levels of the government. In addition to the poor record of political rights, the country also scores relatively poorly in many categories such as personal freedom, same-sex relationships, and religious liberties. In the UN’s Human Development Index, Guinea ranks 178 out of 189. Similarly, according to Transparency International’s corruption perceptions index, Guinea is considered among the world’s most corrupt countries. Corruption is indeed a daily practice from the highest levels of government to the lowest.

— (2007). “Prospects for Peace in Guinea.” Hearing before the Subcommittee on Africa and Global Health of the Committee on Foreign Affairs House of Representatives. March 22, 2007.