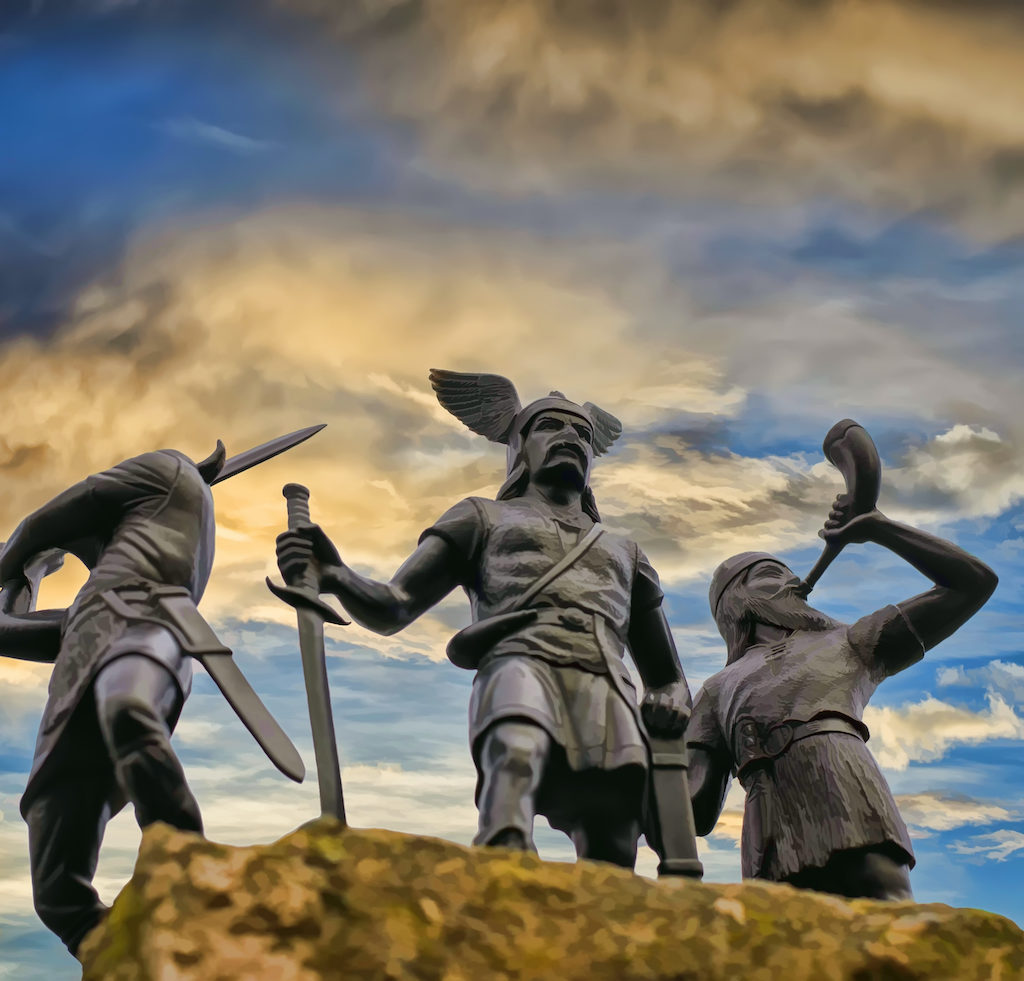 Old Norse God Odin is illustrated on a rock, flanked by two Vikings, one of them raised a sword and the other is trumpeting with horn.

Odinism or Asatru is a religious sect that attempts to revive ancient Norse religious beliefs and practices of pre-Christian Europe. Asatru is not, in itself, a racist religion, though some white supremacists consider themselves Asatruists. Other white supremacists have adopted a more explicitly racial form of Asatru that is most frequently termed Odinism (sometimes Wotanism). It appeals to white supremacists because it is a “warrior religion” in contrast to the ostensibly pacifist Christianity, and because they consider it a “tribal” religion for people of European descent, as opposed to the more universal Christianity, which was also descended from Judaism. Odinists and racist Asatruers will often describe themselves as racialist, tribal or folkish.

Odinism is an ancient religion that honors Odin, Thor, Frigg, Freyr, Freyja, Heimdallr, and other deities from the Norse pantheon. Some adherents view “Odinism” as synonymous with Ásatrú (which means “true to the gods”), but others do not. In addition, some see it as synonymous with Wotanism or Wodenism, but others disagree. In Scandinavia, the religion may be called Forn Sed. A formal union of some groups in Odinism and Asatru was attempted in 1997, but it was dissolved in 2002. In recent years, Norse paganism has been referred to as Heathenry, but many avoid that term.

Heathenry (also termed Heathenism), a Germanic Neopaganism, is a modern Pagan religion. Scholars of religious studies classify it as a new religious movement. Developed in Europe during the early 20th century, its practitioners model it on the pre-Christian belief systems adhered to by the Germanic peoples of the Iron Age and Early Middle Ages. In an attempt to reconstruct these past belief systems, Heathenry uses surviving historical, archaeological, and folkloric evidence as a basis, although approaches to this material vary considerably.

According to an article by Sigal Samuel, as white supremacists marched through Charlottesville in 2017, the high priest of a pagan religion looked on with horror from Reykjavik, Iceland. It wasn’t just their racist message that bothered him. It was that their banners bore the symbols of his religion: Asatru. The faith also has a global footprint. It’s taken on various forms as it’s spread to about 100 countries, with an estimated following in the tens of thousands. Yet there’s a certain fragility at its core.

As the modern iteration of pre-Christian pagan worship, Asatru is a very young religion. And it’s less a single codified religion than a loose cluster of religions: It has no central authority or agreed-upon dogma. Although many followers cherish this ideological openness, it may leave the religion vulnerable to misappropriation. Unfortunately for heathens, there are racists who have also adopted the Asatru faith. This, in turn, can create the impression that the racism issue represents the faith’s central feature.

Pagan culture is not only revitalized and politicized by right-wing populists in northern Europe. According to an article by Andras Bozoki and Zoltán Ádám, it is also usable in Central and Eastern Europe. For instance, when Orbán talks about the reunification of the Hungarian nation, he intends to rebalance power relations between the two camps. He aims to ‘Christianize’ the pagan traditions — or rather, to paganize Christianity to accommodate it to the needs of the Hungarian nationalist right — when he brings together seemingly incompatible religious symbols. To Bozoki and Ádám, in his vocabulary, the Holy Crown of Saint Stephen, the first Hungarian king, who introduced Christianity in Hungary, can easily go together with the Turul bird, a symbol of pre-Christian, ancient Hungarians.

Jobbik is also seen by many of them as representing an essentially pagan, anti-Christian cultural tradition. Bozoki and Ádám write that this might not be accidental. In fact, despite Jobbik’s self-definition as Christian party, Jobbik voters are the least religious in Hungary. “In contrast to other right-wing populist parties of the region, for instance Law and Justice (PiS) in Poland, it does not appear to be the protagonist of religious values. In contrast, it sometimes seems to nurture pagan affiliations, cultivating a longstanding relation of far-right or Nazi political culture to pre-Christian paganism,” claim the authors.