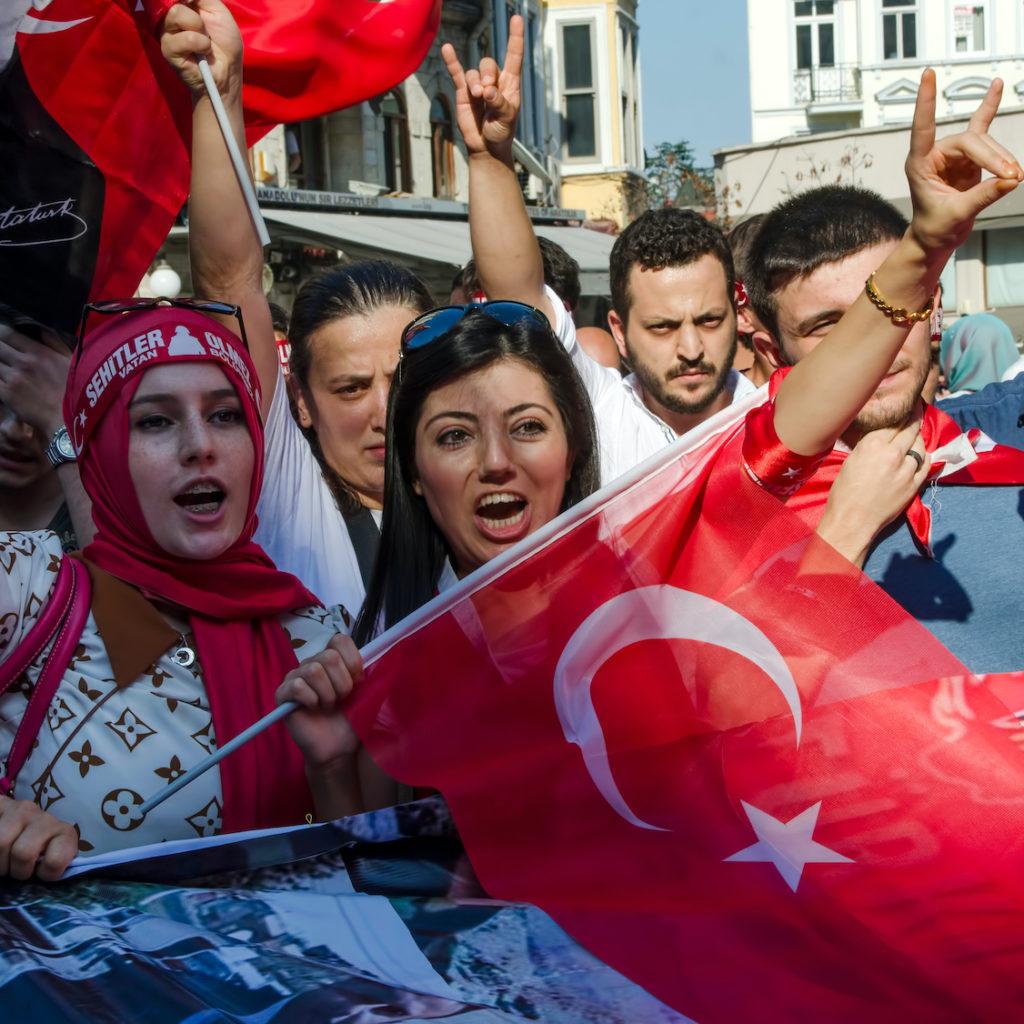 The representation of the unorganized and dispersed Turkist-Turanist movement by a political party took place upon the establishment of the Nationalist Movement Party (MHP) in Turkey.

Turanism is a nationalist cultural and political movement born in the 19th century to counter the effects of pan-nationalist ideologies pan-Germanism and pan-Slavism. It proclaimed the need for close cooperation between or an alliance with culturally, linguistically or ethnically related peoples of Inner and Central Asian origin like the Finns, Japanese, Koreans, Sami, Samoyeds, Hungarians, Turks, Mongols, Manchus and other smaller ethnic groups as a means of securing and furthering shared interests and countering the threats posed by the policies of the great powers of Europe. The idea of a “Turanian brotherhood and collaboration” was borrowed from the pan-Slavic concept of “Slavic brotherhood and collaboration”.

This political ideology originated in the work of the Finnish nationalist and linguist Matthias Alexander Castrén, who championed the ideology of pan-Turanism — the belief in the racial unity and the future greatness of the Ural-Altaic peoples. He concluded that the Finns originated in Central Asia (more specifically in the Altai Mountains) and far from being a small isolated people, they were part of a larger polity that included such peoples as the Magyars, Turks, Mongols and the like. It implies not only the unity of all Turkic peoples (as in pan-Turkism), but also the alliance of a wider Turanian or Ural-Altaic family believed to include all peoples speaking “Turanian languages”.

Although Turanism is a political movement for the union of all Uralo-Altaic peoples, there are different opinions about inclusiveness. In the opinion of the famous Turanist Ziya Gökalp, Turanism is for Turkic peoples only as the other Turanian peoples (Finns, Hungarians, Mongolians and so on) are too different culturally, thus he narrowed Turanism into pan-Turkism.

According to an article by Şermin Korkusuz, an important characteristic of the Turkist-Turanist movement of the 1930s and especially the 1940s was its opposition to the policies of the Cumhuriyet Halk Partisi (Republican People’s Party, CHP) especially in the fields of culture and education. In this regard, the Turkist-Turanist movement developed a reaction to the Westernization policy. It was functioning as an anti-modernization platform. The CHP and the elitist rulers were blamed for imitating the West without comprehending the real foundations of civilization and also for becoming degenerate.

The development of the Turkist-Turanist understanding was to leave both an intellectual legacy and a political/organizational cadre for the ultra-right populist Nationalist Movement Party (MHP). However, in spite of the intellectual and political accumulation, the Turkists were not able to establish a unified organization up to the end of the1960s. The representation of the unorganized and dispersed Turkist-Turanist movement by a political party took place upon the establishment of the MHP.

It is noteworthy to point out that modern Hungarian Turanism, according to an article by Michał Kowalczyk, particularly as it is represented by right-wing populist Jobbik, displays strong anti-Western attitudes. Jobbik is very critical of the international policy of the EU and the US and considers Hungary to be a victim of the West. What is more, Jobbik strongly criticizes globalism, liberalism and anti-traditionalism, which it considers to be features of modern Western societies. Because of this, Jobbik’s ‘Eastern Turn’ appears to be a turn away from the West.

Kowalczyk argues that Hungarian Turanism should be considered a Central European phenomenon. It was an ideology important in Hungary during the first half of the 20th century and based on old traditions and the belief that Hungarians are successors to the Huns. “Therefore, in Turanian ideology Hungarians are recognized as being related to Altaic peoples, which include Turks, Azeris, Tatars, Kazakhs, Mongols, and even Tibetans and the Japanese. Today, this historical ideology is undergoing a revival in Hungary. Turanism is a very important part of the ideology promoted by Jobbik Magyarországért Mozgalom (Movement for a Better Hungary), one of Hungary’s major political parties,” he writes.

“When discussing Hungarian Turanism, especially as represented by Jobbik, we have to also remain conscious of its anti-Western attitude. Jobbik is very critical of the international policy of the EU or the US. Hungary is considered a victim of Western policy due to the Treaty of Trianon,” reminds Kowalczyk and adds, “Considering the crisis now experienced by the West, we can infer that Turanism may become an ideology more popular in Hungary. On the other hand, the migrant crisis in Europe may prove an obstacle for Hungarian Turanists in their attempts to foster better relationships with some Muslim nations considered to be Turanian.”

Moreover, according to an article by András Kovács, in conjunction with a radically nationalistic and anti-globalist ideology, populist Jobbik’s discourse strives to reposition the country in the East-West scheme. While the dominant discourse of the transition is organized around such subjects as ‘returning to Europe’ and ‘becoming part of the West’, Jobbik regularly uses radical anti-American, pro-Russian, Turanist rhetoric.

“If we … profess that we are the descendants of Atilla, we would suddenly find hundreds of millions ready to form a common basis for alliance … if we take a look at the countries from Bulgaria to Turkey and all the way across to Eastern Asia, we realize that we, Hungarians, could have a lot of common political objectives with these countries. We come to realize that an alliance based and developed on the principles of Turanism instead of the Euro-Atlantic alliance would be more effective in serving the needs and interests of our nation … We can safely say that a true Muslim believer … is closer to God the Almighty, than the non-practising Christians inhabiting Europe today. If Hungary wants to regain its position as a strong player on the stage of international politics it should not head in the direction shown by Fidesz and MSZP … but instead membership in a Turanic alliance or, if needed, its leading role and initiative in forming such an alliance.”