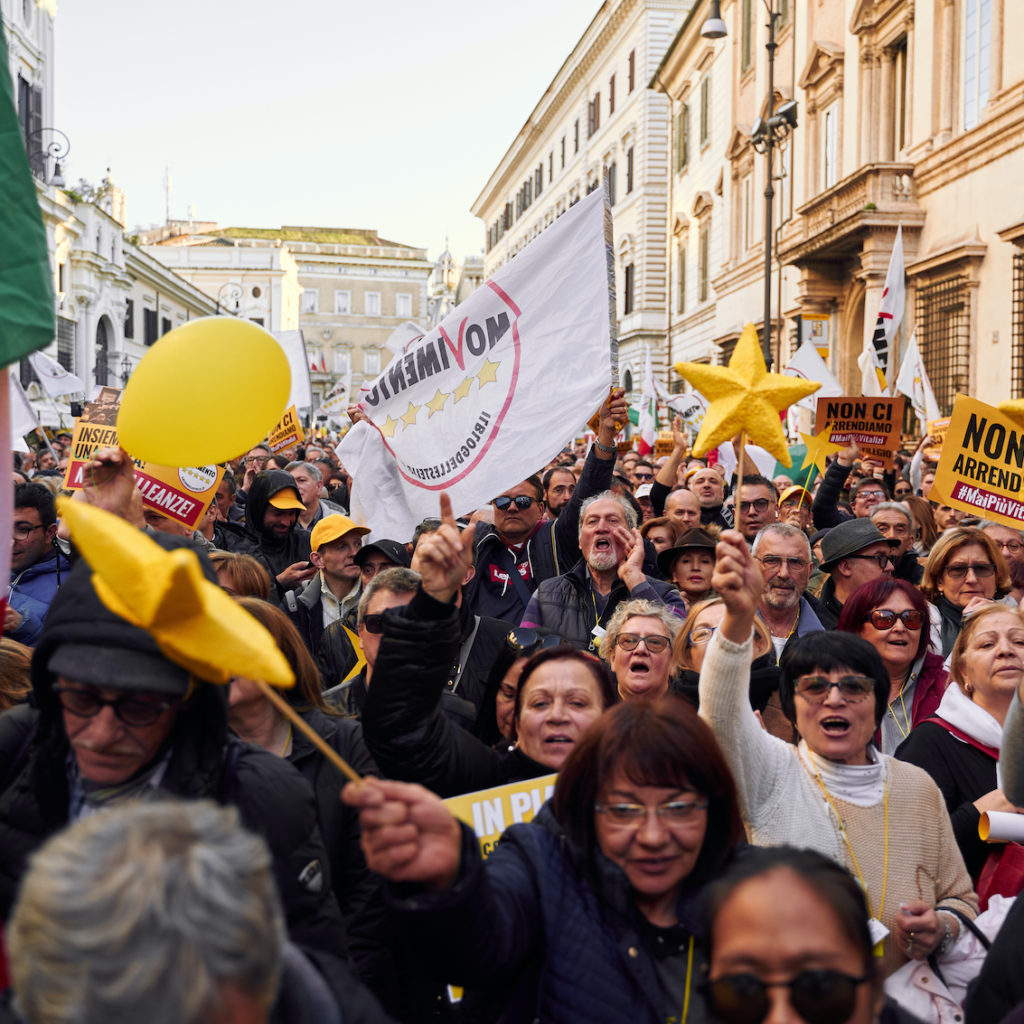 People were cheering and protesting at 5 Stars Movement rally in Rome, Italy on February 15, 2020.

In many new and well-established democracies, the thesis of ‘crisis of parties’ has been raised and vigorously debated over the last two decades, wrote Sing and added that “Proponents of this thesis argue that there is a sweeping lack of confidence among the public towards political parties. Evidence concerning the crisis of parties partly rests on the presence of ‘anti-partyism’, i.e., overt generalized mass-level disaffection or rejection of political.”

Anti-partyism is significant in that it can be a negative force threatening democratic institutions or a major positive force triggering political reform as it mobilizes diffuse disaffection, said Sing and he stated that “Despite the importance of anti-partyism and the sense of its presence, one surprising observation has been that empirical investigation of the origins of anti-partyism at the mass attitudinal level remains sketchy. The lacuna in our knowledge of it around the world persists, in spite of increasing research of it on advanced industrial democracies in Europe, Oceania and North America since 1996. In new democracies or re- democratized polities, studies of anti-partyism are even scarcer. Even rarer has been research on anti-partyism in semi-democracies.”

When different parties were perceived of having failed to represent the interests of the public due to their lack of distinct policies or failure to take up certain popular issues, anti-party sentiments were strengthened, according to Sing. He stated that “In Indonesia, public aversion to powerful, corrupt and unaccountable parties, especially before the democratic breakthrough era, has bred anti-partyism in its recently established democracy. By contrast, the failure of parties in Hong Kong to be representative may originate from their political powerlessness as the ex-ecutive-dominant executive branch has taken up the major functions that parties are presumed to perform. In short, the perceived failures of parties to represent the public interest stemming from a low level of democratization or a skewed electoral system biased against fair representation can contribute to anti-partyism. Similarly, any perceived failure of the political system in general to represent the public can also foster anti-partyism.”

According to a book by Andrea De Petris and Thomas Poguntke, populist, extremist or anti-system parties are not new in the European political scene. At various times in contemporary history, Europe has experienced the rise and development of political movements that have made extremism the particular characteristic of both their political message and their modus operandi. A rather unusual phenomenon is instead related to the so-called ‘anti-party parties’, which have become more prominent in several European countries, especially in Italy and Germany in recent years.

Two types of anti-party sentiments are distinguished: extremist and populist. The first type holds a rejection of parties. They serve, on the one hand, to help them to profit from the existing anti-party sentiments at the mass level and, on the other hand, to help them present themselves in a positive manner, by self-defining the party as the opposite of the other parties. It is thus that the paradox of the anti-party parties can exist.

De Petris and Poguntke stated that ‘anti-party parties’ are a new phenomenon, in fact, consisting in the creation of organizations aiming to compete in the electoral and political contest, which refuse from the start to be considered as equivalent to traditional political parties. “The anti-party parties do everything to emphasize their substantial difference with the traditional parties, adopting a different internal organizational structure, issuing various statutory documents, using different communication strategies, enacting different internal decision- making procedures, and so on,” they underlined.

The authors also said that “Anti-party parties — not to be confused with the larger group of ‘anti-system parties’ – do not necessarily aim at subverting the political and institutional order, but rather at presenting themselves as political organizations different from all other political competitors. In this sense, their rejection of the ‘party’ label is the prerequisite to justify their own existence. All policy strategies pursued by anti-party parties find their justification in their imperative need to systematically affirm and confirm their inherent diversity.”

According to Caroline Kanter, Director of the Konrad-Adenauer-Stiftung in Italy, the new ‘anti-party parties’ managed to make use of the social protests and changed the political landscape in Germany and Italy. “In Italy, the national elections in February 2013 marked a turning point in Italian politics: The Five-Star Movement entered the Parliament for the first time and emerged as one of the most prominent political forces in Italy. With more than 25 percent of the votes it is the largest opposition party. It also gained good electoral results in the elections of the European Parliament in May 2014,” she wrote.

Ina Bieber, Sigrid Roßteutscher and Philipp Scherer stated in a collective article that an anti-party party can literally be defined as a party which campaigns against established parties and anti-party sentiments are a ‘powerful tool for populist politicians who proclaim that they are outside of, and therefore untainted by, the existing parties.’ According to the article, anti-party partyism is an emerging scheme that, through different experiences and electoral weight, can be observed also in other European countries, where anti-establishment, populist, anti-party parties are growing and questioning consolidated patterns: between liberals and conservatives, between left and right. “Where the anti-political dimension is the foundation of this experience. Italy has once again become a laboratory in which trans- formation of politics is experienced with high intensity,” they stated.

On the other hand, according to an article by Filippo Tronconi, the Movimento 5 Stelle presents several features typical of anti-party populist movements in an almost paradigmatic way. “Beginning with the name, it shares with the Lega Nord and Forza Italia the fact that it rejects the label of party, and all the organizational structures traditionally associated with it. It claims instead to be a non-association, with headquarters ‘located’ in the blog run by its founder and leader Beppe Grillo,” he argued.