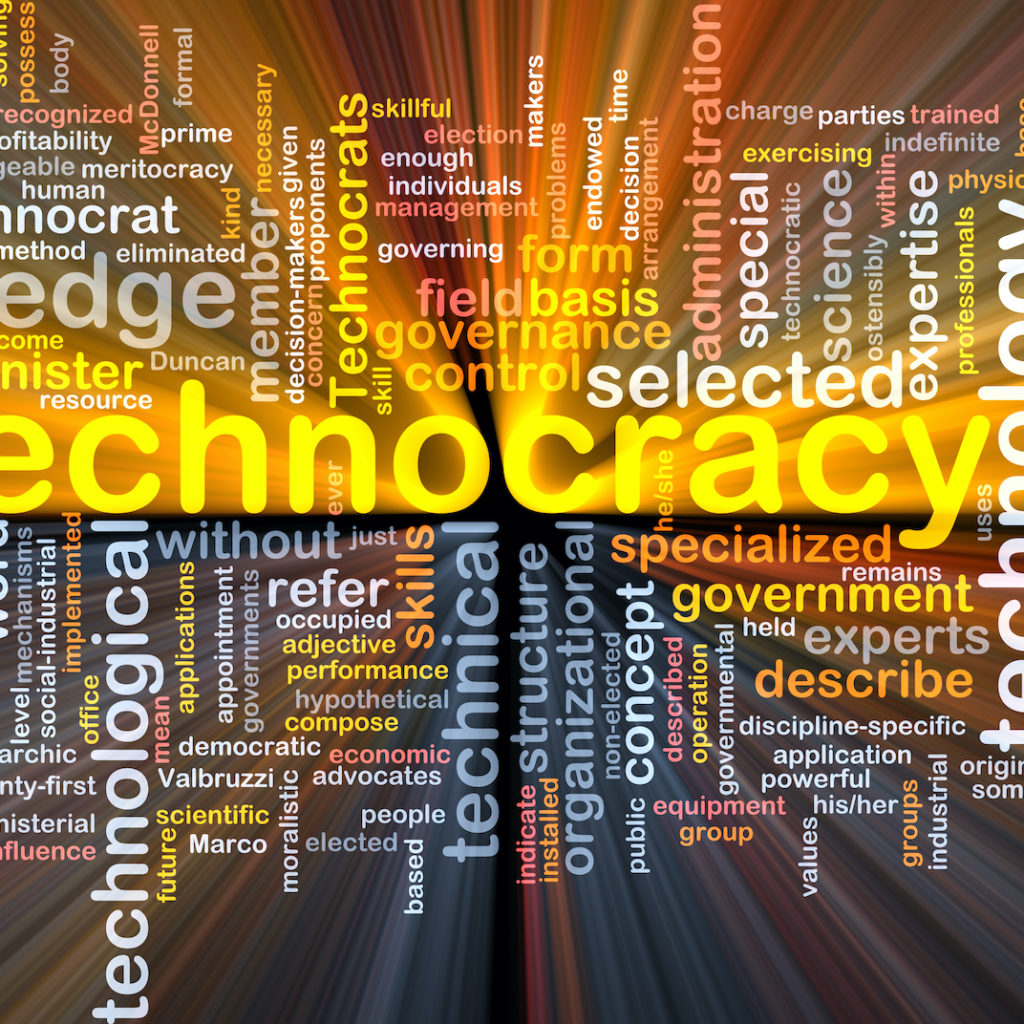 Technocracy is government by experts, according to an article by Marshawn Brewer. The term is Greek in origin, fusing tekhne (describing art or skill) and kratos, meaning power or rule. But the literal meaning of this word is not its salient contemporary sense.

Brewer says social problems, to the technocrat, are thought to come more from incompetence, waste, or negligence than from ideology or malice. As Zbigniew Brzeziński eloquently put it in his book, “social problems are seen less as the consequence of deliberate evil and more as the unintended byproducts of both complexity and ignorance; solutions are not sought in emotional simplifications but in the use of man’s accumulated social and scientific knowledge.”

Technocracy, being more of a method of governing than a value system or worldview, says Brewer, is often used by a dominant ideology to make its ideological agenda more efficient. So, in China, which has until recently been governed as a technocracy made up almost exclusively of engineers, the technocrats support communism, but in America it is often used to make neoliberal policy more effective.

According to an article by Christopher J. Bickerton and Carlo Invernizzi Accetti, in his seminal conceptual history of the term, Jean Meynaud concluded that ‘when he becomes political, the expert becomes a technocrat’. More recently, Frank Fischer explored the normative and epistemological assumptions underpinning the ‘technocratic form of consciousness’, which he argued assumes that ‘knowledge … supplies the only solid basis for solving economic and social problems.’ “A ‘technocratic’ view of the world thus lacks any notion of contestability. This implies that there are ‘right’ and ‘wrong’ solutions to specific policy problems, regardless of partisan attachments and the balance of forces between them. In this way, technocracy effectively reduces politics to an ‘epistemic’ endeavor, in which disagreement can only be the result of an ‘error’ on somebody’s part, or at most the self-serving pursuit of a ‘private interest’ at the expense of the ‘common good’. By implication, we should judge procedures according to whether they are likely to generate the ‘right answers’ to the collective problems societies face,” write Bickerton and Accetti.

“Thus defined, technocracy may initially appear as the opposite of ‘populism,’” the authors add that “However, on closer inspection we observe a number of affinities between them. As Cas Mudde remarked, ‘populism is not necessarily opposed to technocratic measures, particularly if they can help to do away with established politicians.’ ‘In the populists’ view’, he added, ‘the people should be consulted about the broad parameters of policy, while experts should produce mechanisms to bring this policy about.’”

Bustikova and Guasti wrote that technocratic populism uses the appeal of technical expertise to connect directly with the people, promising to run the state as a firm, while at the same time delegitimizing political opponents and demobilizing the electorate by instilling civic apathy. “Technocratic populism is an anti-elite ideology that exploits competence to create the appearance of authenticity and proximity to ordinary people. It is less exclusionary than nativist or economic forms of populisms and its broad appeal is therefore arguably more threatening to representative democracy,” they said.

According to Bustikova and Guasti, in order to understand the appeal of technocratic populism, as well as why it arises at critical junctures when dominant ideologies are in turmoil, one must not ignore its historical roots, which shows that it transcends both regime changes and the traditional left-right divide. “Technocratic populism is a sophisticated threat to liberal democracy because it commodifies citizens, nurtures civic apathy, and creates an opportunity for politicians to concentrate power. However, unless technocratic populists insulate themselves from accountability by manipulating the electoral system, it can collapse if the myth of expert competence is exposed,” they urged.

Vlastimil Havlík also says in his article that the rise of centrist technocratic populism (perhaps less radical at first glance) ends the era of the Czech Republic’s exceptionalism in Central Europe in terms of its resistance to populist illiberal challenges. “Populism combined with technocracy (and not necessarily with more radical ideologies such as nativism) presents a vision of a regime alternative to the dominant liberal democratic paradigm. This alternative is based on a denial of political pluralism, anti-partyism, resistance to constitutionalism, and the embrace of majoritarianism,” explains Havlík.

Meanwhile, to Bustikova and Guasti, when the legitimacy of the liberal democratic project imploded due to corruption scandals, Andrej Babiš filled the vacuum in Czech Republic with technocratic populism. His electoral promise was to “make everything better for the ordinary people” by adopting an “expert and business-like” governance style — running “the state as a firm.” However, the authors warned that the appeal of the technocratic populism of ordinary people is not its promise to return power to “the people.”

“Instead, it offers a technocratic vision of politics that relieves ‘the people’ of the responsibility to lead active civic lives and to hold politicians accountable. Populist technocrats, or businessmen, ask voters to renounce politics and political parties as a growing challenge to more pluralistic forms of representative democracy, there is an increasing need for historical and comparative perspectives to reveal why technocratic populism is alluring,” they wrote.

Technocratic populism is a ‘thin’ ideology that rejects the traditional political parties on the left and on the right and promises a-political expert solutions that will benefit the ‘ordinary people,’ according to Bustikova and Guasti. They said “it emerges, we suggest, at critical junctures as an alternative to the ideology of liberal democratic pluralism. Technocratic populism strategically uses the appeal of technocratic competence and weaponizes numbers to deliver a populist message. It combines the ideology of expertise with a populist political appeal to ordinary people.”

From a Technocratic Solution to a Fragile Grand Coalition: The Impact of the Economic Crisis on Parliamentary Government in Italy — F Marangoni, L Verzichelli, The Journal of Legislative Studies, 2015, 21 (1), 35-53.

Zulianello, M. (2013). When Political Parties Decide Not to Govern: Party Strategies and the Winners and Losers of the Monti Technocratic Government. Contemporary Italian Politics, 5(3), pp. 244-261.

“The Production of Fear. European Democracies in the age of Populisms and Technocracies”, Valerio Alfonso Bruno, Social Europe, June 2018, online at: www.socialeurope.eu/the-production-of-fear-european-democracies-in-the-age-of-populisms-and-technocracies