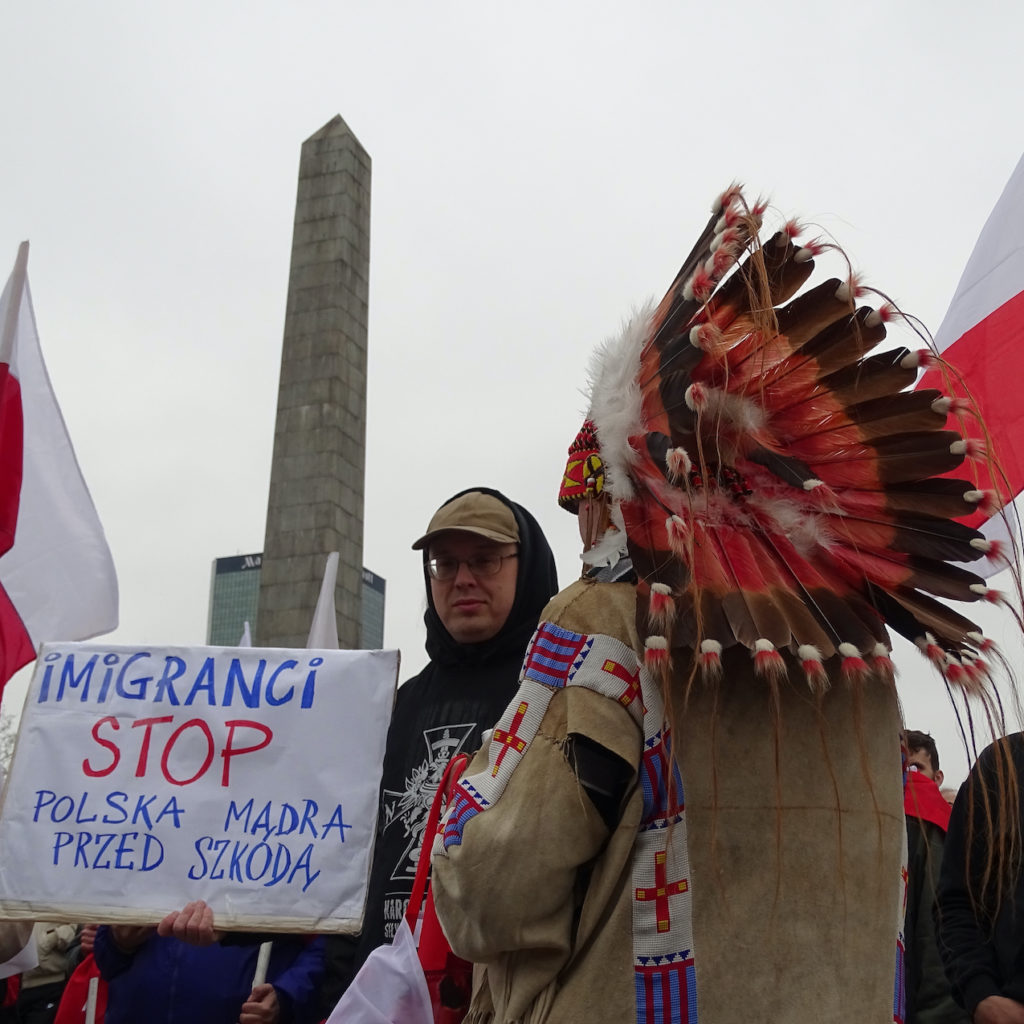 Nativism is the political policy of promoting the interests of native inhabitants against those of immigrants, including by supporting immigration-restriction measures. In scholarly studies “nativism” is a standard technical term. Those who hold this political view, however, do not typically accept the label. Ozgur Dindar wrote, “Nativists do not consider themselves [to be] nativists. For them it is a negative term and they rather consider themselves as ‘patriots’.”

The most prominent American nativist organization of the 19th century was the Know-Nothing party, which flourished originally in the 1840s and experienced a revival in the 1880s. The Ku Klux Klan was also notable for its nativist sentiment. The late 20th century witnessed a revival of nativism, particularly in Western Europe and in parts of the US. Following the dissolution of the Soviet Union and the collapse of the economies of many Eastern European nations, workers from those countries emigrated to the West. Western European nations also experienced an influx of Asian immigrants, and the US became home to many immigrants from Latin America. Consequently, France, Germany, Great Britain, and the US, among others, imposed stricter immigration laws and controls on migrant labor.

According to Joel S. Fetzer, opposition to immigration commonly arises in many countries because of issues of national, cultural, and religious identity. The phenomenon has been studied especially in Australia, Canada, New Zealand, the UK, and the US, as well as in continental Europe. Thus, nativism has become a general term for opposition to immigration based on fears that immigrants will “distort or spoil” existing cultural values. In situations where immigrants greatly outnumber the original inhabitants, nativist movements seek to prevent cultural change. Contemporary opponents of immigration often scapegoat immigrants for many of the same problems that Adolf Hitler blamed on Jewish people, including unemployment, crime, harm to the environment, housing shortages, and overwhelming social services such as hospitals and police.

Immigration restrictionist sentiment is typically justified with one or more of the following arguments against immigrants: i) Immigrants acquire jobs that would have otherwise been available to native citizens, limiting native employment; they also create a surplus of labor that lowers wages. ii) Immigrants do not pay enough taxes to cover the cost of the services they require. iii) Immigrants make heavy use of the social welfare systems. iv) Immigrants reduce house vacancies, causing rent increases. v) Immigrants isolate themselves in their own communities and refuse to learn the local language. vi) Immigrants will outnumber the native population and replace its culture with theirs. vii) Immigrants damage a nation’s sense of community based on ethnicity and nationality. viii) Immigrants increase the consumption of limited resources. ix) Immigration contributes to overpopulation.

Uri Friedman wrote in an article that there is a reason the word “nativism” appears regularly in the US media and not elsewhere: According to Mudde, nativism is an almost exclusively American concept that is rarely discussed in Western Europe. The term’s origins lie with mid-19th century political movements in the US—most famously the Know Nothing party—that portrayed Catholic immigration from countries such as Germany and Ireland as a grave threat to native-born Protestant Americans…

“Nativism arose in a natural place: a nation constructed through waves of migration and backlashes to migration, where the meaning of ‘native’ is always evolving. Europeans tend to talk about ‘ultra-nationalism’ or ‘xenophobia’ or ‘racism’ rather than nativism,” said Mudde. But this language, in his view, doesn’t fully capture the phenomenon, which “isn’t just a prejudice [against] non-natives” but also “a view on how a state should be structured.”

According to an article by Takis S. Pappas, the distinction between populists and nativists is somewhat more complicated, and hinges on the two groups’ contrasting relations with liberalism. He defines nativism in terms of acceptance of and approaches toward the cross-cutting cleavages of modern society, as well as a commitment to the rule of law and minority rights. “Empirically, we can identify nativist parties by focusing on ten specific conditions, including a negative stance on immigration, right-wing policy positions, a programmatic orientation, weak or collective leadership, and a rejection of the division made by populists between ‘the people’ and an elite,” writes Pappas.

In another article Pappas says that the group of nativist parties is larger and among its most important representatives one finds Austria’s Freedom Party (FPÖ); the Dutch Party for Freedom (PVV); the Danish People’s Party (DF); Norway’s Progress Party (FrP); the Sweden Democrats (SD); the Finns (PS, formerly known as the True Finns); the Swiss People’s Party (SVP); the UK Independence Party (UKIP); the more recent Alternative for Germany (AfD); as well as the Italian League (La Lega), which is currently undergoing a transformation from regionalist and secessionist into a purely nativist party.

Ian Jack writes “We called it racism, now it’s nativism. The anti-migrant sentiment is just the same” in an article in the Guardian and he adds that some people “use ‘nativism’ to signify a more elevated approach to the immigrant/refugee question; it offers something more opaque and less cliched than a simple disavowal of racism.”

Mudde says in another article published by the Guardian that the populist radical right combines populism with two other core ideological features, authoritarianism and nativism. Defining nativism as an ideology that holds that states should be inhabited exclusively by members of the native group (“the nation”), and that non-native people and ideas are fundamentally threatening to the homogenous nation-state, Mudde asserts that “within the core ideology of the populist radical right, populism comes secondary to nativism, and within contemporary European and US politics, populism functions at best as a fuzzy blanket to camouflage the nastier nativism.”

Mudde also called journalists not to let the radical right get away with that and added that “They should not allow the popularity of the term populism to mask the nativism of the radical right. Because it’s only when we know exactly what is threatening our liberal democracies that can we effectively defend them.”

‘Activating the socialist past for a nativist future: Far-right intellectuals and the prefigurative power of multidirectional nostalgia in Dresden’. Social Movement Studies, forthcoming (2020).

Recontextualising fascist ideologies of the past: Right-wing discourses on employment and nativism in Austria and the United Kingdom — JE Richardson, R Wodak, Critical Discourse Studies, 2009, 6 (4), 251-267.

Spierings, N., Lubbers, M. & Zaslove, A.S. (2018). ‘Sexually modern nativist voters’: Do they exist and do they vote for the populist radical right? In C. Miller-Idriss & H. Pilkington (Eds.), Gender and the radical and extreme right: Mechanisms of transmission and the role of educational interventions (pp. chapter-5). London: Routledge.

Recontextualising fascist ideologies of the past: right-wing discourses on employment and nativism in Austria and the United Kingdom — Richardson, J., Wodak, R. 11/2009 In: Critical Discourse Studies. 6, 4, p. 251-267. 17 p.

Against the ‘green totalitarianism’: anti-Islamic nativism in contemporary radical right-wing populism in western Europe — Betz, Hans-Georg 2007; Europe for the Europeans: the foreign and security policy of the populist radical right.