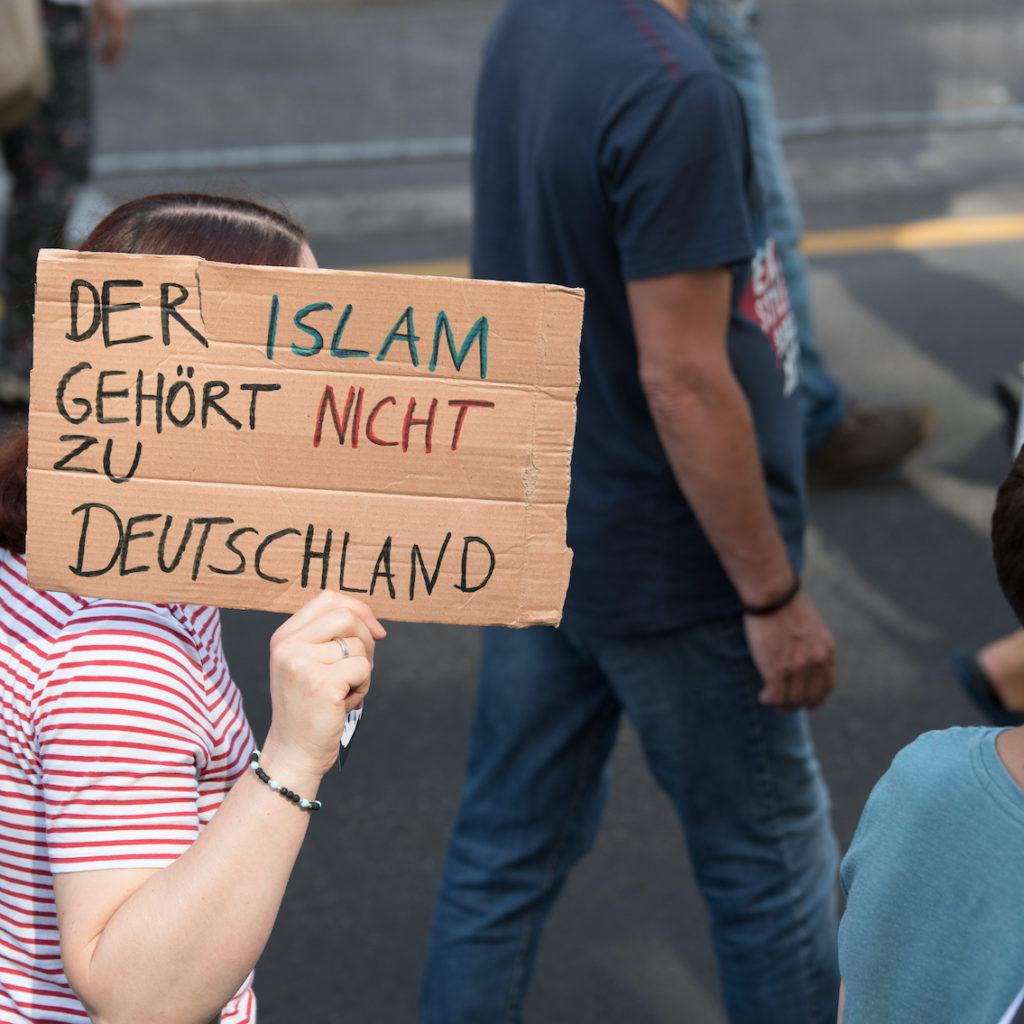 A woman is holding a sign stating that "Islam does not belong to Germany" during a women's rights demonstration in Berlin, Germany on June 9, 2018.

Secularism and Islamophobia are absolutely core to secularist nativism, but they are, as terms, too broad to identify the specificities of contemporary right-wing discourse, according to an article by Josip Kešić and Jan Willem Duyvendak. They say such nativist contestations do not so much revolve around religion in general or Islam per se; indeed, they tell us as much about the so-called ‘natives’ as about Muslims as a threat.

Characteristic of secularist nativism is the equating of immigration and Islamization, according to Kešić and Duyvendak, and the framing of immigration as a problem of cultural difference, the reducing of such difference to an Islam-versus-national-culture dichotomy and the viewing of Islam as a threat to the national culture. “The other essential feature of secularist nativism, next to liberal sexuality and gender relations, is what they call cultural Christianity. The adjective refers to the fact that, in secularist nativism, Christianity is invoked ‘as a cultural and civilizational identity, characterized by putatively shared values that have little or nothing to do with religious belief or practice’,” the authors underlined.

On the other hand,according to an article by Kabir Tambar, in much of the Muslim world, secularization has proceeded through the modernizing mechanisms of the region’s various states. However, he says, political events in Turkey present a dramatic contrast to this historically established antagonism between secularization and populist politics. “In the spring of 2007 a series of mass demonstrations, rallied in the name of secularism and against the elected Islamist regime, were conducted in several of Turkey’s major urban centers. The figure of the secularist crowd provides an image of secularism grounded not in the coercive apparatuses of the military and the modernizing bureaucracy but in an assertion of populism,” he reminds.

According to an article by Jose ́ Casanova, secular Europeans tend to look askance at blatant expressions of racist bigotry and religious intolerance coming from xenophobic nationalists and religious conservatives. But when it comes to Islam, secular Europeans also tend to reveal the limits and prejudices of modern secularist toleration. “One is not likely to hear among liberal politicians and secular intellectuals explicitly xenophobic or antireligious statements. They will insist that they welcome each and all immigrants, irrespective of race or religion. But they will tend to add, ‘as long as they are willing to respect and accept our modern, liberal, secular European norms’,” says Casanova and adds that “The explicit articulation of such norms may vary from country to country, from laicist France to corporatist Germany. But, in fact, one sees similar trends of restrictive legislation directed at Muslims, in liberal Holland as much as in secular Lutheran Denmark, precisely in the name of protecting their liberal, tolerant traditions from supposedly illiberal, fundamentalist and patriarchal customs, reproduced and transmitted to younger generations by Muslim immigrants.”

A comparative look at Islam across the Atlantic seems to point to the fact that such an anti-Muslim nativist complex is not emerging in the US precisely because both the association of immigration and Islam and secularist anti-religious prejudices against Islam are much weaker in the United States than in Europe.

According to Casanova, “in Europe, the identification of immigration and Islam has contributed to a superimposition of different dimensions of otherness that tend to exacerbate issues of boundaries, accommodation and incorporation. All too often, the immigrant, the religious, the racial and the socioeconomic disprivileged ‘other’ appear to coincide. In the United States by contrast Muslims constitute a small minority, no more than 10 percent of the new post-1965 immigrants. Moreover, approximately one-third of Muslims in the United States are African- American converts, making the identification of Islam and immigration less relevant.”