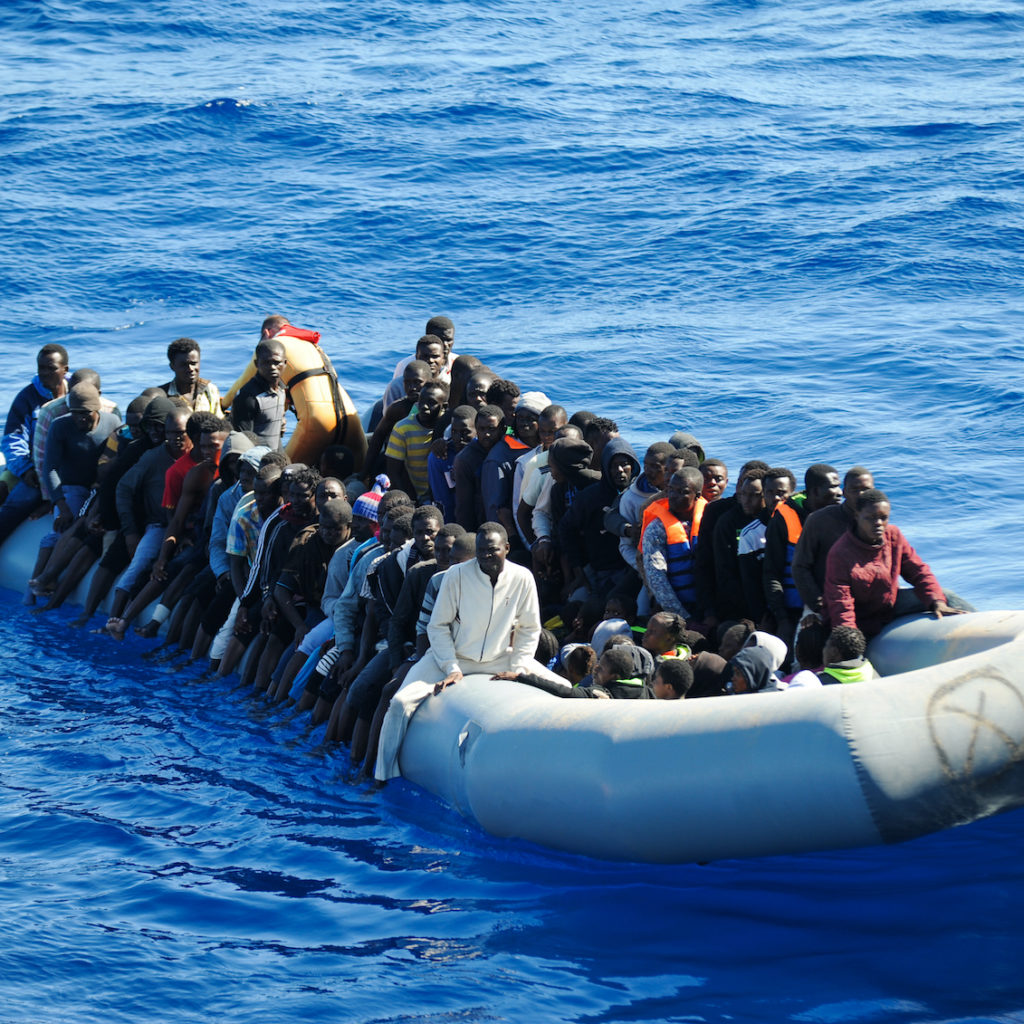 African immigrants are seen on a small rubber boat in the Mediterranean Sea on March 3, 2019.

Immigration is the international movement of people to a destination country of which they are not natives or where they do not possess citizenship in order to settle or reside there, especially as permanent residents or naturalized citizens, or to take up employment as a migrant worker or temporarily as a foreign worker. As for economic effects, research suggests that migration is beneficial both to the receiving and sending countries. Research, with few exceptions, finds that immigration on average has positive economic effects on the native population, but is mixed as to whether low-skilled immigration adversely affects low-skilled natives.

According to a Stanford University report written by Anna Grzymala-Busse ,Frank Fukuyama, Didi Kuo and Michael McFaul, addressing immigration challenges requires political debate, creative policymaking, and principled leadership. On this score, mainstream parties in both Europe and the United States are seen as having failed to address public fears and concerns about immigration. The authors wrote that “They struggle to articulate precisely the potential tradeoffs associated with immigration. For example, supporters of increased immigration point out that immigrants are more likely to be more entrepreneurial than to commit crimes, but opponents maintain that immigrants are more likely to rely on welfare services. Neither side addresses the other’s contentions. Immigrants are then blamed for the current grievances of the working class, who feel that immigrants ‘cut in line’ and obtain jobs, schooling, and other opportunities that rightfully belong to others.”

To authors, this “us-versus-them” framing of legitimate public policy issues impedes genuine reform. Further, while racism and xenophobia can drive anti-immigrant sentiment, so does the perceived flaunting of immigration laws. “If liberal democracies claim to observe the rule of law, then their failure to legally and formally regulate immigration belies these commitments. Countries like Canada and Australia that have admitted much larger number of immigrants proportionally than the United States nonetheless have not experienced serious populist movements, because there is virtually no illegal immigration to either country,” wrote the authors.

Meanwhile, according to an article by Matthew Goodwin, followers of radical and extreme right parties, often believe that a crisiswill bring them to power. As the old economic and political order breaks down they will be propelled into office by insecure and anxious voters, who are looking for parties that project discipline, strength and a nationalist ethos. He wrote that “Increased migration into Europe which began in the 1980s coincided with the Great Recession in 2008 and led to greater movement within Europe after the Schengen Agreement and enlargement of the EU. Unlike the economic turmoil in the 1930s, which erupted in countries that had little experience of multiculturalism, the Great Recession in 2008 emerged amidst a period of rising ethnic and cultural diversity.”

Goodwin continued “This appears especially important given a long tradition of research that suggests that both a decline in economic conditions and an increase in the size of minority populations are central to explaining increased prejudice in society. For example, studies have shown that public hostility toward immigrants is often strongest among economically insecure citizens, while at the extreme end of the spectrum outbursts of violence against minorities have also been traced to fears over growing economic competition. The crisis may have increased public concern over threats to national identity, anxiety over the effects of immigration and the general availability of scarce resources given this increased ‘ethnic competition’.”

According to Goodwin, these observations help to explain why the post-2008 crisis was followed by many predictions from commentators that Europe would witness an upsurge in public support for radical and extreme right-wing parties that are defined by their desire to protect the native group from ‘threatening’ others, to uphold traditional authoritarian values and attack established politicians for betraying the people. This is an old view, as it has long been argued that during periods of economic decline political actors assume an important and often manipulative role by targeting resentments and encouraging group conflict.

“In contemporary Europe the radical right targets economically vulnerable voters through a range of nativist, authoritarian and populist policies,” pointed Goodwin and added that “Aside from framing migrants, asylum-seekers and settled minority groups as a threat to resources, the radical right often advocates a position of ‘national preference’, arguing that the native group should be prioritized when distributing scarce resources. Some of these parties have also devoted greater effort to opposing globalization and the European Union, offering economically protectionist messages to their struggling blue-collar voters.”

This need to define “the people” and circle the wagons is why immigration is such a powerful weapon for populists. A focus on historical grievances toward immigrants allows populists to redefine “the people” to suit their political ends – and in particular, to argue the narrative that they are defending the cultural, political, and economic interests of their nation and citizens as victims of injustices brought about by an onslaught of immigrants. Strikingly, where immigration is more stringently regulated, as in Canada or Japan, populists struggle to use it as fodder for mobilization.

“In Europe, the refugee crisis in 2015 raised fears and benefited the populists. In Italy, for example, the rise of Matteo Salvini and the Lega nativist party was directly related to the closing of the Balkan route for immigrants from the Middle East, which subsequently channeled large numbers of immigrants into Italy. Even in countries where politicians openly refused to admit their quota of immigrants (most of Eastern and Central Europe), populists benefited from their purported defense of “national purity.” In addition to espousing welfare chauvinism, right-wing populists in Europe further claim to defend women’s and gay rights against the threat of Muslim cultural conservatism,” said the Stanford report.

Many argue that rising immigration can lead to greater support for populism. According to an article by Guillermo de la Dehesa, in the US, the percentage of the American population that is foreign-born almost tripled between 1970 (4.7 percent) and 2014 (13.7 percent), with Mexican-born immigrants constituting a substantial proportion of this recent growth. It is thus easy to see why Trump’s 2016 election campaign targeted Mexican immigrants, particularly undocumented immigrants, claiming that a crackdown on immigration was necessary to “make America great again”. During his campaign, he referred to Mexican immigrants as “rapists and criminals” and promised to build a “big, beautiful wall” along the Mexican border. To the article of de la Dehesa, evoking nostalgia for America’s past greatness partly explains why a large proportion of Trump’s supporters were white (especially those without a college degree), male, and older (aged 65 and above).

Bolin, N. (2015). The Impact of the Swedish Populist Radical Right on the Immigration Agendas of the Established Parties and their MPs. Paper presented at the 2nd International Conference on Public Policy, July 2015, Milan, Italy.

Categories of analysis and categories of practice: a note on the study of Muslims in European countries of immigration — Brubaker, Rogers; Ethnic and Racial Studies, 01 January 2013, Vol.36(1), pp.1-8.

The Return of Assimiliation? Changing Perspectives on Immigration and Its Sequels in France, Germany, and the United States — Brubaker, Rogers; Ethnic and Racial Studies, July 2001, Vol.24(4), pp.531-548.

Filindra, A. and J. Junn (2012) “Aliens and People of Color:  The Multidimensional Relationship of Immigration Policy and Racial Classification in the U.S.,” in D. Tichenor and M. Rosenblum, eds. Oxford Handbook of International Migration. Oxford, UK: Oxford University Press, pp. 429-455

Filindra, A. (2013) “What to Make of the Golden Dawn? The Crisis of Welfare Capitalism, Immigration and the New Spring of the Extreme Right,” Migration and Citizenship, 1(2):57-59.

Ivarsflaten, E; Blinder, S. and Ford, R (2010) “The anti-racism norm in Western European immigration politics: Why we need to consider it and how to measure it.”, Journal of Elections, Public Opinion and Parties Vol 20 (4): 421-45.

Acceptable and Unacceptable Immigrants: How Opposition to Immigration in Britain is Affected by Migrants’ Region of Origin — Ford, Robert; Journal of Ethnic and Migration Studies, 2011, Vol.37(7), pp.1017-1037.

Hagelund, Anniken. (2004). The constitutive outside of decency. Racism in immigration political discourse in Norway. Tidsskrift for samfunnsforskning. 45. 3-29.

L. Morales, ‘Assessing the Effects of Immigration and Diversity in Europe’, Journal of Elections, Public Opinion and Parties, 2013, vol. 23(3).