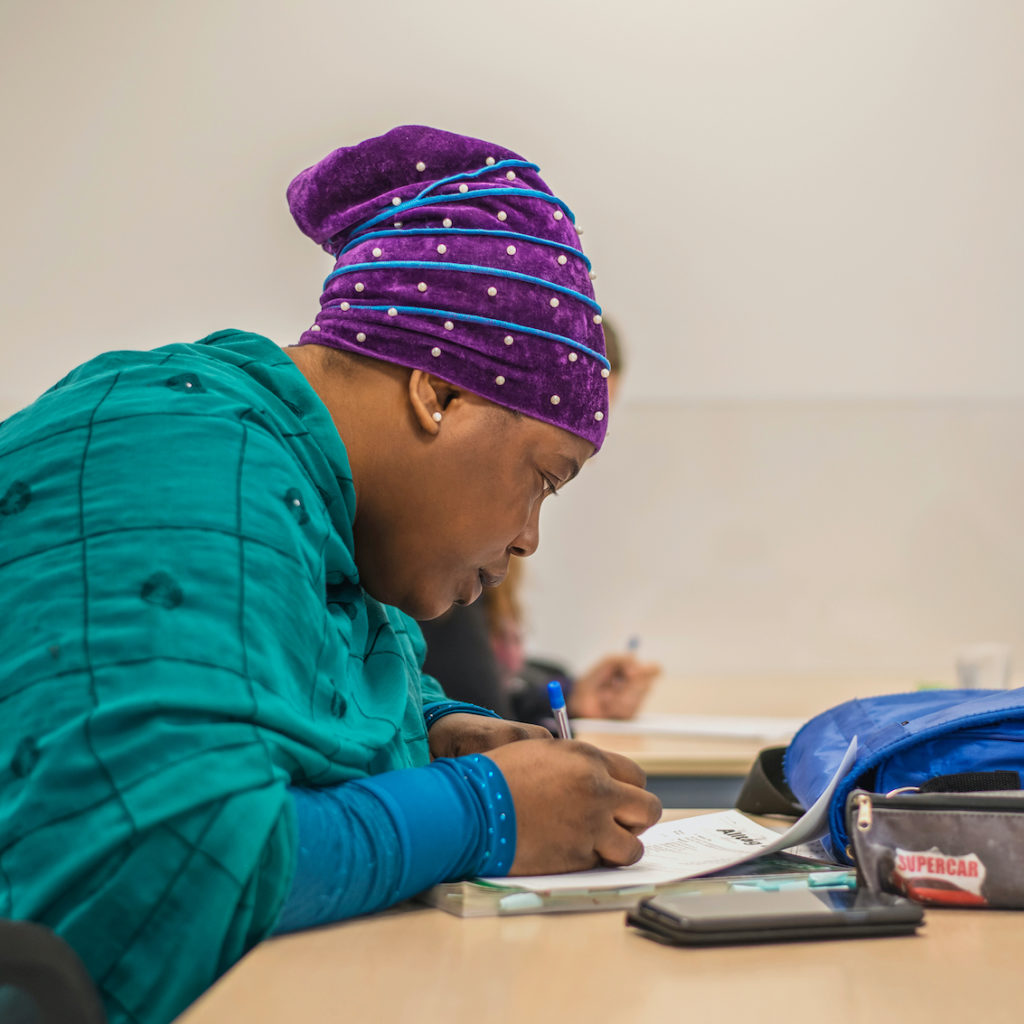 A migrant woman from Africa in national clothes is trained in German at a language school in Halle (Saale), Germany on May 24, 2018.

There is no consensus on a single definition for integration. Definitions share commonalities but remain highly context- or country-specific. Nevertheless, migrant integration may be broadly defined as the process by which migrants become accepted into society, both as individuals and as groups… Integration refers to a two-way process of adaptation by migrants and host societies… and implies consideration of the rights and obligations of migrants and host societies, of access to different kinds of services and the labor market, and of identification and respect for a core set of values that bind migrants and host communities in a common purpose.

According to an article published by Migration Data Portal, integration occurs in the public and private realms, across generations, and at the individual, family, community and national levels. Some typical indications of successful migrant integration are the decrease of the differences between migrants and non-migrants according to data on employment, education, health and social inclusion, among other areas. A research on OECD countries shows that migrants in most countries have on average worse outcomes than the native-born population in areas such as education attainment and labor market participation. This is interpreted as a sign of persisting barriers to effective integration. Integration outcomes depend on many factors including the country of origin, the host community context and the skill level of immigrants.

Migrant integration has gained prominence on the global agenda with the advent of the 2030 Sustainable Development Agenda’s call to “leave no one behind”—including migrants. The field of migrant integration, however, has traditionally been polarizing and related data are generally limited to high-income countries. The increased interest in migrant integration highlights the need for more research and better data.

Integration cuts across different policies and various aspects of migrants’ lives and therefore data on migrant integration cover a wide range of information, including whether migrants are integrating into the economic, social, cultural, and political spheres of society, the discrimination they face, how policies affect migrants’ inclusion, and how the public perceives migrants and immigration.

According to Anne Gallagher, president of International Catholic Migration Commission, integration is the delicate, critical transition of the migrant from outsider to insider – the process by which migrants become a part of their new community. Successful integration is hard to measure because it is multilayered, touching every part of the migrant experience, from education to housing, political participation and civic engagement.

Gallagher points that integration failures have deeper, darker effects that are too often ignored and these effects have always been exploited by populist groups. For example, public opinion about the value of migration appears closely tied to perceptions about integration. Gallup’s Migrant Acceptance Index confirms that attitudes to migration are much more positive in the US and Australia, which both have a strong record when it comes to integration, than in Europe, where integration has been much more problematic.

Migration is a reality in today’s EU. According to data from Eurobarometer, approximately 20 million non-EU nationals reside in the EU, making up 4 percent of its total population, and further flows of migration will be a feature of the 21st century. It is therefore imperative that effective policies for the integration of third-country nationals are developed in the EU. In order to better understand the challenges of integration, it is necessary to have a clearer understanding of the public opinion on the issue. European electoral data shows that the rise in immigration flows and the surge in electoral support for populist parties are closely aligned.

According to an article written by Lee Robinson and Anita Käppeli, even Sweden doesn’t seem to be immune to the Europe-wide trend of hostility to migration, as a significant 17.5 percent of the vote went to the Sweden Democrats, a populist, anti-immigration party. This is even more surprising given Sweden’s reputation for openness and successful integration. In early 2018, 73 percent of Swedes surveyed by Eurobarometer think that integration has been unsuccessful, 61 percent think immigrants worsen crime problems, and 58 percent think they are a burden on the welfare system. It is these last two concerns that the right-wing populist Sweden Democrats seem to have spoken to, as their political message includes maligning refugees as threatening the welfare system and driving crime.

Many populists view immigrants and their integration process as both a cultural and an economic threat to the “people,” and have rallied support around policies designed to limit immigration, preserve cultural homogeneity, and reduce the economic strain produced by immigrants. Concerns about the enforcement of existing immigrations laws, and about the integration and assimilation of immigrants into their new home countries are shared more broadly—but they are often also exploited by populist politicians as evidence of the corrupt elite status quo, and the need to redefine the nation.

Mügge, Liza M. & Marleen van der Haar (2016) ‘Who is an immigrant and who requires integration? Categorising in European policies’ in R. Penninx & B. Garcés-Mascareñas eds., Integration of migrants into what? A State of the Art of Integration Processes and Policies in Europe. Dordrecht: Springer, pp. 77-90.

The public view of immigrant integration: multidimensional and consensual. Evidence from survey experiments in the UK and the Netherlands — Sobolewska, M., Galandini, S. & Lessard-Phillips, L., 2017, In: Journal of Ethnic and Migration Studies. 43, 1, p. 58-79 22 p.

“Does Mandatory Integration Matter? Effects of Civic Requirements on Immigrant