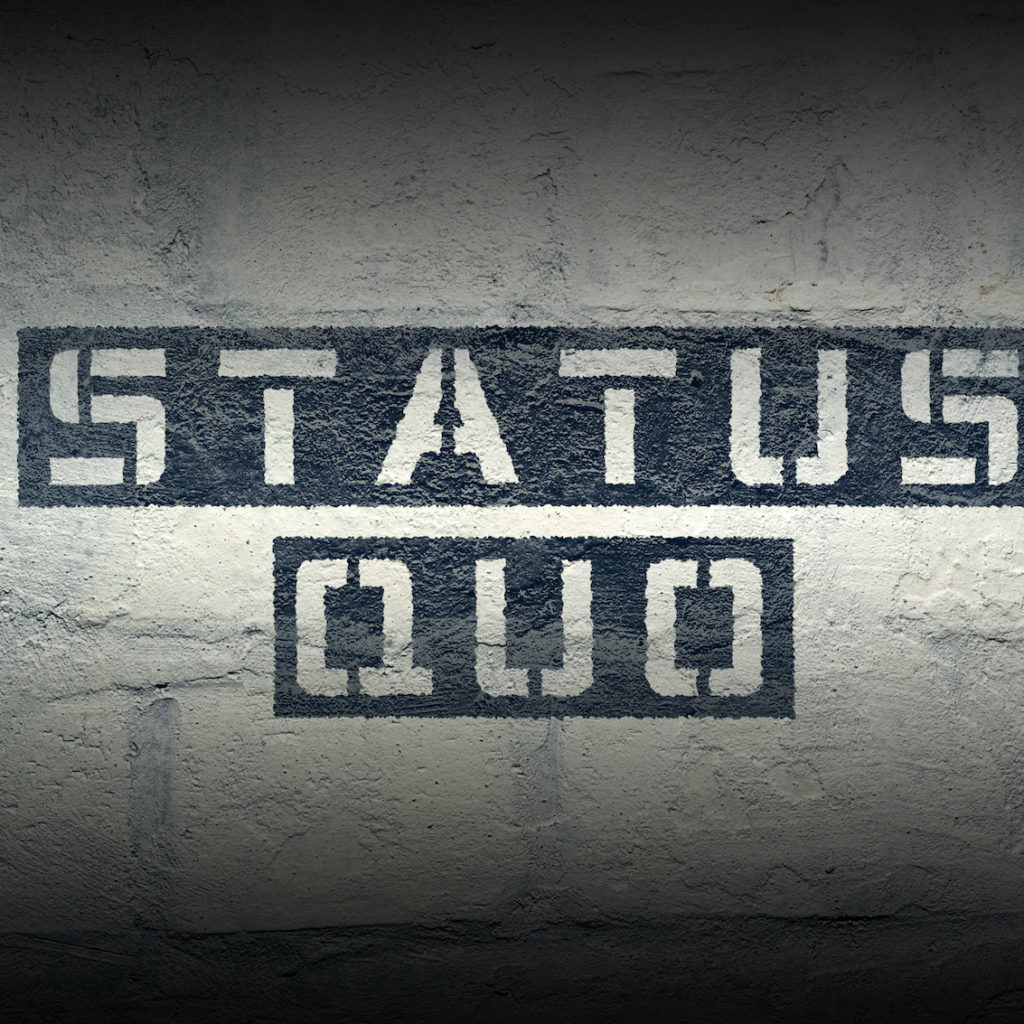 Status quo is a Latin phrase meaning the existing state of affairs, particularly with regard to social or political issues. In the sociological sense, it generally applies to maintain or change existing social structure and values. With regard to policy debate, the status quo refers to how conditions are at the time and how the affirmative team can solve these conditions. To maintain the status quo is to keep the things the way they presently are.

Social movements are an example of times when the status quo might be challenged. In these instances status quo refers to the current state of affairs around a particular issue, or perhaps the current culture or social climate of an entire society or nation. The status quo is generally perceived negatively by supporters of the social movement, and people who want to maintain the status quo can be seen as being resistant to progress.

“Populists are disruptive,” stated Benjamin Moffitt and Octavia Bryant in an article and added that “They position themselves as outsiders who are radically different and separate from the existing order. So, they frequently advocate for a change to the status quo and may champion the need for urgent structural change, whether that is economic or cultural. They often do this by promoting a sense of crisis (whether true or not) and presenting themselves as having the solution to the crisis.”

According to Moffitt and Bryant, populists often want to transform the status quo, ostensibly in the name of the people and that means they can appear threatening to the democratic norms and societal customs many people value. And the very construction of ‘the people’ plays a large part in populists being perceived as ‘bad’, because it ostracizes portions of society that don’t fit in with this group.

Claiming that elite politicians warn people about the threat ‘populism’ poses to stability, articles in illustrious journals tell us about the rising ‘populist’ threat to democracy, and pundits use the term to put both the far right and the radical left in the same basket, as just so many challengers to the status quo, Giorgos Venizelos writes in an article that “Even if these figures lack any shared or scientific definition of populism, they each locate this phenomenon somewhere in terms of ‘lies’, ‘demagogy’, ‘extremism’ and ‘attempting to mislead the masses.’”

Venizelos reminds the fact that, in recent years, and especially since the Brexit vote and the election of Donald Trump, the word has appeared with accelerating frequency, serving to explain all sorts of political events; particularly, those events that are conventionally associated with something negative, something that stands at odds with the status-quo. However, he says “When public intellectuals treat ‘populism’ in merely moralist and alarmist terms, they are not just defending the status quo. They also hamper our ability to locate the changing organizational patterns of party politics, identify the rise of new political cleavages rooted in a decline of traditional economic identities and political identification, and understand the changing nature of class antagonism and the complex processes of collective identity formation.”

Similarlar, Jason Glynos and Aurelien Mondon also wrote in an article that the ‘hyped’ response to the 2014 electoral outcomes exaggerated the political significance of the populist phenomenon by suggesting that right-wing populist parties and movements are the only (or main) political alternative to the mainstream status quo. They wrote that “while the Front National (FN) and UKIP have had a clear impact on the political agenda as their programme and discourse entered the mainstream, we argue that this impact was not simply a reflection of their electoral or strategic achievements, but also a product of the exaggerated role attributed to the FN and UKIP by mainstream politicians and commentators.”

According to the scholars, the nexus of social, political, and fantasmatic logics is thus deployed to analyze and interpret the discursively constructed character of practices, including the way the status quo is protected, challenged, and defended. “In light of this theoretical framework, the political logic of populist hype can be discerned by first getting a fix on the character of the status quo. In other words, a political logic can be identified only in relation to particular norms that are the subject of protection, challenge or defense,” said Glynos and Mondon.

“Who is afraid of a change? Ideological differences in support for the status quo in direct democracy.” Andrea De Angelis, Davide Morisi and Celine Colombo, Journal of Elections, Public Opinion & Parties, 2019.