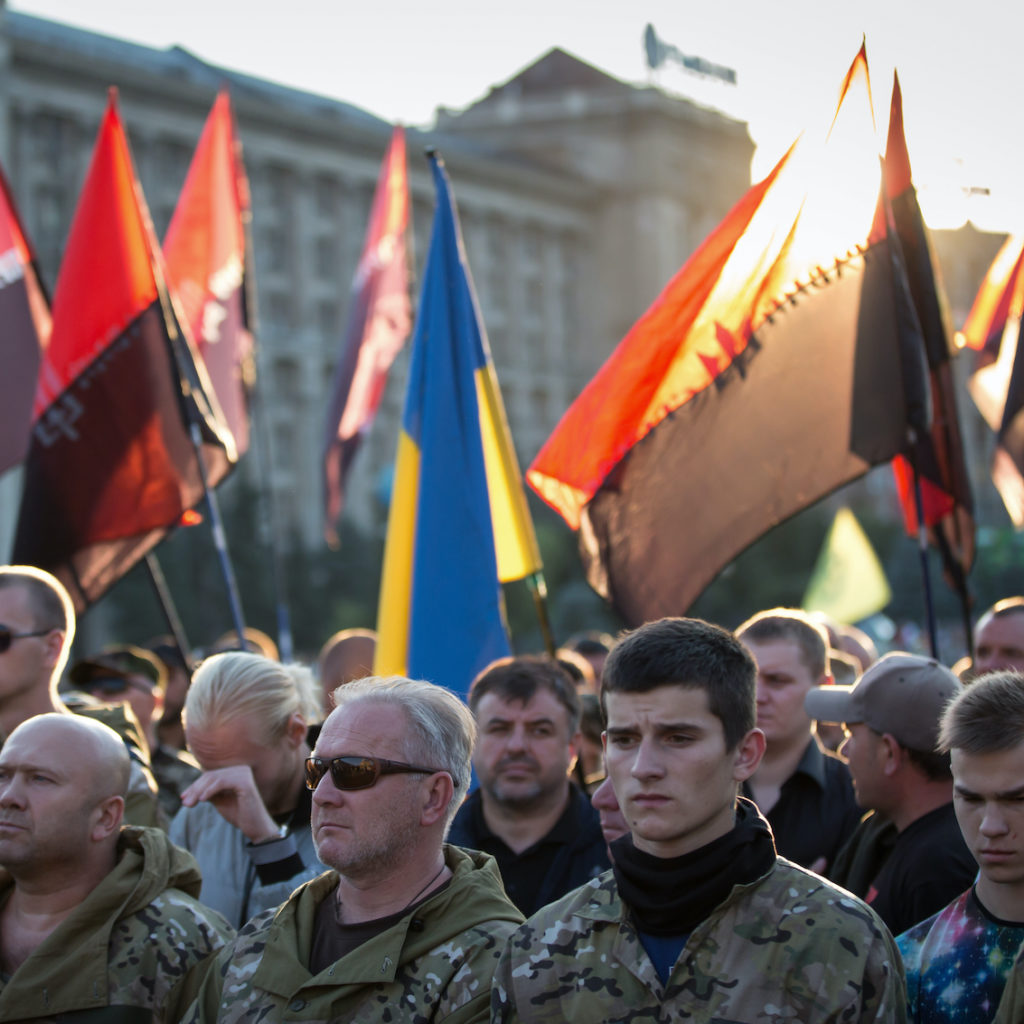 Members of the far-right radical group Praviy Sektor (Right Sector) and their supporters attend an anti-government rally in central Kyiv, Ukraine on July 21, 2015.

Different labels such as ‘extreme right’, ‘far right’ and ‘populist radical right’ (PRR) are used interchangeably to refer to the same organizations, such as the French Front National (FN), Austrian Freedom Party (FPÖ) and Flemish Bloc/Flemish Interest (VB), according to an article written by Tim Immerzeel and Jasper Muis. A consensus has emerged that they constitute one single family. Meanwhile, Cas Mudde have been using the term “populist radical right” in an article for a core ideology that combines nativism, authoritarianism, and populism. According to Mudde, most studies focus largely on the same parties and ideological core, even if they use different terms and definitions.

According to an article jointly written by Katy Brown, Aaron Winter and Aurelien Mondon, while much of the media has been happy to settle for the terms ‘populism’, ‘populist’ and ‘populist parties’, the picture is somewhat different for academics. In 2007, Mudde, one of the foremost experts in the field of populism and political extremism, rightly warned that such parties should be called ‘populist radical right’ as opposed to ‘radical right populist’, as the latter would put the emphasis on populism (a secondary characteristic) away from radical right. However, this nuance appears to have been lost on many, feeding the growing hype about populism, and avoiding the careful work done by many others on typology and terminology, as well as rigorous analysis, over the years.

Mudde writes that establishing boundaries between populist radical right parties and mainstream right-wing parties has been significantly complicated by the rise of populist radical right politics in Europe, i.e. nativist, authoritarian, and populist discourses and policies from mostly mainstream parties. For example, he says, as a consequence of the political debates around the Eurozone crisis and refugee crisis in 2015, it is almost impossible to use Euroscepticism and opposition to immigration as ideological features/policy positions that set populist radical right parties apart from mainstream (right-wing) parties. “And if scholars insist on including West European borderline parties such as the FrP and UKIP, then how can they exclude much more radical East Central European parties like Fidesz- Hungarian Civic Alliance in Hungary and Law and Justice (PiS) in Poland?” he asks.

To Mudde, the proliferation of populist radical right parties has made this group of parties larger and more heterogeneous. According to him: i) There are substantial differences in terms of ideology. In the broad approach, used in particular by many quantitative scholars, populist radical right parties include the neo-Nazi Golden Dawn in Greece as well as neoliberal populists like the FrP and UKIP and everything in between. ii) There are important differences in origins; some populist radical right parties are radicalized mainstream parties (like FPÖ and SVP) while others are moderated extremist parties (like Sweden Democrats). iii) The parties differ in terms of longevity and stability: National Front (FN) was founded almost 45 years ago and has been a relatively stable feature of French politics since the mid-1980s, Dutch List Pim Fortuyn (LPR) and the LPR were mere flash parties, while Alternative for Germany (AfD) and Dawn of Direct Democracy (now Dawn-National Coalition) in the Czech Republic are less than a decade old. iv) Here is a significant variety in terms of organization, from the one-member PVV of Geert Wilders, through modern cadre parties like the Sweden Democrats (SD) and DF, to more traditional mass parties like the FN and FPÖ.

According to Immerzeel and Muis, the most important common denominator of the populist radical right parties is their nativist stance. This exclusionist, ethno-nationalist notion of citizenship is reflected in the slogan ‘own people first’. The authors say that the label ‘radical’ refers to the non-centrist, outspoken position at the far end of the political spectrum on issues related to immigration and ethnic diversity. Since they strongly hold issue-ownership over immigration issues some scholars simply refer to the PRR as anti-immigration parties.

The scholars remind the opinions about radical right populism endangers some of the constitutional foundations of liberal democracies: pluralism and the protection of minorities. At the same, however, scholars agree that it distinguishes itself from political extremism, in the sense that PRR supporters and activists respect democracy, whereas extremist groups go beyond the limits of the procedures which define the democratic political processes.

Meanwhile, according to an article written jointly by Anders Backlund and Ann-Cathrine Jungar, populist radical right parties voice a populist critique of representative democracy by stating that the political representatives are unresponsive to the voters and turn a blind eye to the beliefs and preferences of ordinary people. The populist promise, by contrast, is the resurrection of the popular will by overcoming the distance between the representatives and the represented.

On the other hand, Backlund and Jungar say, while populist radical right parties are sometimes described as ‘protest parties’, empirical research has shown that voters primarily cast their ballots for the radical right in order to be represented in terms of policy, most notably opposition to immigration. “The combination of economically neoliberal and socio-culturally authoritarian policies was an electorally successful strategy for the radical right, there has been scholarly debate on which programmatic appeals constitute a ‘winning formula’,” they said.

Gruber, Oliver and Bale Tim (2014) And it’s good night Vienna. How (not) to deal with the populist radical right: The Conservatives, UKIP and some lessons from the heartland. British Politics, 9, pp. 237–254.

Moffitt, B. (2017) ‘Liberal Illiberalism? The Reshaping of the Contemporary Populist Radical Right in Northern Europe‘, Politics and Governance,vol. 5, no. 4, pp. 112-122.

“The Electoral Success of Radical Right in Europe: Why are the Radical Right better at “capitalizing” on Populism than the Radical Left?”, with James F. Downes, Public Seminar of The New School for Social Research,August 2018, online at: www.publicseminar.org/2018/08/the-electoral-success-of-the-radical-right-in-europe/