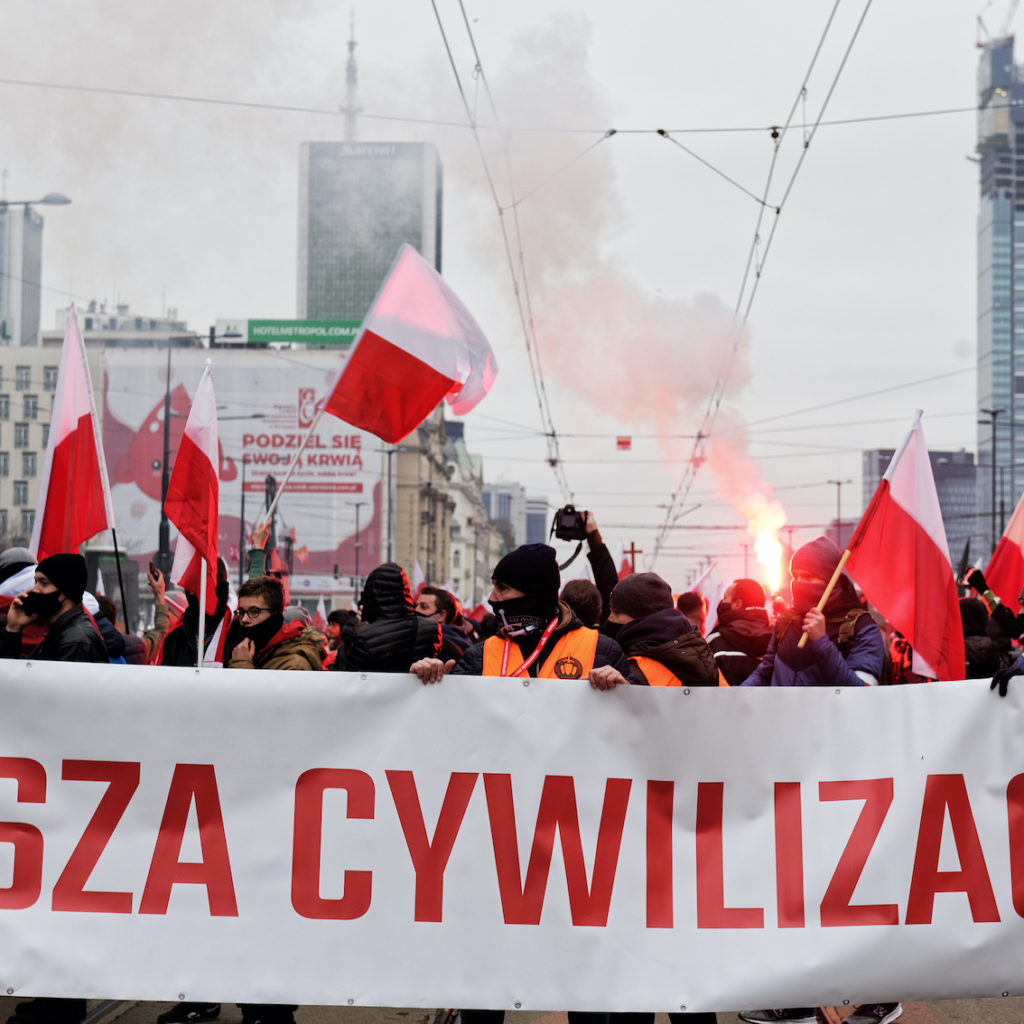 Ultra-nationalism is “extreme nationalism that promotes the interest of one state or people above all others”, or simply “extreme devotion to one’s own nation”. Ultra-nationalism combined with the notion of national rebirth (palingenetic ultra-nationalism) is a key foundation of fascism. According to Janusz Bugajski, “in its most extreme or developed forms, ultra-nationalism resembles fascism, marked by a xenophobic disdain of other nations, support for authoritarian political arrangements verging on totalitarianism, and a mythical emphasis on the ‘organic unity’ between a charismatic leader, an organizationally amorphous movement-type party, and the nation”.

On the other hand, palingenetic ultra-nationalism is a theory concerning generic fascism formulated by British political theorist Roger Griffin. The key element of this theory is the belief that fascism can be defined by its core myth, namely that of revolution in order to achieve a “national rebirth” — palingenesis. Griffin asserts that ultra-nationalism is essentially xenophobic and is known to legitimise itself “through deeply mythicized narratives of past cultural or political periods of historical greatness or of old scores to settle against alleged enemies”. It can also draw on “vulgarized forms of physical anthropology, genetics, and eugenics to rationalize ideas of national superiority and destiny, of degeneracy and subhumanness”.

Griffin argues that fascism uses the “palingenetic myth” to attract large masses of voters who have lost their faith in traditional politics and religion, by promising them a brighter future under fascist rule. More radical movements often want to overthrow the old order, which has become decadent and alien to the common man. This powerful and energetic demolition of the old ways may require some form of revolution or battle, but this is represented as glorious and necessary. Such movements thus compare the (recent) past with the future, which is presented as a rebirth of society after a period of decay and misery. The palingenetic myth can also possibly stand for a return to a golden age in the country’s history, so that the past can be a guidebook to a better tomorrow, with an associated regime that superficially resembles a reactionary one.

Griffin also wrote in a book that “Combined into a single expression, ‘populist ultra-nationalism’ precludes the nationalism of dynastic rulers and imperial powers before the rise of mass politics and democratic forces (for example that of the Habsburgs or the Pharaohs), as well as the populist (liberal) nationalism which overthrows a colonial power to institute representative democracy (for example that of Mazzini in the Italian risorgimento and of many Czechoslovakians in late 1989). In other words, populist ultra-nationalism rejects the principle both of absolutism and pluralist representative government.”

According to yet another article by Griffin, fascism is a political ideology whose mythic core in its various permutations is a palingenetic form of populist ultra-nationalism. He says, in addition, his ideal type suggests that ‘fascism’ became the generic term for populist palingenetic ultra-nationalism because fascism was the first organized form of this new ideological compound to succeed in entering a national political arena and in forming a regime. Revolutionary nationalists who aspired to awaken ‘the whole people’ elsewhere sensed the underlying kinship with Mussolini’s movement despite the enormous surfaces differences which separated it from their vision as a result of the uniqueness of the history and the political cultures of the nations concerned.

Meanwhile, Indian pundit Kanak Mani Dixit wrote in an article that “as it happened in some of east and the south Asian countries including India, when ultra-nationalism is attached to populism and deployed by the state, we are confronted with the most dangerous brew of all: it can be called ‘ultra-populism.’ It is deployed by the vanguards of the supremacist state, vigilantes with their verbal machetes ever-ready to ostracize and defenestrate. This is the point where society becomes psycho-socially subjugated and militarized even with the military confined to the barracks. The rock-bottom of exhibitionist ultra-nationalist behavior can actually be found in India.”