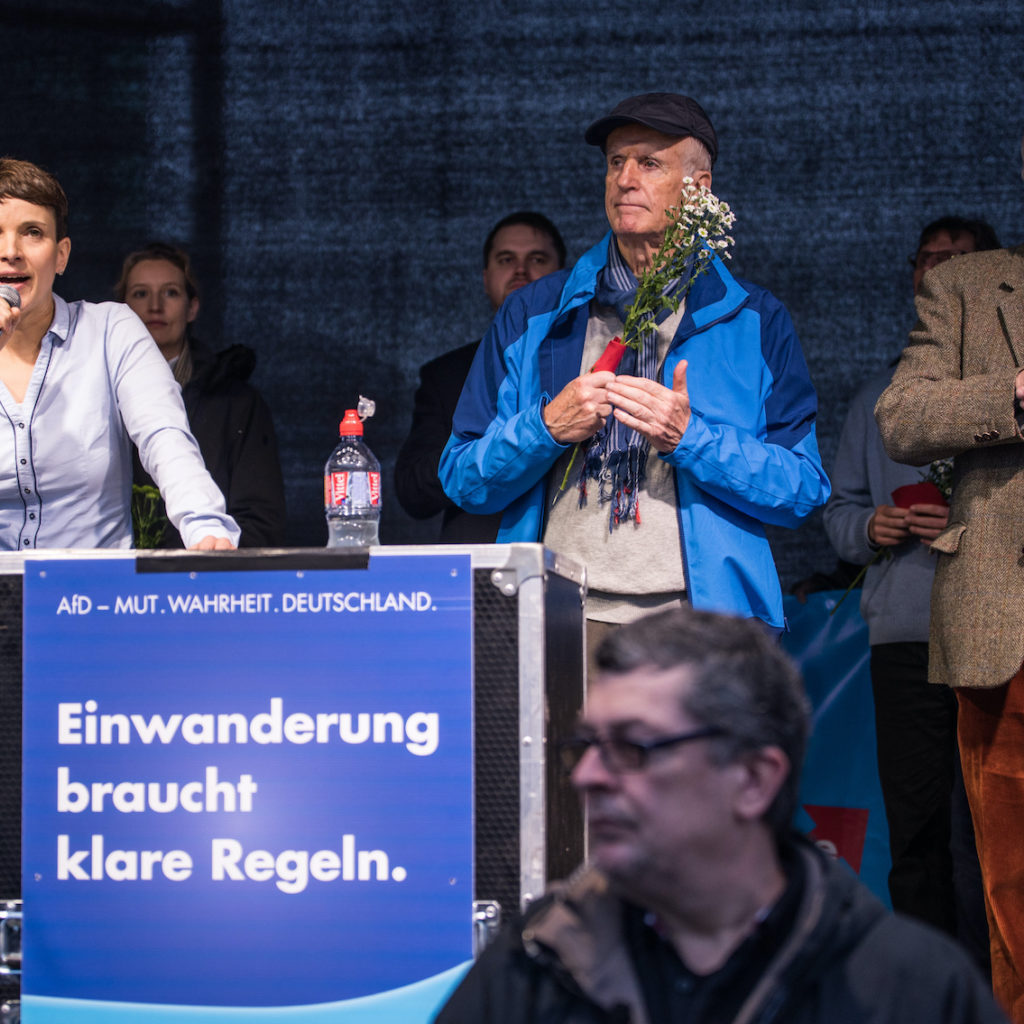 Frauke Petry is speaking at an AfD Demo in Berlin in November 2015. Petry shared his anti-Turkish ideas in articles published on the social media network Facebook.

Turkophobia, which is also known as anti-Turkism or anti-Turkish sentiment, is hostility, intolerance, or racism against Turkish or Turkic people, Turkish culture, Turkic countries, or Turkey itself. The term refers to intolerance not only against the Turks across all regions, but also against Turkic groups as a whole, including Azerbaijanis, Crimean Tatars and Turkmens. It is also applied on groups who developed in part under the influence of Turkish culture and traditions while converting to Islam, especially during Ottoman times, such as Albanians, Bosniaks and other smaller ethnic groups around Balkans during the period of Ottoman rule. It can also refer to racism against Turkish people living outside of Turkey following the Turkish diaspora.

The roots of anti-Turkism can be traced back to the arrival of the Huns in Europe. While the ethnic background of the Huns is a matter of dispute among historians, they are widely believed to have been of Turkic origin, and their invasion inspired fear among Europeans. In the Late Middle Ages, the fall of Constantinople and the Ottoman wars in Europe — part of European Christians’ effort to stem the expansion of the Ottoman Empire, the predecessor to Turkey — helped fuel the development of anti-Turkism.

After 1960s Turks gradually became a “prominent ethnic minority group” in some Western countries. But from the beginning, they were subject to discrimination. At times, when host countries adopted more immigrant-friendly policies, “only the Turkish workers were excluded” from them. In various European languages, the word “Turk” has acquired a meaning similar to “barbarian” or “heathen”, or is used as a slur or curse.

For instance, according to an article by Christian Ochsner and Felix Roesel, in the course of a change in party leadership in 2005, the Freedom Party of Austria (FPÖ), which is the main right-wing populist party in post-WWII Austria, strengthened its anti-immigration profile. Xenophobia was a political issue in the country since the early 1990s. In contrast to the previous decades, however, anti-Turkish and anti-Muslim campaigning became a main part of the party’s propaganda strategy after 2005.

Thus, only the FPÖ as the sole right-wing populist party that refer to anti-Turkish sentiments, gained additional support in municipalities with a record of Turkish violence, say Ochsner and Roesel. “Voters in once pillaged municipalities are thus prone to an information bias; they treat the campaign information differently and are in turn more willing to vote for the FPÖ, but not for other right-wing parties without any anti-Turkish or anti-Muslim campaigns,” the argue.

Meanwhile, Boyan Znepolski and Michel Wieviorka argues in their article that if the national populists discourse has integrated anti-Turkish attitudes, it is because part of the population has anti-Turkish attitudes. Meanwhile, Maria Ranieri states in her book that “The disappointment of the transition, from the inability of elites to work for the public interest and to build a functioning state are the social base that prepares and supports what is analyzed in the text.

Michał Krzyżanowski, on the other hand, asserts in his article that the use of anti-Turkish arguments in the Islamophobic context is especially significant as the FPÖ’s anti-Islam slogans are often ‘exemplified’ by references to members of Austria’s Turkish community stereotyped as consisting as if only of Muslims.

According to an article by Kemal İnat, the leading political movement with anti-Turkish sentiments in Germany is Die Linke (leftist party), whose member Gabi Zimmer is the leader of the ultra-left populist fraction GUE/NGL (European United Left – Nordic Green Left) of the European Parliament. İnat also argues that  in Germany, the leader of the ultra-right populist party AfD (Alternative fur Deutschland), Frauke Petry also wanted to use the issue of Turkey as an instrument of pressure, just like the other ultra right parties. Petry shared his anti-Turkish ideas in articles published on the social media network Facebook.

Anyway, Turkey criticized the anti-Turkish rhetoric used by German and Austrian politicians ahead of fall elections in those countries in 2017. “We follow with regret the foundation of election campaigns of political leaders in Germany and Austria on an anti-Turkey basis and on preventing Turkey’s EU membership,” the Turkish Foreign Ministry said in a written statement. The statement added: “Turkey designates its own way and has a so rich belonging and future that it cannot be seen by the myopic point of view of the aforementioned countries’ politicians.” The statement also said that these politicians surrendering to a raw populism based in an anti-Turkish attitude instead of finding solutions to the political and economic challenges facing Europe endangers not only the continent but the entire world. “There is no doubt that this populist attitude will encourage the scourges of xenophobia, racism, and Islamophobia in Europe, where they are spreading,” said the statement.