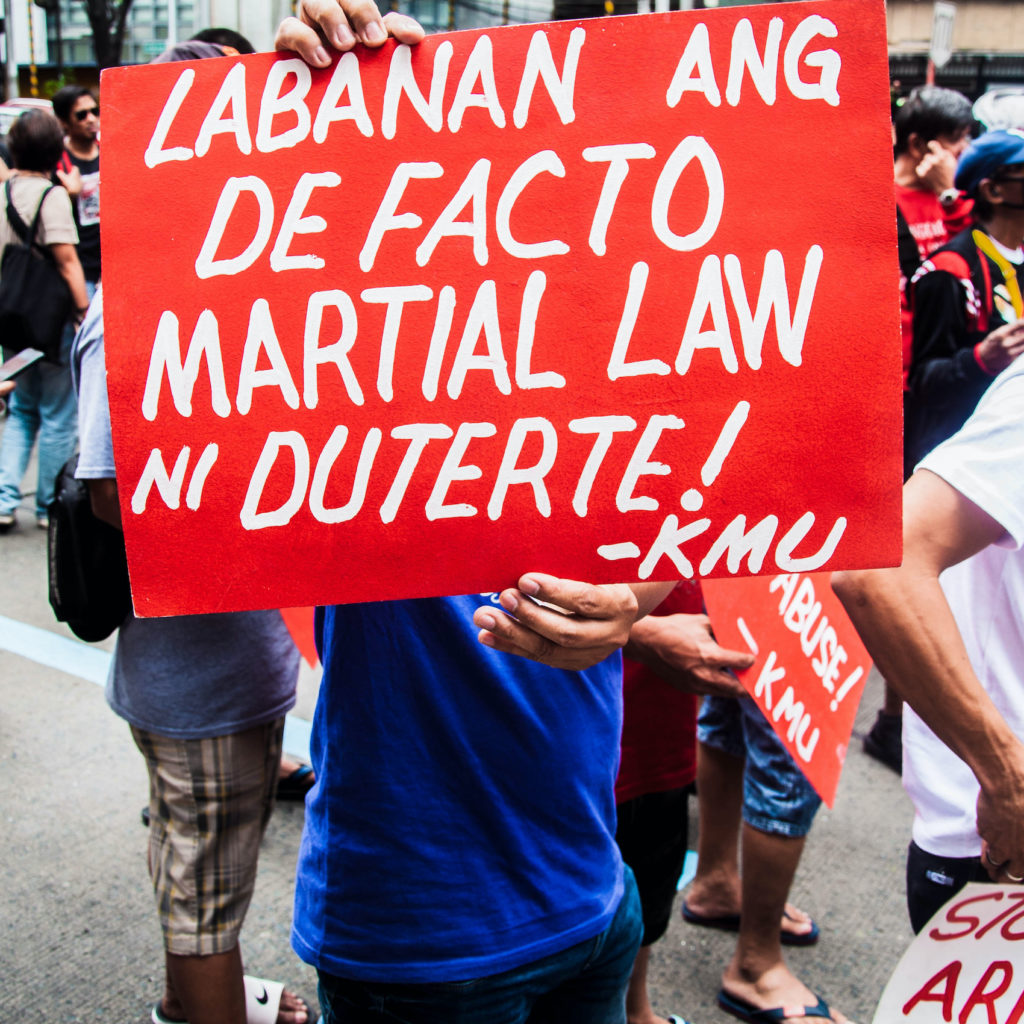 A man holding a placard with a call to fight Rodrigo Duterte's de facto Martial Law during the 34th Anniversary of EDSA People Power Revolution in Morayta, Metro Manila, Philippines. on February 25, 2020.

Penal populism is a process whereby the major political parties compete with each other to be “tough on crime”. It is generally associated with a public perception that crime is out of control and tends to manifest at general elections when politicians put forward hard-line policies which would remand more offenders into prison prior to sentencing and impose longer sentences. Penal populism generally reflects the disenchantment felt by a distinct segment of society — crime victims and their representatives — who believe they have been left out, or simply forgotten, by justice processes which focus on the offender.

In 1995 Sir Anthony Bottoms coined the term ‘populist punitiveness’ to describe one of the key influences which he saw at work on contemporary criminal justice and penal systems. It was intended to convey the notion of politicians tapping into and using for their own purposes, what Bottoms believed to be the public’s generally punitive stance towards anyone committing crime. The term changed to ‘penal populism’ when Julian V. Roberts of Oxford University stated that ‘penal populists allow the electoral advantage of a policy to take precedence over its penal effectiveness.”

In France, this concept was popularized by Denis Salas, judge and university fellow, who defines it as a “sympathetic discourse towards the victims”, which leads to a perversion of justice. Salas says that in France, penal populism has led to a plethora of new laws designed to achieve an unrealistic or utopian goal — a society where there is no risk. He says many new criminal statutes have been passed which can be traced to their impact on public opinion, rather than their actual effectiveness at reducing crime.

According to a book written by John Pratt, a criminologist and international authority on the subject, penal populism speaks to the way in which criminals and prisoners are thought to have been favored at the expense of crime victims in particular and the law-abiding public in general. It feeds on expressions of anger, disenchantment and disillusionment with the criminal justice establishment. It holds this responsible for what seems to have been the insidious inversion of commonsensical priorities: protecting the well-being and security of law- abiding ‘ordinary people’, punishing those whose crimes jeopardize this.

Pratt wrote that “as with populism itself, penal populism usually takes the form of ‘feelings and intuitions’ rather than some more quantifiable indicator: for example, expressions of everyday talk between citizens which revolves around concerns and anxieties about crime and disorder; anger and concern about these matters volubly expressed in the media — not simply the national press or broadcasters; and a variety of new information and media outlets which allow the voices of the general public a much more direct airing — local newspapers and news sheets, talk-back radio and reality television.” At the same time, while penal populism is clearly something more than public opinion per se, it is not averse to using evidence from such surveys to bolster the claims it makes. Pratt underlined also that penal populism feeds on division and dissent rather than consensus. “In these respects, it is as if a huge gulf now exists between the penal expectations of the public at large and the policies and practices of the criminal justice authorities,” he said.

Tess Bartlett emphasizes in an article that as a result of the concerns that media coverage of crime generated, crime control became increasingly central to political life. This politicization has opened penal policy up to fierce debate from both left- and right-wing politicians who have taken to using punitive law and order tactics in an attempt to gain support from the public. Prior to the 1980s, left­wing political parties mainly stayed away from punitive policies and instead chose to advance crime policy through welfare programs. In contrast, right­wing political parties were advocates of harsher criminal justice policies based around deterrence and individual responsibility.

According to Barlett, this politicization of crime control has also helped to transform victimhood. Up until the 1970s, the focus was on the offender, and victims remained largely excluded from debates around criminal justice. When victim issues were addressed, it was mainly from groups drawing attention to the need for victim compensation.

Nicole Curato asserts in an article that Philippine President Rodrigo Duterte’s penal populism are seemingly opposing, yet mutually reinforcing, logics of the politics of fear and the politics of hope. While the former gains currency from the vocabulary of fear, crisis and danger, the latter is animated by enactments of democratic agency among citizens who have been in the margins of politics for a long time. “These logics are in tension but also mutually reinforce each other. The politics of anxiety constricts the space of political discourse by invoking the tough language of war against drugs and criminality. It fuels what sociologists of deviance calls ‘penal populism’, a political style that builds on collective sentiments of fear and demands for punitive politics,” she says. Curato also argues that fear and anxiety are not the only driving forces for penal populism.

According to Curato, in Duterte’s case, the populist dichotomy is one between virtuous citizens versus hardened criminals — the scum of society who, for Duterte, are beyond redemption. Penal populism is a term that can capture this phenomenon. As stated above the concept has originally been used to describe political rhetoric that taps into the public’s punitive stance, penal populism results to harsher mechanisms for social control to address the public’s demand to be “tough on crime”. “This is held in contrast to ‘penal elitism’, which privileges the authority of experts and professionals in shaping the criminal justice system. While Duterte’s predecessor, Benigno S. Aquino, prioritized programs that fight crimes in a ‘deliberate, programmatic and sustained manner’, Duterte’s appeal lies in his promise to overcome the corrupt bureaucracy in the justice system and deliver peace and order in a swift and decisive manner,” writes Curato.

Curato states Duterte’s anti-drug crusade recognized the public’s latent anxiety and politicized a normalized issue. “The populist logic of painting a ‘dangerous other’ gained resonance among a public that already recognized the dangerous other but did not have the confidence to name and shame the enemy, out of fear or obligation to maintain community cohesion. Penal populism draws its discursive power from its capacity to attribute blame to both offenders and the political establishment that perpetuate shared anxieties. Duterte was able to render visible concerns that used to lurk in the background and was able to give a voice to a public that felt victimized by illegal drugs,” adds Curato.

Thus, according to Curato’s article, penal populism also creates a legacy of exclusion and divisiveness in liberal democracies. Although penal populism does give a voice to citizens’ frustrations, it also silences the perspective of ‘the dangerous other’ for they are considered enemies that should be eradicated. “The punitive foundations of the politics of fear limits the public’s imagination for measured and systematic responses to the drug problem. Instead, it promotes spectacular short-term solutions to complex problems at the expense of human rights,” underlines Curato.