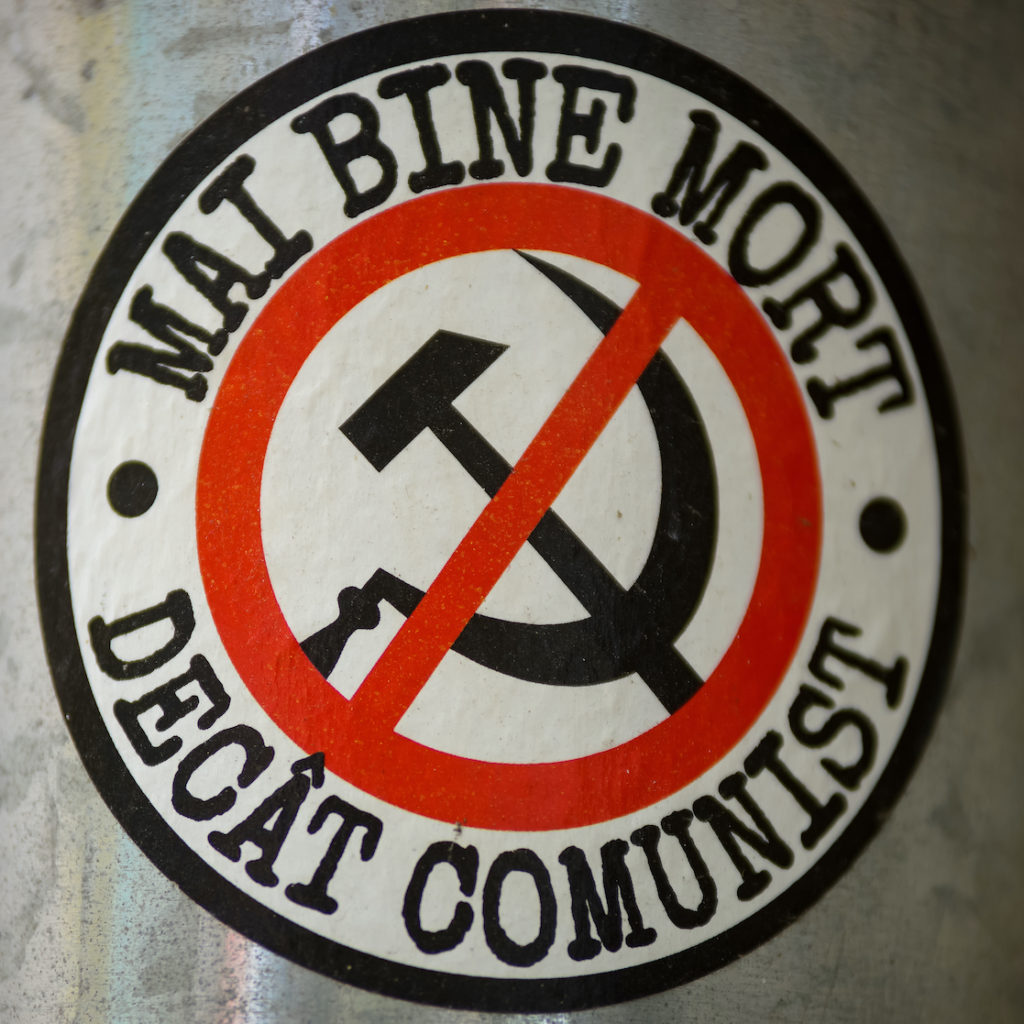 Message of fight against communism on a sticker that reads "better dead than communist" is pasted on the rainwater drain pipe of a building in downtown Bucharest, Romania on July 29, 2020.

Anti-communism is a political movement and ideology opposed to communism. It has been prominent in resistance movements against communism under socialist states governed by Marxist–Leninist communist parties throughout history. Organized anti-communism developed after the 1917 October Revolution in Russia and it reached global dimensions during the Cold War, when the US and the Soviet Union engaged in an intense rivalry. Anti-communism has been an element of movements which hold many different political positions, including conservatism, fascism, liberalism, nationalism and social democracy as well as anarchist or libertarian and even socialist and anti-Stalinist left viewpoints.

The first organization which was specifically dedicated to opposing communism was the Russian White movement which fought in the Russian Civil War starting in 1918 against the recently established Bolshevik government. The White movement was militarily supported by several allied foreign governments which represented the first instance of anti-communism as a government policy. Nevertheless, the Red Army defeated the White movement and the Soviet Union was created in 1922. During the existence of the Soviet Union, anti-communism became an important feature of many different political movements and governments across the world.

In the United States, anti-communism came to prominence with the First Red Scare of 1919–1920. During the 1920s and 1930s, opposition to communism in Europe was promoted by conservatives, fascists, liberals and social democrats. Fascist governments rose to prominence as major opponents of communism in the 1930s and they founded the Anti-Comintern Pact in 1936 as an anti-communist alliance. In Asia, the Empire of Japan and the Kuomintang (the Chinese Nationalist Party) were the leading anti-communist forces during this period.

During the Cold War years, the US played a leading role in supporting global anti-communism as part of its containment policy. NATO was founded as an anti-communist military alliance in 1949 and it continued throughout the Cold War. With the dissolution of the Soviet Union in 1991, most of the world’s Communist governments were overthrown and the Cold War ended. Nevertheless, anti-communism remains an important intellectual element of many contemporary political movements.

In 1950, fewer than 50,000 Americans out of a total US population of 150 million were members of the Communist Party. Yet in the late 1940s and early 1950s, American fears of internal communist subversion reached a nearly hysterical pitch. Government loyalty boards investigated millions of federal employees, asking what books and magazines they read, what unions and civic organizations they belonged to, and whether they went to church. Hundreds of screenwriters, actors, and directors were blacklisted because of their alleged political beliefs, while teachers, steelworkers, sailors, lawyers, and social workers lost their jobs for similar reasons. More than thirty-nine states required teachers and other public employees to take loyalty oaths. Meanwhile, some libraries pulled books that were considered too leftist from their shelves.

The postwar Red Scare is often called “McCarthyism,” a name derived from one of the era’s most notorious anti-communists, Senator Joseph McCarthy. Yet the anti-communist crusade of the late 1940s and 1950s extended both in time and scope well beyond the activities of the junior senator from Wisconsin. Its roots can be traced to the mid-nineteenth century. As far back as 1848, when Karl Marx published the Communist Manifesto, many Americans viewed communism as an alien ideology. The Bolshevik Revolution only added to such anxieties, fueling an earlier Red Scare in 1919.

The classic populist anti-communism emerged in the 1920s and was cemented in the 1930s. Originally focused on ‘foreign’ communists and marked by a strong dose of antisemitism, it would go on to become a central element of the political conflict. It adapted and adopted a form of bottom-up labor anticommunism, an anticommunism that emerged within the organized working class in Peru as a reaction to communist attempts in the early 1930s to co-opt labor.

The third variety of populist anti-communism, according to Drinot, emerges in the context of the Cold War. It is associated with the social-democratic forces that take shape in, and draw strength from, the atmosphere of progressive but anti-revolutionary change created by Kennedy’s Alliance for Progress. In contrast to the classic populist anti-communism, which targeted a small but threatening local communist party, in the 1950s the main communist threat was either external or not strictly speaking communist. The cold war populist anti-communism was less focused on the ‘worker’ as the agent of history, but it sought to contain not the revolutionary potential of workers but that of the indigenous peasantry.

On the other hand, Eastern Europe, which is clearly part of a global populist wave and is now part of the western right-wing populist imaginary as the bedrock for ‘pure’ European values, has populist governments that reject a ‘decadent’ and ‘imperialist’ West and merely continues a communist stance, despite their strident anti-communist rhetoric. According to an article by Bogdan Iacob, James Mark and Tobias Rupprecht, these populist governments’ fervent anti-communist rhetoric actually stands in continuity to some of the populist anti-Western traditions of pre-1989 state socialism. In fact, they continue to reject the idea of the end of communism as a liberal breakthrough. Rather, they promote the 1989 as the beginning of a long journey towards the recovery of a Christian anti-communist Europe. In this re-reading, the roles of later populist Prime Ministers – most notably Jarosław Kaczyński and Viktor Orbán – became the heroes of the show.

According to a book by Andrea L. P. Pirro, anti-communist profile of these parties should find consistent ideological sustenance in the supply of an anti-corruption agenda. Though these parties could be found as denouncing the evil perpetrated by the communist regime, anti-communism can also be interpreted as a battle fought at the policy level and targeting the old communist elites. Meanwhile, Emilia Zankina also writes in an article that with the fall of communist regimes across Eastern Europe, the main division within society was between anti-communists and supporters of the old regime. Prolonged economic hardship and political instability, however, rendered the anti-communist/communist divide less relevant, as voters were overcome by transition fatigue and disillusionment with the political elite. This created an opportune moment for populist parties which by definition exploit anti-elite and salvation rhetoric.