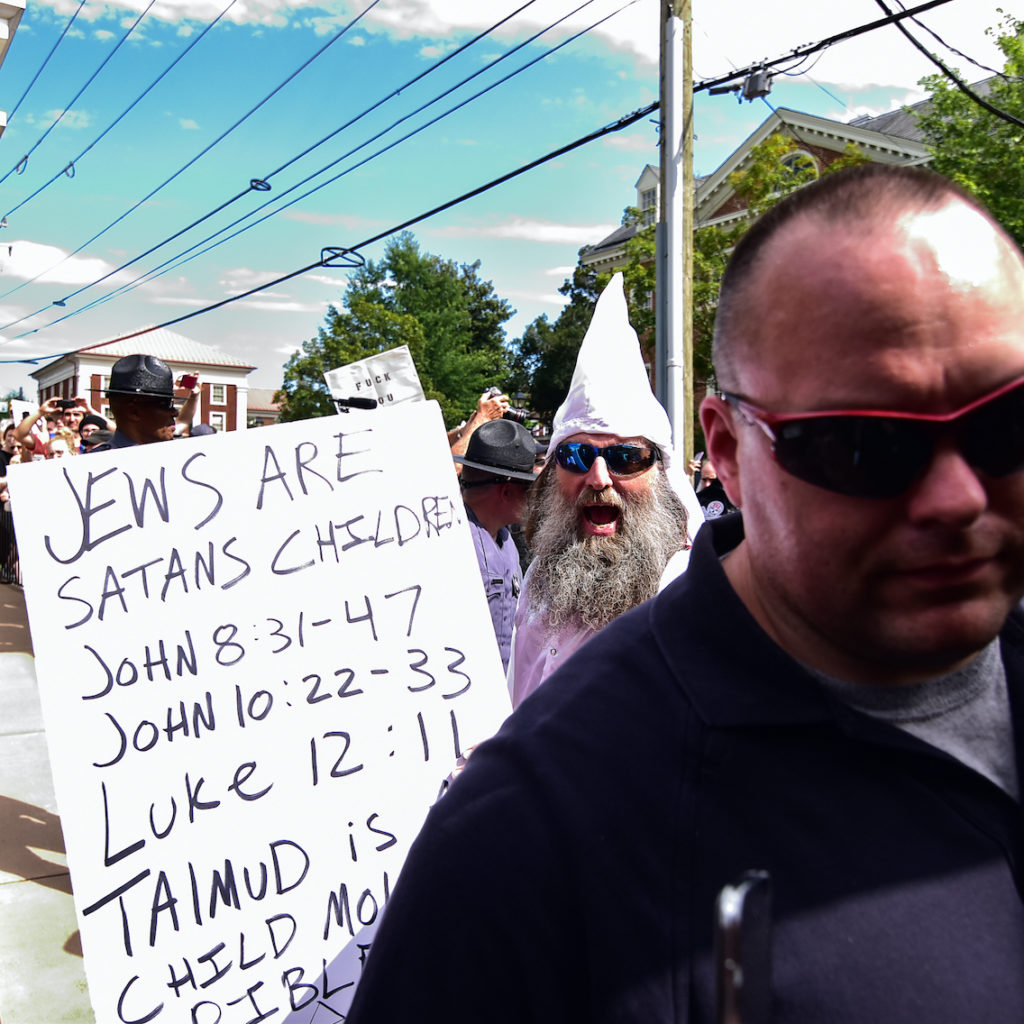 A KKK member holds antisemit sign during rally to support confederate statues in Charlottesville, Virginia, US on July 8, 2017.

The word antisemitism means prejudice against or hatred of Jews. The Holocaust, the state-sponsored persecution and murder of European Jews by Nazi Germany and its collaborators between 1933 and 1945, is history’s most extreme example of antisemitism.

Among the most common manifestations of antisemitism throughout history were pogroms, violent riots launched against Jews and frequently encouraged by government authorities. Pogroms were often incited by blood libels — false rumors that Jews used the blood of Christian children for ritual purposes.

In the modern era, antisemites added a political dimension to their ideology of hatred. In the last third of the nineteenth century, antisemitic political parties were formed in Germany, France, and Austria. Publications such as the Protocols of the Elders of Zion generated or provided support for fraudulent theories of an international Jewish conspiracy. A potent component of political antisemitism was nationalism, whose adherents often falsely denounced Jews as disloyal citizens.

Radical-right populism evolved differently in the US. While the United States lacks a fascist, antiregime tradition, it does have a long history of racist and antisemitic populism that has influenced the major political parties in different ways. Ben Macri wrote in an article that in the cultural climate of nineteenth century America antisemitism was an acceptable form of social prejudice. There has been a history of antisemitism in western society for centuries, and the US is no exception to that fact. The political uses of antisemitism had been well proven before and would be proven again in the 1896 presidential campaign. No political party was above using antisemitism, especially to appeal to Christian constituents, but it was the Populist Party who used antisemitism most distinctively.

Since the origins of the Populist movement in US in late 19th century, antisemitism had found its way into Populist doctrine. Many important Populist thinkers considered Jews to be at the root of problems for the farmers who made up the Populist party’s rank and file. Of course, not all Populists were antisemitic and some even attacked the party for its prejudice, but antisemitism was definitely a theme in populist ideology.

Populist movements widely harness the politics of resentment to the advancement of those who assume the right to speak for ‘the people’. Anybody in the way is treated as ‘enemy of the people’. Macri said “They build personality cults around leaders who act as empty ciphers into which every individual can pour their own dreams. The leaders offer us revenge against those who we can blame for our own feelings of inadequacy.”

David Hirsh wrote in an article that “politics in our time is about defending democracy against an arrayed series of related attacks that we might call ‘populist’. Each populism is at heart an irrational conspiracy fantasy. Each insists that democracy is fake and each populism blames some group of our fellow citizens for all our troubles, demonizing them as ‘enemy of the people’. It is not accidental that antisemitism is making a comeback as populism elbows its way back into mainstream politics.”

According to Hirsh, antisemitism was at the very center of Stalinist Communism and Nazism. These movements, by which people who felt powerless aspired to world domination, required a global, powerful and cunning ‘other’. Antisemitism is always projection. If you want to know what antisemites dream about, listen carefully to what they accuse Jews of doing.

“The antisemitic construction of ‘the Jew’ has been forged over centuries by a succession of distinct antisemitic movements, each adding to the narrative and emotional vocabulary of the other. It sits there in our culture and we think it is a thing of the past, too vulgar and awful to constitute a contemporary threat. But antisemitic ways of thinking are nevertheless entrenched in our subconscious and are tempting resources for anti-democratic movements because they give material shape to unendurable, abstract, fear and fury,” said Hirsh. He also claimed that “We cannot understand contemporary populism without understanding its relationship to antisemitism; but if we make that understanding explicit, then people will recoil against it and the message will be lost.”

Hating thy imaginary neighbor: an analysis of antisemitism in Slovakia.(Report) –Bustikova, Lenka; Guasti, Petra; Journal for the Study of Antisemitism, Dec, 2012, Vol.4(2), p.469(25).