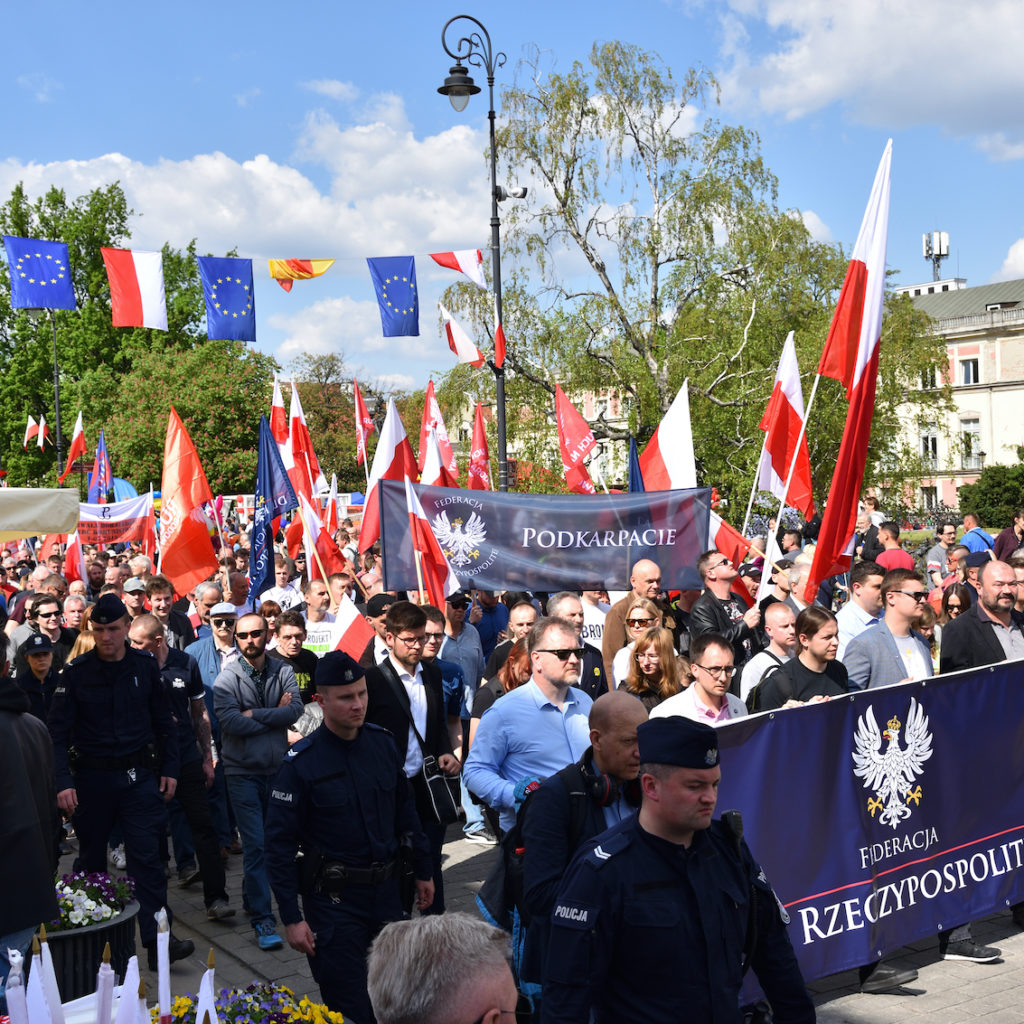 Anti-EU eurosceptic and Polish souverainists protest in Old town of Warsaw, Poland on May 01, 2019.

Souverainism is a doctrine which supports acquiring or preserving political independence of a nation or a region. It opposes federalism and supranational unions, leaning instead toward confederation or isolationism, and can be associated with certain independence movements. As a political doctrine, souverainism is supporting the political autonomy of a country in the exercise of its sovereignty. In France, this diffuse political current, represented as much on the left as on the right of the political chessboard, militates for a ‘Europe of the Nations’ so that each country sees its particularities and autonomy respected. Its defenders oppose European federalists, who advocate a federal Europe and aspire for a United States of Europe. Supporters of the doctrine regard themselves as Eurorealists opposed to the Eurofederalists and call for a confederal version of a European Union. Thus, souverainism is opposed to federalism and typically involves nationalism, particularly in France where the parties lean on it.

According to an article by Sonia Lucarelli, born as anti-European, the souverainist, populist, and illiberal forces have recently moved on to more “reformist” positions on the integration process: they aim to transform the Union by giving less weight to the supranational component and giving Member States their voices back. This change in direction, however, is not any less dangerous to the European Union than the previous, more openly anti-European, positions.

“Souverainist populism feeds on discontent with the negative effects of economic globalization, mistrust in the so-called ‘establishment’ (including the European one), and fear,” wrote Lucarelli and continued “What is now at risk, among other things, are intra-European solidarity (the essential binding agent of the Union), the very survival of liberal democracy in Europe, the preservation of the free movement of persons in the Schengen area, the focus on the respect of human rights in domestic and foreign politics (as evidenced by the outsourcing of the management of migrants to non-Member States), and the European support for the ratification of multilateral agreements (as recently shown by the refusal to sign the Global Compact for migration by several European countries).”

In the March 2018 elections, there was a massive growth of the Five Star Movement (5SM)—a web-based populist party that entered the Italian parliament in 2013 — and the League — the former Northern separatist party that turned into the Italian iteration of “Front National,” a nationalist political party in France, under the leadership of Matteo Salvini. Eventually, these two parties signed a “government contract” and in June 2018, they formed the first populist-souverainist government in one of the founding EU Member States, according to an article by Matteo Martone.

On the other hand, Fabio Coacci claims in a piece that European Union is facing hard times being split between Souverainists vis-a-vis Europeanists and being challenged by unprecedented issues as the migrant crisis and the institutional de-legitimation. Moreover, the spectre of the indecision of a consistent part of the European electorate which was hunting the European Parliament elections made the situation even more complex. “The proliferation of Eurosceptic and Souverainist political parties is under everyone’s eyes and their strengthening is jeopardizing the progress in the European integration achieved so far,” according to Coacci.

“The European Institutions are an easy target to blame for national issues which European Union may not be responsible for and, for this, they are becoming the favourite scapegoats for several political leaders and parties through Europe which may use it as a weapon of mass destruction,” says Coacci and adds that “In any case, it is a matter of fact that many European citizens perceive European Union and European Institutions, justifiably or not, as something too far from them and their local issues lacking a European sense of associative union and, accordingly, claiming the priority of national interests over the European ones.”