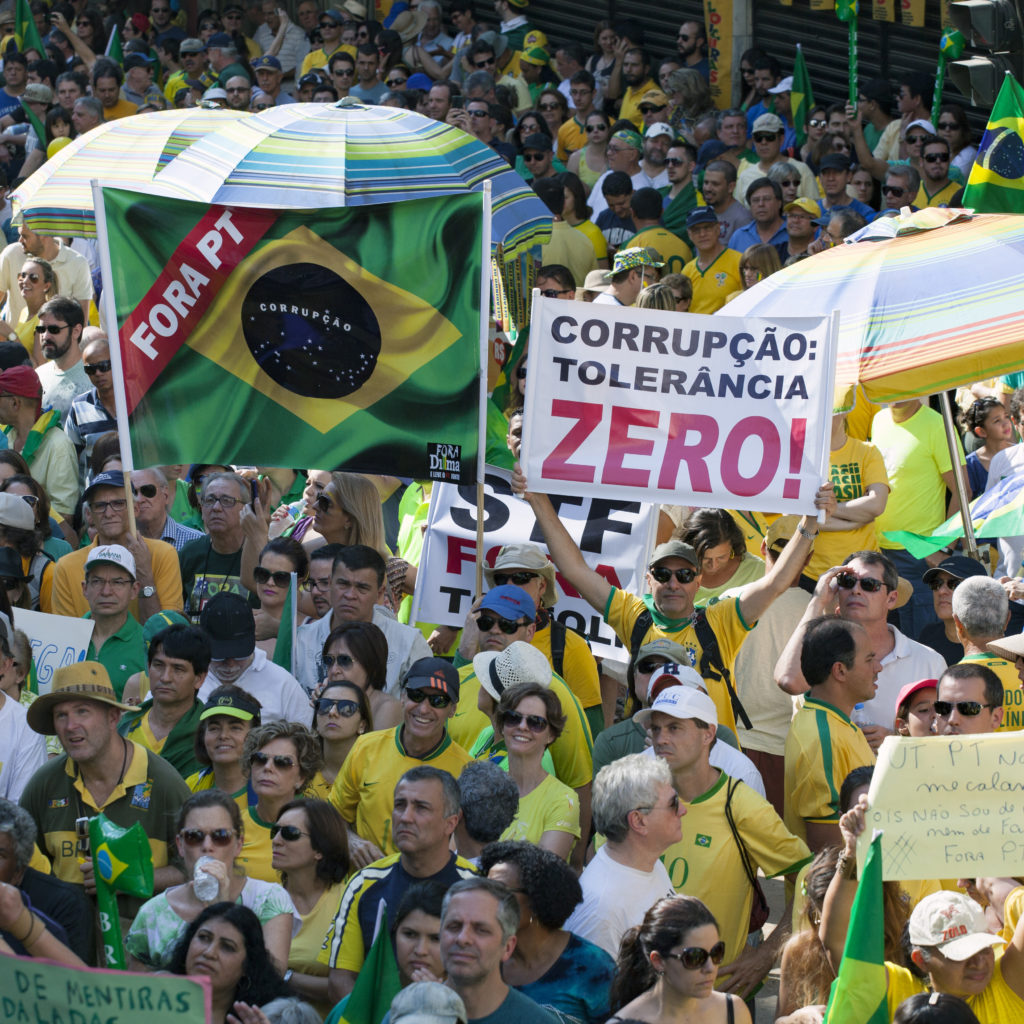 Anti-government protests in Brazil, asking for president Dilma Roussef's impeachment over corruption scandals on August 16, 2015. On the banners: zero tolerance against corruption.

Looking at countries around the world, one can see the importance of anti-corruption rhetoric in populist electoral campaigns, wrote Niklas Kossow in a report. Kossow stated that “corruption gives credence to the idea that political elites are just serving themselves and working against the people. This, in turn, strengthens the populist narrative and allows for populists to stylize themselves as the defenders of the people against the elites.”

The populist message of a corrupt elite responsible for a system that harms the people falls then on fertile ground when corruption is perceived to be a problem in the country, according to the report. “This makes it easier to sell the message that many elected politicians do indeed work against the best interests of the people. Moreover, since corruption is also strongly linked to social inequality, it is easy for populist leaders to fit that into their narrative of a divided world where the ‘pure people’ suffer at the hands of the ‘corrupt elite’. It is thus easy for populists to use corruption as a bridge to appeal to grievances caused by social inequality,” stated the report.

“What is questionable, however,” according to Kosslow, “is how effective populist leaders are in actually fighting corruption. Because, while anti-corruption promises serving to propel populists into office, these promises are often forgotten once these leaders get into power and that their divisive discourse then serves as a mantle to cover up their corrupt deals and sometimes even some new types of corruption.”

Fighting corruption is thus often advanced as a policy priority by populist or anti-establishment parties, according to the report which added that “There is strong evidence, however, that these parties by and large fail to counter corruption, and often even increase it.” By undermining democratic values and institutions after elected to the office they advance corruption and simply replace those political figures who reap the spoils of corrupt politics. And sometimes politicization of anti-corruption at the hands of populists has thus produced political instability.

As an example, according to an article by Alina Mungiu-Pippidi, in Romania today, as in Italy twenty years ago, the gradual politicization of anti-corruption has come to shape the political scene. Mungiu-Pippidi wrote in her article that when the EU asked Romania to establish an anti-corruption agency as a condition of EU accession (2004), the country responded by creating the National Anti-corruption Directorate (DNA). Yet three unforeseen problems derailed what might have become a virtuous circle, according to Mungiu-Pippidi: i) The distinction between the corrupt and noncorrupt political camps gradually evaporated. ii) The growing effectiveness of DNA made it an irresistible political weapon for those in power to use against their opponents. iii) President Traian Băsescu had the country’s National Defense Council declare corruption a security threat, which led to a massive increase in the number of wiretap warrants issued in corruption cases.

The politicization of anti-corruption has thus, according to the author, produced political instability and disillusioned voters. “Surveys in pre-EU accession years thus showed a mood of radical, anti-corruption-oriented populism, with voters identifying parties and Parliament as the most corrupt institutions,” she said.

According to Transparency International’s 2016 Corruption Perceptions Index (CPI), which paid a special attention to the global rise of populism in the West, while populist leaders and movements are on the rise in part in response to corruption, they will likely only exacerbate widespread corruption as it continues to seep into democratic institutions. “The track record of populist leaders in tackling this problem is dismal,” writes Finn Heinrich, research director of Transparency International in an article and adds that “They use the corruption-inequality message to drum up support but have no intention of tackling the problem seriously.”

This pattern applies globally. Both Turkey and Hungary have slipped in the corruption index since they elected populist strongmen, while Venezuela has remained at the bottom despite the elections of populist leaders Hugo Chavez years ago and now Nicolás Maduro. Politicians who run on anti-corruption platforms often foment corruption upon winning — and Trump may not be an exception. “In the case of Donald Trump, the first signs of such a betrayal of his promises are already there,” Heinrich writes and adds that “The talk is of rolling back key anti-corruption legislation and ignoring potential conflicts of interests that will exacerbate — not control — corruption.”