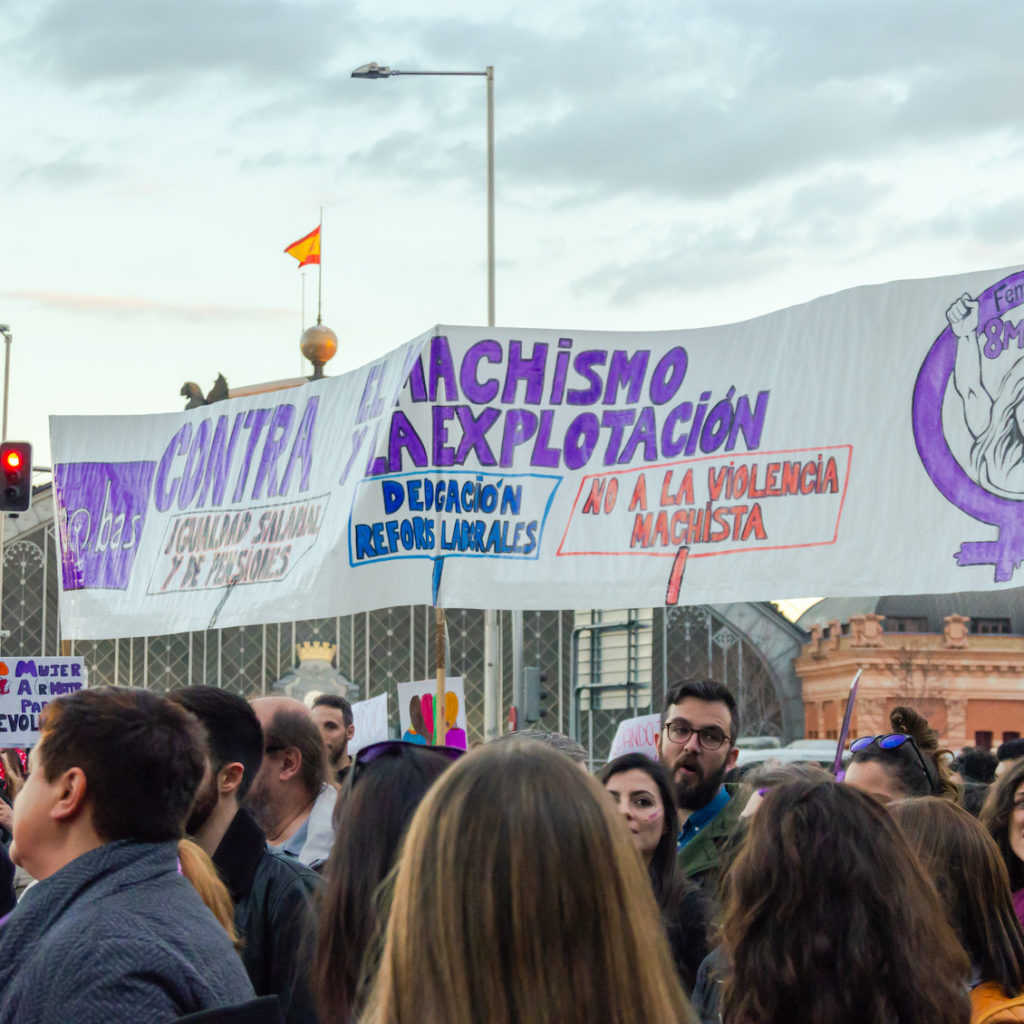 Feminist Strike on the Women Day of 2019 in the city center of Madrid, Spain. Feminist demonstration of women, 8M.

Feminism is the belief in social, economic, and political equality of the sexes, according to an article by Elinor Burkett and Laura Brunell. They wrote that “Although largely originating in the West, feminism is manifested worldwide and is represented by various institutions committed to activity on behalf of women’s rights and interests. Throughout most of Western history, women were confined to the domestic sphere, while public life was reserved for men. Even as late as the early 20th century, women could neither vote nor hold elective office in Europe and in most of the US.”

Feminism also incorporates the position that societies prioritize the male point of view, and that women are treated unfairly within those societies. Efforts to change that include fighting gender stereotypes and seeking to establish educational and professional opportunities for women that are equal to those for men. Feminist movements have campaigned and continue to campaign for women’s rights, including the right to vote, to hold public office, to work, to earn fair wages, equal pay and eliminate the gender pay gap, to own property, to receive education, to enter contracts, to have equal rights within marriage, and to have maternity leave.

Feminists have also worked to ensure access to legal abortions and social integration and to protect women and girls from rape, sexual harassment, and domestic violence. Changes in dress and acceptable physical activity have often been part of feminist movements. Some scholars consider feminist campaigns to be a main force behind major historical societal changes for women’s rights, particularly in the West, where they are near-universally credited with achieving women’s suffrage, gender-neutral language, reproductive rights for women and the right to enter into contracts and own property.

As Canadian sociologists Melissa Blais and Francis Dupuis-Déri write, on the other hand, that anti-feminist thought has primarily taken the form of an extreme version of masculinism, in which ‘men are in crisis because of the feminization of society’.

According to an article jointly written by Oriane Gilloz, Nima Hairy and Matilda Flemming anti-feminist populism is on the rise across large parts of Europe, although its face looks different in different places. “Some populists claim to be defenders of women’s and gay rights, while others are more explicitly anti-feminist with a top priority to crush ‘gender ideology’ and to reinstate traditional gender roles throughout society. The leaders of the the largest anti-feminist right-wing populist parties in France (Front National, FN), the Netherlands (Partij voor de Vrijheid, PVV) and Germany (Alternative für Deutschland, AFD) Marine Le Pen (FN), Geert Wilders (PVV) and Frauke Petry (AFD) are spearheading a joint European anti-European agenda in the aftermath of Brexit,” they wrote.

“Interestingly, two of the parties are led by women: FN’s Marine Le Pen and the AFD’s Frauke Petry,” said the authors and added that “Right-wing populist parties are traditionally supported by a large majority of men, but this might be changing. Marine Le Pen has managed to also attract women on a broad front, and in the recent Dutch elections, of the votes cast on PVV, 45 percent were cast by women. Frauke Petry has not had the same success: according to a poll in January 2017, 17 percent of male respondents would vote for AFD, while only 2 percent of women surveyed would do the same.”

Meanwhile, according to an article by Johanna Kantola and Emanuella Lombardo, the Finns Party are also more explicitly anti-feminist in their ideology, substantive proposals and women’s party institutions, opposing formal norms about positive actions and promoting conservative, family‐centered ideas of gender equality.

For instance, as the most explicitly anti-feminist party, AFD’s political focus points are the protection of the nuclear family and ending gender mainstreaming and to ‘terminate the promotion of gender research’. AFD wages war on gender mainstreaming, as it, according to them, undermines traditional gender roles and contributes to the sexualization of society. AFD and other parties share an Islamophobic view of Islam as the primary threat to women’s rights, and they also share an opposition to gender quotas – FN and AFD are explicitly opposed to all forms of gender quotas, and the PVV voted against a proposal on gender quotas on company boards in the Dutch Parliament.

Kantola and Emanuella Lombardo wrote that feminist research has been more attentive to the strengthening of radical right populism than the trajectory of left populism in Europe. “Feminist studies have shown how the discourse of radical right groups is visibly anti-feminist, anti‐LGBT, conservative, nationalist, racist, xenophobic, Islamophobic and antidemocratic,” they said and added that “The few gender issues that appear on the far‐right agenda, support traditional family and conservative gender roles, and oppose women’s sexual and reproductive rights and LGBT rights. Gender equality discourse is instrumentalized against immigration and feminist politics is framed as a dangerous ‘gender ideology’.”