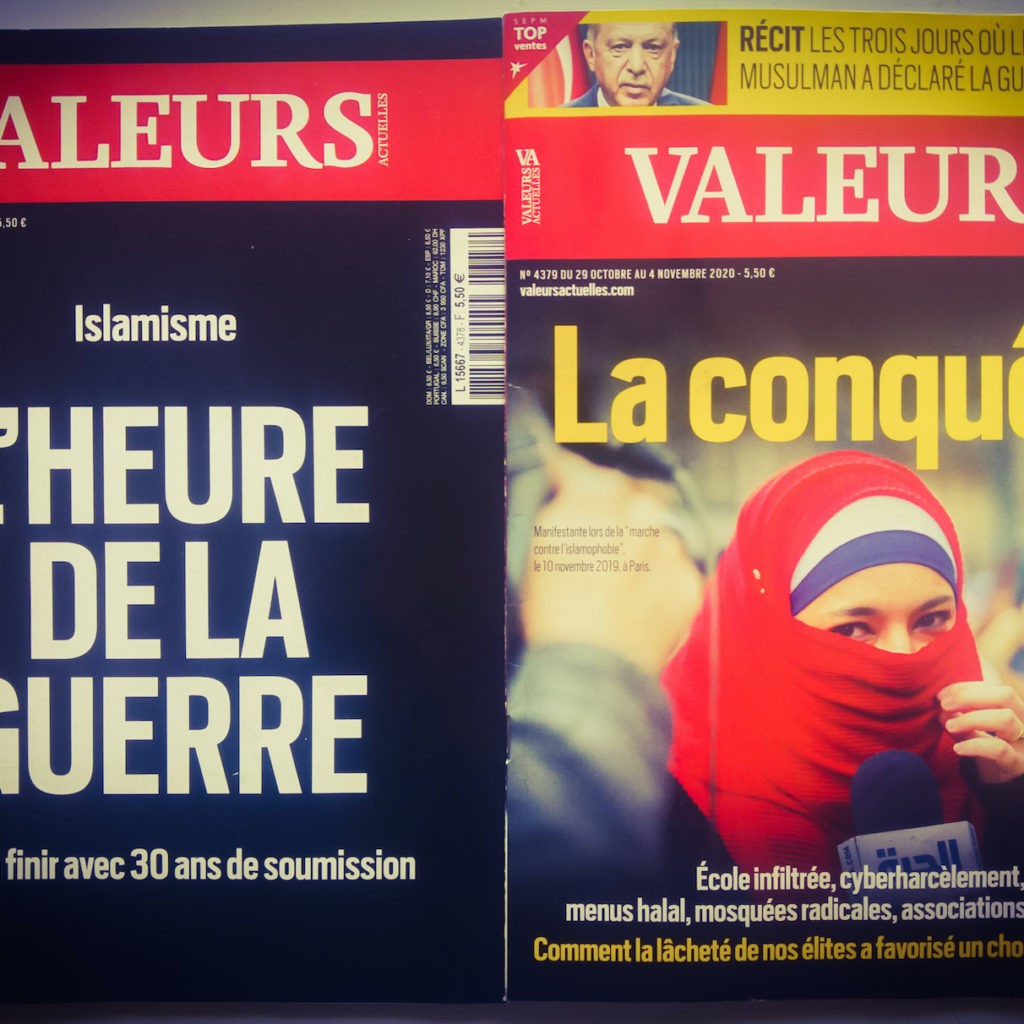 Front pages about Islam of the conservative French newspaper Valeurs Actuelles on Oct. 29, 2020, while France is hit by a wave of terror knife attacks and beheadings amid the jihadist threat.

The Clash of Civilizations is a thesis that people’s cultural and religious identities will be the primary source of conflict in the post-Cold War world. The American political scientist Samuel P. Huntington argued that future wars would be fought not between countries, but between cultures. It was proposed in a 1992 lecture at the American Enterprise Institute, which was then developed in a 1993 Foreign Affairs article titled ‘The Clash of Civilizations?’, in response to his former student Francis Fukuyama’s 1992 book, The End of History and the Last Man. Huntington later expanded his thesis in a 1996 book The Clash of Civilizations and the Remaking of World Order.

The phrase itself was earlier used by Albert Camus in 1946, by Girilal Jain in his analysis of the Ayodhya dispute in 1988, by Bernard Lewis in an article in the September 1990 issue of The Atlantic Monthly titled “The Roots of Muslim Rage”. Even earlier, the phrase appears in a 1926 book regarding the Middle East by Basil Mathews: Young Islam on Trek: A Study in the Clash of Civilizations. This expression derives from “clash of cultures”, already used during the colonial period and the Belle Époque.

Huntington began his thinking by surveying the diverse theories about the nature of global politics in the post-Cold War period. Some theorists and writers argued that human rights, liberal democracy, and the capitalist free market economy had become the only remaining ideological alternative for nations in the post-Cold War world. Specifically, Francis Fukuyama argued that the world had reached the ‘end of history’ in a Hegelian sense.

Huntington believed that while the age of ideology had ended, the world had only reverted to a normal state of affairs characterized by cultural conflict. In his thesis, he argued that the primary axis of conflict in the future will be along cultural lines. As an extension, he posits that the concept of different civilizations, as the highest rank of cultural identity, will become increasingly useful in analyzing the potential for conflict. At the end of his 1993 Foreign Affairs article, “The Clash of Civilizations?”, Huntington writes, “This is not to advocate the desirability of conflicts between civilizations. It is to set forth descriptive hypothesis as to what the future may be like.”

The Islamic civilization, Huntington wrote, is the most troublesome. People in the Arab world do not share the general suppositions of the Western world. Their primary attachment is to their religion, not to their nation-state. Their culture is inhospitable to certain liberal ideals, like pluralism, individualism and democracy.

According to an article by David Brooks, Huntington correctly foresaw that the Arab strongman regimes were fragile and were threatened by the masses of unemployed young men. “The Muslim world has bloody borders, he continued. There are wars and tensions where the Muslim world comes into conflict with other civilizations. Even if decrepit regimes fell, he suggested, there would still be a fundamental clash of civilizations between Islam and the West. The Western nations would do well to keep their distance from Muslim affairs. The more the two civilizations intermingle, the worse the tensions will be,” wrote Brooks.

According to an article by Azmi Bishara, the prevalent dogma in China and Russia sees the spread of democracy as an extension of western civilization, and therefore as a tool of western hegemony. In short, this means that, globally, the theory of the clash of civilizations is currently being adopted by these two major powers, particularly Russia. Bishara suggests that if Huntington were alive today, he might be shocked by my assertion that the clash of civilizations has become a Russian and Chinese doctrine of international relations.

Bishara also underlines that “If Huntington thought hard, however, he would find the idea logical. His theory on the clash of civilizations has been taken up in the US by the conservative nationalist right, which believes in power politics in international relations. It is precisely these forces that believe in this political credo who are ruling Russia today. They are right-wing conservative Russian nationalists. Much the same applies to China, although the economic policy model and the ambitions on the world level are different.”

Rogers Brubaker says in an article that civilizationist populism was first pioneered a decade and a half ago by the Dutch politician Pim Fortuyn. “Fortuyn was of course not the first to tap into popular anxieties about immigration or to blame immigrants for crime and urban disorder. But he innovated in joining anti-immigrant (and specifically anti-Muslim) rhetoric with liberal positions on social issues, especially gay rights. Proudly calling himself ‘the Samuel Huntington of Dutch politics,’ Fortuyn invoked the specter of a ‘clash of civilizations’ within Europe between what he referred to as ‘Judeo-Christian humanistic culture,’ which was liberal and open, and Islamic culture, which he characterized as backward and oppressive, especially in the domains of gender and sexuality,” underlines Brubaker.

According to Brubaker, in the face of this danger, it is important to insist—against the vulgarized Huntingtonian perspective adopted by the civilizational populists—that civilizations are not unified entities with timeless essences that stand irreconcilably opposed to one another. They are vast, varied, unruly, and evolving fields of practice and discourse. To posit a clash of civilizations is to neglect the more important clashes within civilizations.