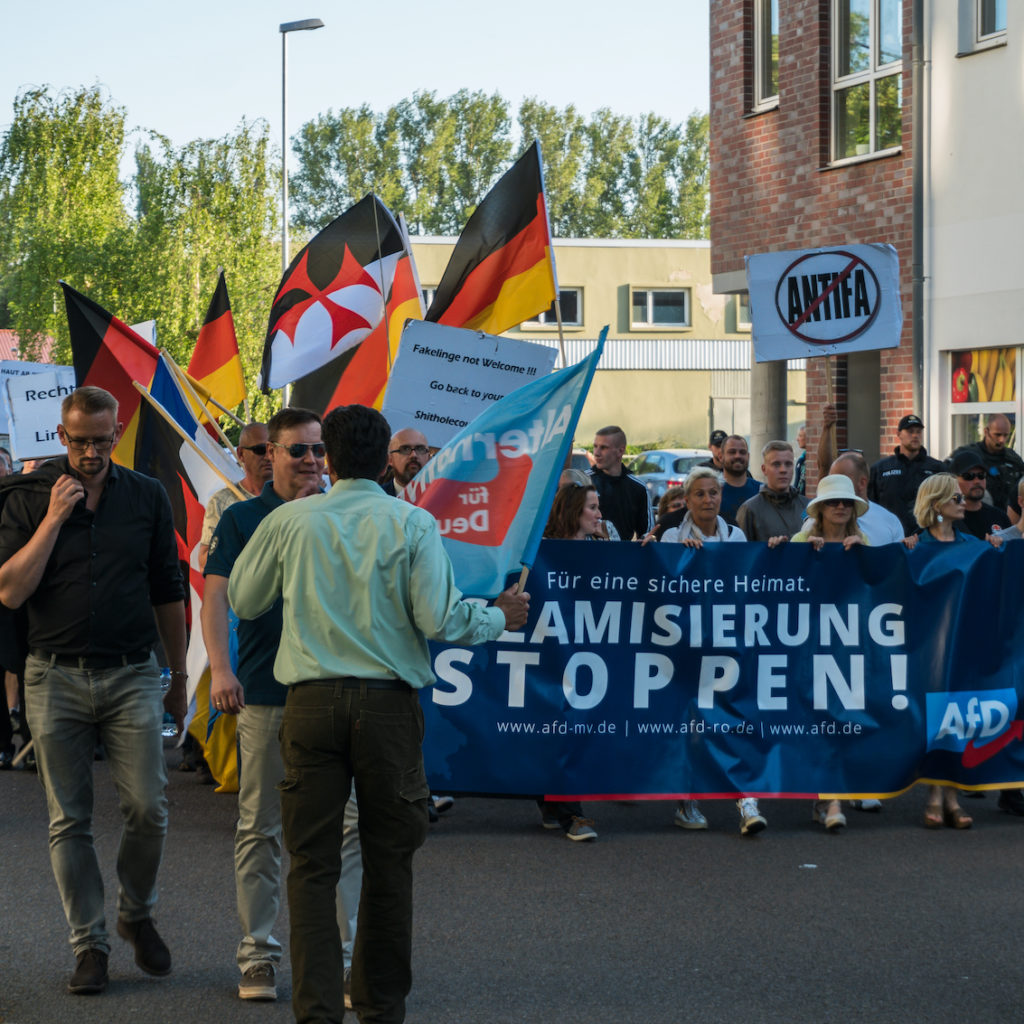 AfD demonstrated with slogan "Stop Islamization" in Rostock on May 14, 2018. AfD, Alternative for Germany, is a right wing political party in Germany.

Culture war is the cultural conflict between social groups and the struggle for dominance of their values, beliefs, and practices. It commonly refers to the hot button topics on which there is general societal disagreement and polarization in societal values is seen. The term is commonly used to describe contemporary politics in the US, with issues such as abortion, homosexuality, pornography, multiculturalism, and other cultural conflicts based on values, morality, and lifestyle being described as the major political cleavage.

According to a book by Irene Taviss Thomson, the term represents a loan translation from the German kulturkampf which refers to the clash between cultural and religious groups in the campaign from 1871 to 1878 under Chancellor Otto von Bismarck of the German Empire against the influence of the Roman Catholic Church. In one of the earliest and best-known portraits of the culture wars, James Davison Hunter (1991) described a fundamental split between orthodox and progressive views of morality and suggested that this divide cuts across class, religious, racial, ethnic, political, and sexual lines. In the eyes of one partisan, the culture war is apparent in the simultaneous emergence of ‘moral disarray’ and ‘moral revival’ symbolized by the success of both gangsta rap and gospel rock.

A year after Hunter put ‘culture wars’ on the social science map, Patrick Buchanan popularized the idea in his speech to the 1992 Republican National Convention. He told the audience in Houston that ‘a cultural war’ was taking place, a ‘struggle for the soul of America.’ The defining issues were abortion, homosexuality, school choice, and ‘radical feminism.’ In the aftermath of this address, the idea of a ‘culture war’ became a journalistic staple.

In today’s world, what unites populist movements on both the left and right is their rejection of elite culture and values. Despite the attempt to represent different movements labelled as populist as a distinct political form, they seem to have little in common other than their hostility to the ideals and the political practices of technocratic governance. However, more recently, there have been attempts to dig deeper, recognizing that these movements are not simply a hostile reaction to political institutions such as the EU or the decay of the old politics, but also to the cultural values of out-of-touch elites. Beyond electoral politics, some commentators are noting deeper fault lines in society, suggesting that populist revolts are symptomatic of a conflict over values and identity that is beginning to eclipse the traditional divide over economic redistribution that used to define left and right.

David Goodhart’s recent book, The Road to Somewhere: The Populist Revolt and the Future of Politics, describes two different groups increasingly pitted against each other. On one side are the marginalized ‘people from Somewhere’ – rooted in a specific place or community, socially conservative, often less educated, with a roots-based conception of national identity and cherishing ways of life that have been lost or are under threat. Those who could come from ‘Anywhere’ are more likely to subscribe to a cosmopolitan identity and are well-travelled, footloose, often urban, metropolitan, liberal, socially mobile and university-educated. In Goodhart’s view, populism expresses the rebellion by those ‘Somewhere’ social groups, whose ‘decent’ concerns have been ignored and routinely pushed aside by a media and political elite that has become a ‘cheerleader for restless change’.

On the other hand, in his book, Populism and the European Culture Wars, Frank Furedi explains that the hostility of the elites towards populism largely reflects the tension between values deemed acceptable by the political and cultural establishment and values that influence people’s everyday lives. In the wake of the exhaustion of the postwar political order, ideology and political principles have been displaced by expert-led, technocratic governance, that justifies itself on the basis of expertise and process rather than vision. For years, Furedi argues, these ‘experts’ have ridiculed ordinary people’s habits, customs and traditions, as if they had a right to dictate how people should lead their lives and behave towards each other. Consequently, many people, feeling patronized and demoralized about their capacity to conduct their everyday affairs in accordance with their own inclinations or belief systems, and are drawn towards movements that promise to take them more seriously.

Meanwhile, according to an article by Michael Grunwald, Trump has pioneered the politics of perpetual culture war, relentlessly rallying his supporters against kneeling black athletes, undocumented Latino immigrants and soft-on-crime, weak-on-the-border Democrats. He wrote: “Trump reverses the traditional relationship between politics and governance, weaponizing policy to mobilize his base rather than mobilizing his base to change policy. And in the Trump era, just about every policy issue is a wedge issue, not only traditional us-against-them social litmus tests like abortion, guns, feminism and affirmative action, or even just the president’s pet issues of immigration and trade, which he has wielded as cultural cudgels to portray Americans as victims of foreign exploiters.”

“These days, even climate change, infrastructure policy and other domestic issues normally associated with wonky panels at Washington think tanks have been repackaged into cultural-resentment fodder… Culture-war politics are often a crutch, a look-at-the-shiny-ball distraction, an easy way to shift complicated policy debates from inconvenient facts to emotion and identity,” Grunwald wrote.