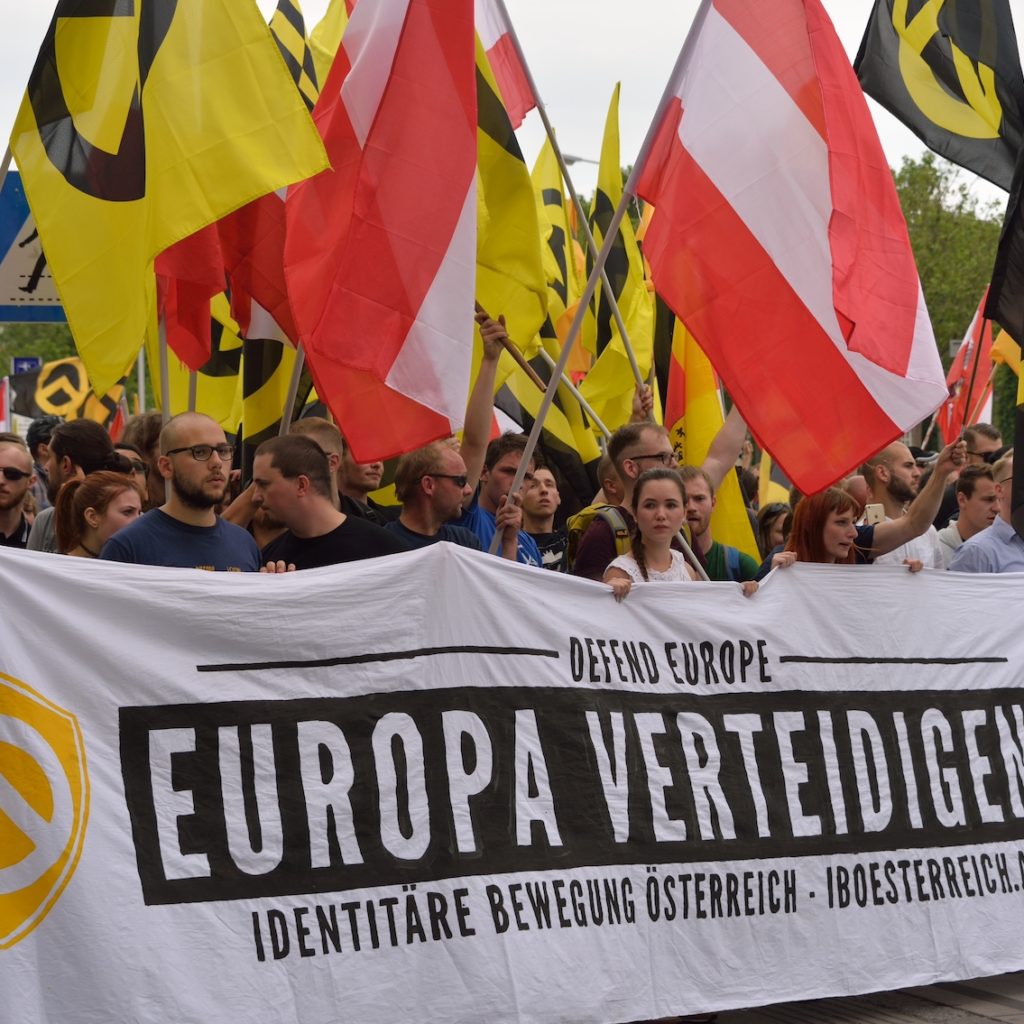 Demonstration of the Austrian Identitarian Movement organized a demonstration "to defend Europe in Vienna" on June 11, 2016.

The term of “Identitarians” originated in France with the founding of the Bloc Identitaire movement and its youth counterpart, Generation Identitaire. Identitarians espouse racism and intolerance under the guise of preserving the ethnic and cultural origins of their respective counties. American Identitarians such as Richard Spencer claim to want to preserve European-American (i.e., white) culture in the US. As Michael McGregor, a writer and editor for Radix wrote in an article in the publication, Identitarians want “the preservation of our identity–the cultural and genetic heritage that makes us who we are.”  Identitarians reject multiculturalism or pluralism in any form.

Namely, Identitarianism is a post-war European far-right political ideology asserting the right of peoples of European descent to culture and territory which are claimed to belong exclusively to people defined as European. Building on ontological ideas of modern German philosophy, its ideology was formulated from the 1960s onward by essayists such as Alain de Benoist, Dominique Venner, Guillaume Faye and Renaud Camus, considered the movement’s intellectual leaders.

While on occasion condemning racism and promoting ethnopluralist society, it argues that particular modes of being are customary to particular groups of people, mainly based on ideas of thinkers of the German Conservative Revolution, in some instances influenced by Nazi theories, through the guidance of European New Right leaders. Some Identitarians explicitly espouse ideas of xenophobia and racialism, but most limit their public statements to more docile language. Some among them promote the creation of white ethno-states, to the exclusion of migrants and non-white residents. The Identitarian Movement has been classified by the German Federal Office for the Protection of the Constitution in 2019 as right-wing extremist.

The movement is most notable in Europe, and although rooted in Western Europe, it has spread more rapidly to the eastern part of the continent through conscious efforts of the likes of Faye. It also has adherents among North American, Australian, and New Zealander white nationalists. The United States–based Southern Poverty Law Center considers many of these organizations to be hate groups.

The Identitarian lambda (ʌ) is a hate symbol used by individuals and groups who identify themselves with racist, anti-Muslim and anti-immigrant Identitarianism movement. Ancient Spartans displayed the letter (ʌ) on their shields at the Battle of Thermopylae in the 5th century B.C. White supremacists and other western chauvinists in the US and Europe place considerable symbolic significance on this ancient battle between the Greeks and Persians, which they view as the defense of Europe from an alien invasion from the Middle East.

According to an article by Vasiliki Tsagkroni, majority Identitarian populism focuses on the concept of identity as a tool for determining who belongs to what they see as the ‘majority group’, based on a number of characteristics, e.g., religion, or ethnicity creating a status where the ‘other’ stands against the ‘mass’. Taken thus, such populism cannot be what defines a particular individual or group as far-right or extreme right. To her, the ideological heterogeneity of far-right has created a continuing discussion about the definition and terminology of this political family.

Meanwhile, Albena Azmanova and Azar Dakwar wrote in an article that the pan‐European ‘Identitarian movement’ (IM), as an example of contemporary far‐right populism, defies the habitual matrix within which right‐wing radicalism has been criticized as a negation of liberal cosmopolitanism. To the authors, the IM’s political stance amalgamates features of cultural liberalism and racialist xenophobia into a defense of ‘European way of life.’ …Inclusionary ideals of cosmopolitan liberalism and democracy purporting humanistic post-nationalism have been transformed by Identitarians into elements of a privileged civilizational life‐style to be protected from ‘intruders.’

According to an article by philosopher John Gray, the European project of a transnational polity has created the Identitarian movement today. “Most clearly articulated in Italy, where it occupies a political space opened up by Matteo Salvini’s Liga, Identitarianism claims to represent groups that are being marginalized by the EU. Some Identitarians deny being nationalists, arguing that the nation-states constructed in the 19th and 20th centuries repressed local and regional cultures,” he wrote.

To Gray, Identitarian movements have, actually, close links with far-right national governments and parties and their ideas are echoed by Victor Orban in Hungary, the Austrian Freedom Party, AfD in Germany and Vox in Spain. “Identitarianism is a pan-European movement, with outreach in many countries (including Australia and New Zealand) facilitated through the internet. It has succeeded in attracting significant support among young people — ‘Generation Identity’, as they call themselves,” he said.

Gray wrote that “in practice, Identitarianism is principally a movement hostile to Muslim immigrants. Beguiled by the French sociologist Renaud Camus’s fantasy of a “great replacement” in which native Europeans are being “colonized” by a new population of non-Europeans, Identitarian groups aim to reassert Europe’s Christian heritage, including traditional forms of marriage. All have undercurrents of anti-Semitism.” To him, movements like this are not unfamiliar in post-war Europe. The far Right did not disappear along with Nazism and Fascism but carried on in a variety of guises in Italy, France, Germany and other countries. “What needs to be explained is why these forces have extended their political reach over the past decade, and now find expression in Identitarianism,” underlined Gray.