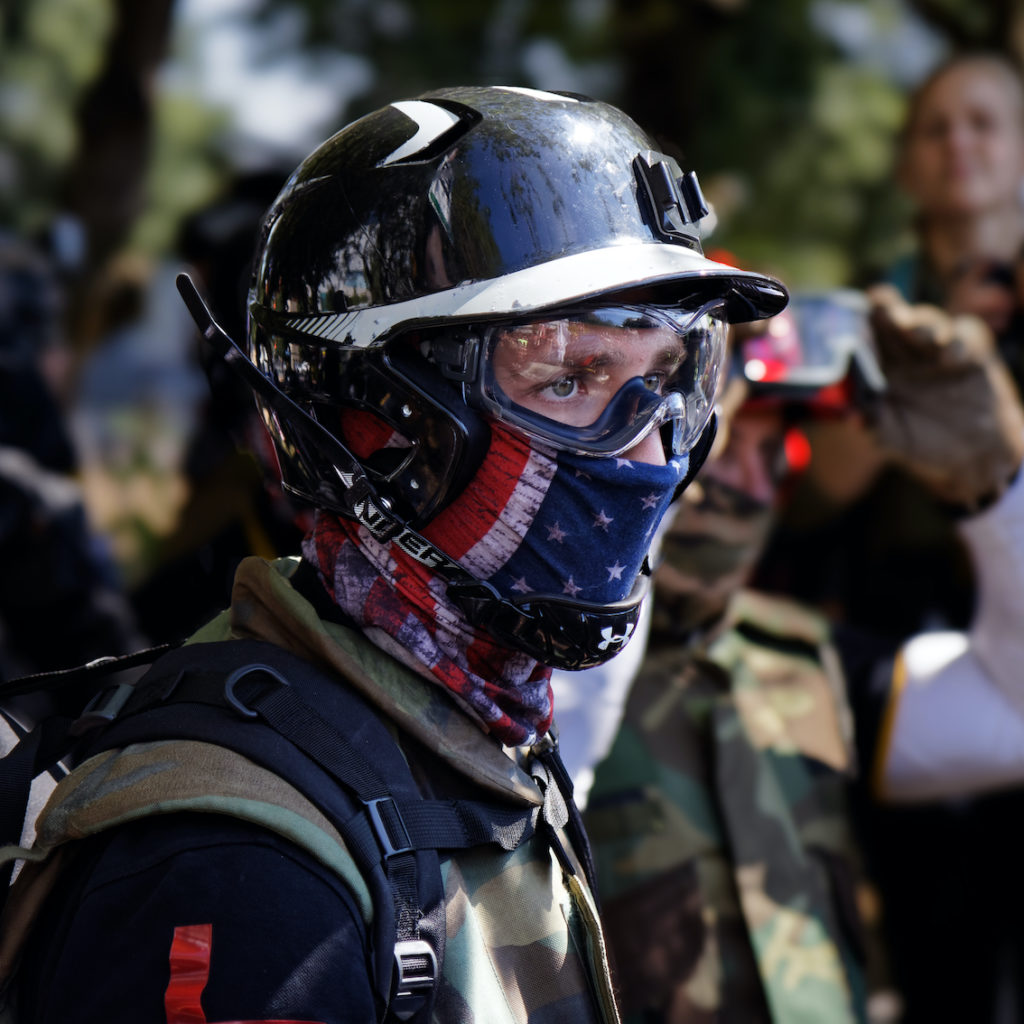 Proud Boys and Alt Right protesters at a Patriot Prayer rally in Portland Oregon, US on August 4, 2018.

Alt-right is a right-wing, primarily online political movement or grouping based in the US whose members reject mainstream conservative politics and espouse extremist beliefs and policies typically centered on ideas of white nationalism. As an abbreviation of ‘alternative right’, the alt-right is a loosely connected far-right, white nationalist movement based in the United States. As mentioned, as a largely online phenomenon, the alt-right originated in the US during the 2010s, although it has since established a presence in various other countries.

According to Webster Dictionary, Dylan Matthews defines alt-right as a label that blends together straight-up white supremacists, nationalists who think conservatives have sold out to globalization, and nativists who fear immigration will spur civil disarray. Meanwhile, Benjamin Welton explains the term as rather than concede the moral high ground to the left, the alt right turns the left’s moralism on its head and makes it a badge of honor to be called ‘racist,’ ‘homophobic,’ and ‘sexist.’ Moreover, according to Jonathon Morgan, alt-right is a sprawling coalition of reactionary conservatives who have lobbied to make the US more ‘traditional,’ more ‘populist’ and ‘more white’. Peter Beinart also portraits alt-right as as proponents of white nationalism.

Anyway, the term is ill-defined, having been used in different ways by various self-described “alt-rightists”, media commentators, and academics. Groups which have been identified as alt-right also espouse white supremacism, white separatism, severe immigration restrictions, and antisemitism.

According to an article by Anti-Defamation League (ADL), alt-right adherents identify with a range of different ideologies that put white identity at their centers. Many of them claim themselves as ‘Identitarians.’ Others in the alt-right identify as so-called radical traditionalists, people who want to preserve what they claim are traditional Christian values but from a uniquely white supremacist perspective. For example, the Traditionalist Youth Network is a group that espouses a white supremacist form of Christianity and promotes ‘family and folk’ and separation of the races.

The article explains that some in the alt-right identify as white nationalists, who want to preserve the white majority in the US, claiming that whites losing their majority status is equivalent to ‘white genocide.’  They favor propaganda on subjects such as immigration and ‘black crime’ as ‘evidence’ of this ostensible ethnic cleansing of whites. Everyone under the alt-right umbrella shares a fixation on white identity. Different segments of the alt-right may refer to themselves as neo-reactionaries (those who reject liberal democracy and ideas associated with the Enlightenment. Some neo-reactionaries refer to their theories as the ‘Dark Enlightenment.’)  Others may call themselves ‘race realists’ or alternately ‘HBD’ advocates, a reference to human biodiversity (those who believe that one’s race governs traits such as behavior and intelligence—with non-whites being inferior to whites).

Alt-righters reject egalitarianism, democracy, universalism and multiculturalism. A number of alt-righters are also blatantly Islamophobic, antisemitic and blame Jews for allegedly promoting anti-white policies such as immigration and diversity. According to ADL’s CEO Jonathan Greenblatt, the alt-right is an extremely loose movement, made up of different strands of people connected to white supremacy.

Greenblatt wrote that “one body of adherents is the ostensibly ‘intellectual’ racists who create many of the doctrines and principles of the white supremacist movement. They seek to attract young educated whites to the movement by highlighting the achievements and alleged intellectual and cultural superiority of whites. They run a number of small white supremacist enterprises that include think-tanks, online publications and publishing houses. These include Radix and Washington Summit Publishers, both run by Richard Spencer; Counter Currents Publishing, run by Greg Johnson; American Renaissance, run by Jared Taylor; and The Right Stuff, a political and social blog with a number of contributors.”