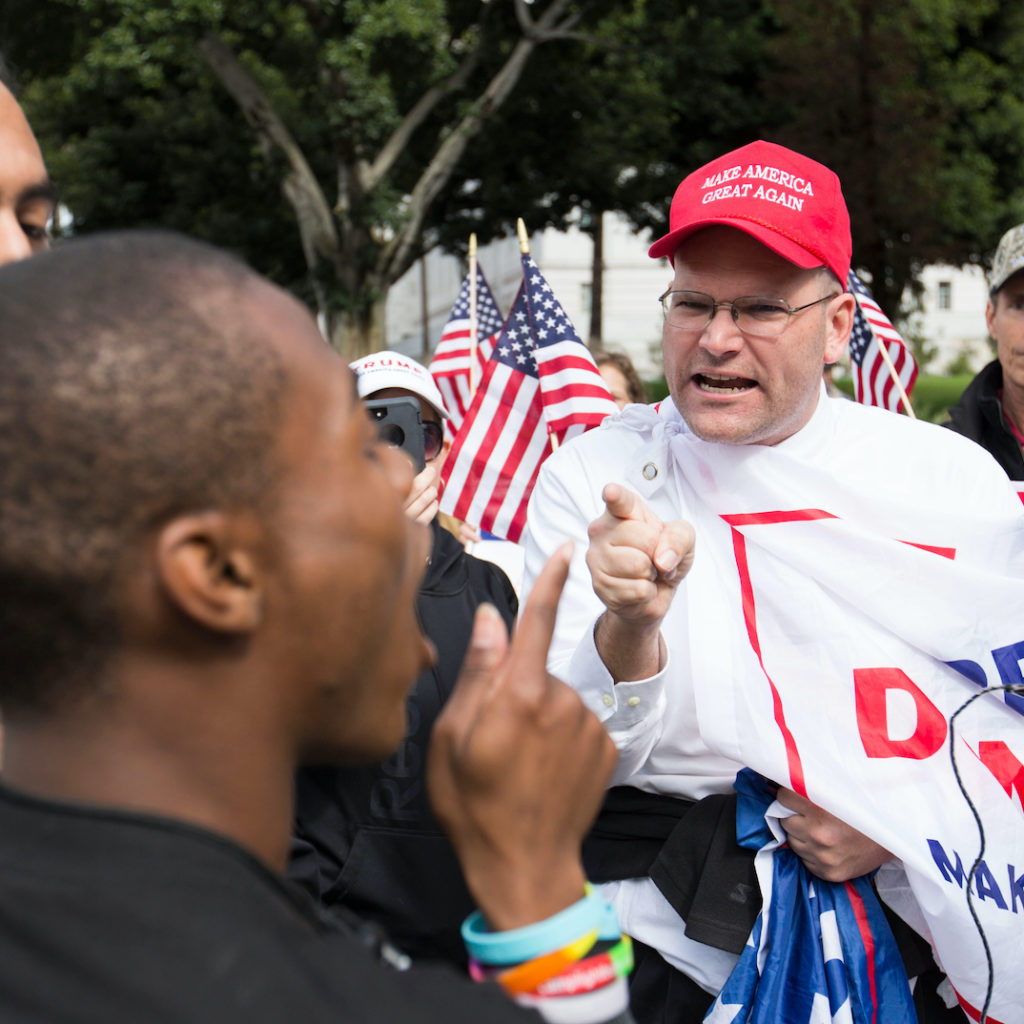 A White Trump supporter and and a young African American man argue during an immigration protest in Los Angeles, California / USA on January 18, 2017.

White Genocide is a term coined by white supremacists for propaganda purposes as shorthand for one of the most deeply held modern white supremacist convictions: that the white race is ‘dying’ due to growing non-white populations and ‘forced assimilation,’ all of which are deliberately engineered and controlled by a Jewish conspiracy to destroy the white race. This same conviction can be seen in the most popular white supremacist slogan around the globe: “We must secure the existence of our people and a future for white children.” White supremacists commonly claim that they must take action, even violent action, or the ‘white race’ will ‘perish from the Earth.’

In a sense, the idea of a White Genocide (or white extinction scenario) refers to any of several doomsday scenarios describing Caucasians or some demographic group associated with white people (typically Westerners, Protestants, or Christians, with perceived ‘pure’ white ancestry) would be heading towards a demographic crisis, becoming a minority in some or all countries, possibly followed by extinction. The term was coined by racist ex-Reagan appointee to the Office of Personnel Management Bob Whitaker. Whitaker, unsurprisingly, also coined the strawman phrase, “Anti-racist is a code word for anti-white.” Every white nationalist believes in this be it Ku Klux Klan, neo-Nazi, white power skinheads, alt-right, Identitarian and others.

These scenarios are a kind of framing used to promote white supremacy or similar movements as self-defense, by describing non-whites, mixed-whites, non-Christians, and/or non-Westerners (notably Arabs, Hispanics, and black people, depending on context) as the aggressors in a clash of races or civilizations. When it comes to Arabs or Muslims, claims about white extinction might be associated with the Eurabia scenario. These scenarios can draw a parallel with genocides that have really happened, such as the Holocaust. A similar canard focuses on the perceived decline in specific genetic traits associated with white people, such as blue eyes or blonde hair, rather than the ‘white race’ itself. Some variants of the white genocide scenario are the South African genocide conspiracy in South Africa and ‘The Great Replacement’ in France and Europe.

French author and far-right activist Renaud Camus coined the phrase “le grand remplacement” in a 2011 book to argue that Muslim immigration to France was a form of genocide against the country’s native population that required drastic action in response. According to an article by Simon Clark, this concept is not new. It echoes the ideas of early 20th-century American eugenicists Madison Grant and Lothrop Stoddard, whose work F. Scott Fitzgerald lampooned in The Great Gatsby. The packaging is different, but the fresh language makes Camus’ ideas particularly dangerous.

However, prior to recent years, the Great Replacement theory was seldom seen in the US context, according to an article by Rosa Schwartzburg. “What instead proliferated was a conspiracy theory known as the White Genocide theory, tracing back to the Jim Crow era and the political influence of eugenics. While the Great Replacement theory hinges on a fear of being overtaken by outsiders, the White Genocide theory rests on a fear of violence from the oppressed peoples within the nation itself — specifically, those who are or were enslaved,” she says.

Schwartzburg explains White Genocide theory as the belief that black people within the US will inevitably rise up and begin a race war within the country, resulting in the genocide of white people. Much like the Great Replacement theory, the roots of the theory can be traced back to the earliest days of slavery in the Americas and the fear of slave rebellion. The term ‘White Genocide’ emerged in the early 1900s, in Jim Crow America. One of the earliest proponents of the theory was a eugenicist named Madison Grant, who published a book titled The Passing of the Great Race in 1916. The text proposed the need for ‘racial hygiene’ in the US, and the need to separate out ‘non-Nordic European’ immigrants from those hailing from Southern and ‘Alpine’ Europe.

Schwartzburg notes that the term next appears in White Power, the official newspaper of the American Nazi Party (called the National Socialist White People’s Party after 1966.) It was featured in an article which accused the feminist movement and the “birth control campaign” of curbing the reproduction rates of white people while not doing so in countries with primarily nonwhite populations, eventually leading to a future in which “whites will be outnumbered four to one.”

It was in 1978, the White Genocide theory in the US exploded in popularity, according to Schwartzburg. “Neo-Nazi William Luther Pierce, writing under the pen name Andrew Macdonald, self-published a racist novel called The Turner Diaries. The novel takes the form of the diaries of Earl Turner, a member of a white-supremacist army which attempts to create an Aryan revolution and overthrow the US government. The novel has been massively influential for violent white supremacists in the US; it was a favorite myth of both ‘The Order’ and the ‘Aryan Republican Army’ — two of the most significant US neo-Nazi groups… Since that time, the White Genocide theory has been prevalent in white-supremacist discourses in the US; one of its most influential proponents is white-supremacist leader David Lane, whose White Genocide Manifesto circulates widely in far-right communities. Countless mass killers in the United States in recent years have named the White Genocide conspiracy as a key motivator,” she wrote.

Several individuals, including Brenton Tarrant, Anders Breivik, and Patrick Crusius have explicitly cited the White Genocide conspiracy theory in order to justify their mass killing of people of color and non-Christians. According to an article by Bridge, subscribers to White Genocide conspiracy theory do not define whiteness as simply having pale skin, but people who fit a particular profile of Euro-American heritage and Christian identity. Jews and Muslims are excluded from ‘whiteness,’ regardless of their skin tone, and are persecuted as such. Muslim immigrants from countries such as Syria and Iraq are especially reviled by White Genocide believers.

The White Genocide conspiracy theory has also been rhetorically used among Afrikaners, who are white South Africans and descendants of Western European (particularly Dutch) colonizers who settled in the Eastern Cape beginning in the 17th century. In March 2018, representatives of AfriForum, a white nationalist Afrikaner group, claimed that white farmers were being murdered on an average of one murder every five days, and that police were not taking sufficient action.

Meanwhile, throughout the populist right the following narrative is readily identifiable in their general position: they argue that there is an implicit threat to European culture and identity, what Generation Identity refer to as ‘ethno-culture’, according to an article by Andrew Wilson. Their language is apocalyptic and there is a sustained discursive convergence between apocalyptic beliefs and conspiracy theories. This convergence is evident in far-right ideologies, he says. According to Wilson, the mechanism by which Lane’s perceived conspiracy is to achieve its ends is the same as the current far-right’s Islamaphobic conspiracy, he wrote in the 21st of his 88 Precepts, “Forced integration is deliberate and malicious genocide, particularly for a People like the White race”. These are fear-filled fantasies of racial ‘genocide’ and ‘suicide’.