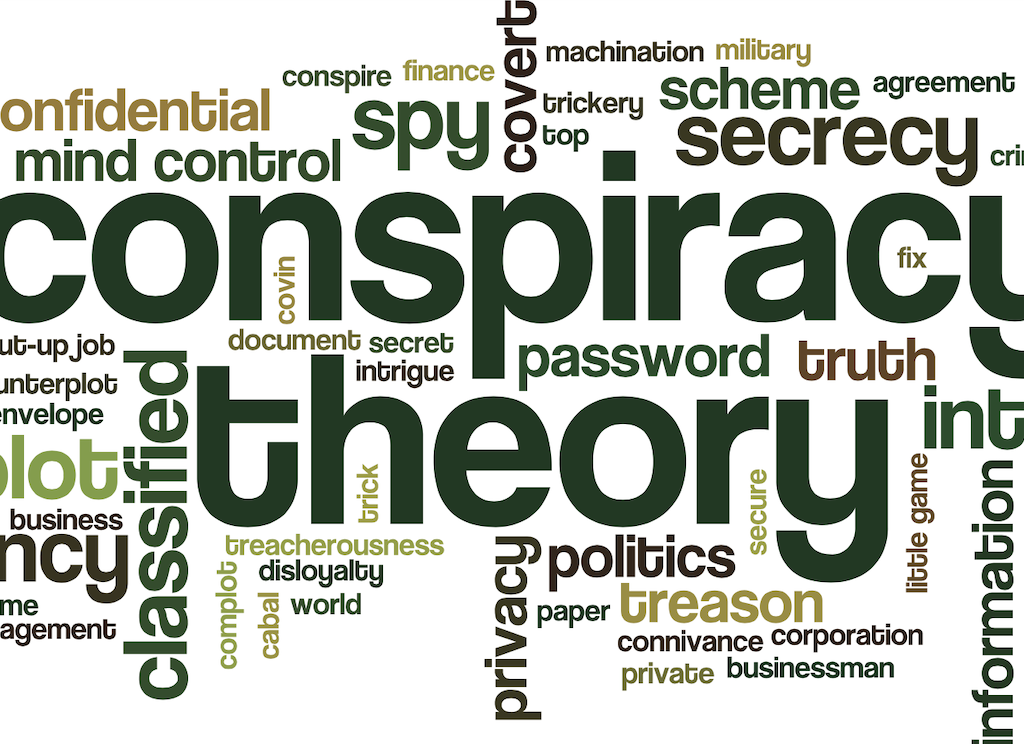 A conspiracy theory is an explanation of an event or situation that invokes a conspiracy by sinister and powerful actors, often political in motivation, when other explanations are more probable. The term has a pejorative connotation, implying that the appeal to a conspiracy is based on prejudice or insufficient evidence. Conspiracy theories resist falsification and are reinforced by circular reasoning: both evidence against the conspiracy and an absence of evidence for it are re-interpreted as evidence of its truth, whereby the conspiracy becomes a matter of faith rather than something that can be proved or disproved.

In his book, The Open Society and Its Enemies, the philosopher Karl Popper used the term ‘the conspiracy theory of society’ to denote a conception of social phenomena that he found to be defective — namely, that social phenomena such as “war, unemployment, poverty, shortages … [are] the result of direct design by some powerful individuals and groups.” Popper argued that totalitarianism was founded on ‘conspiracy theories’ which drew on imaginary plots driven by paranoid scenarios predicated on tribalism, chauvinism, or racism. Popper acknowledged that genuine conspiracies do exist but noted how infrequently conspirators have been able to achieve their goal.

The historian Bruce Cumings similarly rejects the notion that history is controlled by conspiracies, stating that where real conspiracies have appeared they have usually had little effect on history and have had unforeseen consequences for the conspirators. Cumings concludes that history is instead “moved by the broad forces and large structures of human collectivities”.

According to a landmark global survey conducted by YouGov-Cambridge Globalism Project, populists across the world are significantly more likely to believe in conspiracy theories about vaccinations, global warming and the 9/11 terrorist attacks. The survey found the clearest tendency among people with strongly held populist attitudes was a belief in conspiracy theories that were contradicted by science or factual evidence. To an article by the Guardian newspaper, the research may go some way towards understanding the success of rightwing populists such as Donald Trump and Jair Bolsonaro, who have fueled conspiracy theories, undermined efforts to address global warming and dismissed fact-based journalism as “fake news”.

In the YouGov survey, people with strongly held populist views were on average almost twice as likely to believe that supposed harmful effects of vaccines were being deliberately hidden from the public. They were similarly more likely to believe that the US government knowingly helped the 9/11 terrorist attackers, and that manmade global warming was a hoax. Two in five populists in the survey also agreed that regardless of who was officially in charge of governments, “there is a single group of people who secretly control events and rule the world together”, compared with just under a quarter of the overall survey respondents.

According to Eirikur Bergmann’s related book, which entangles the two tropes and maps how right-wing populists apply conspiracy theories to advance their politics and support for their parties, rapid rise of populist political parties around Europe and across the Atlantic in the early new millennium coincided with the simultaneous increased spread of conspiracy theories. Meanwhile, Deborah Wolf stated in a paper that the connection between conspiracy theory and populism is evident in recent political developments. To her, the narrative of “the common people” is used in an attempt to legitimize conspiracy theories and emphasizes the need to take action.

Alex Krasodomski-Jones wrote in an article that conspiracy theories are central to a wide variety of political forces that include neo-Nazis in Poland and Germany, anti-capitalist ‘black blocs’ and Islamic fundamentalists. Alongside these extreme examples, conspiracy themes are increasingly visible in mainstream political life: Donald Trump’s ‘deep state’; Bernie Sanders’ ‘one percent’; and in the UK a gamut of conspiracy theories around multiculturalism, immigration and the EU.

According to the article, both conspiracism and populism share a common engine: mistrust. There is, simply put, a lack of confidence in the institutions of politics, society and the media. At its most extreme, conspiracy thinking veers towards the ridiculous: there are people who believe the earth is at, that the moon landings were fake or that the world is run by reptiles. Much more common — and much more dangerous — are those whose politics is driven by mistrust, those who now flock to the alternatives offered by populist politics. The numbers are significant: researchers at Pew found that, in eight European countries, people with populist sentiments trust media outlets between 8 percent and 31 percent less than those with other political views. A 2017 study found a correlation between the rising unemployment, declining trust in the European Parliament, a rise in the fortunes of populist parties and, in the case of the UK, the likelihood of voting Leave in the Brexit referendum.

“When conspiracy thinking is combined with populist messaging, its power to infiltrate populations is immense,” wrote Krasodomski-Jones and added that “Because, both conspiracism and populism understand the world to be in permanent, dualistic conflict, with the evil forces that are currently in control on one side, and the people on the other. Both aim to awaken the public consciousness. Both emphasize the quest for truth and the need to tell the truth in the face of centrally coordinated lies and smears by the powerful, whether the political establishment; the mainstream media; the economic elite; or the abstract, shadowy cabals of Illuminati, Freemasons and others. These groups are not to be trusted. Not all populists are conspiracy theorists, and conspiracy theories do not always have a populist message. Nevertheless, the thematic alignment between the two worldviews is unmistakable.”

Bruno Castanho Silva, Federico Vegetti and Levente Littvay. “The Elite Is Up to Something: Exploring the Relation Between Populism and Belief in Conspiracy Theories.” 2017 Swiss Political Science Review, 23(4), 423–443.

Hameleers, M. (2020). They Are Selling Themselves Out to the Enemy! The Content and Effects of Populist Conspiracy Theories. International Journal of Public Opinion Research, 1-19.