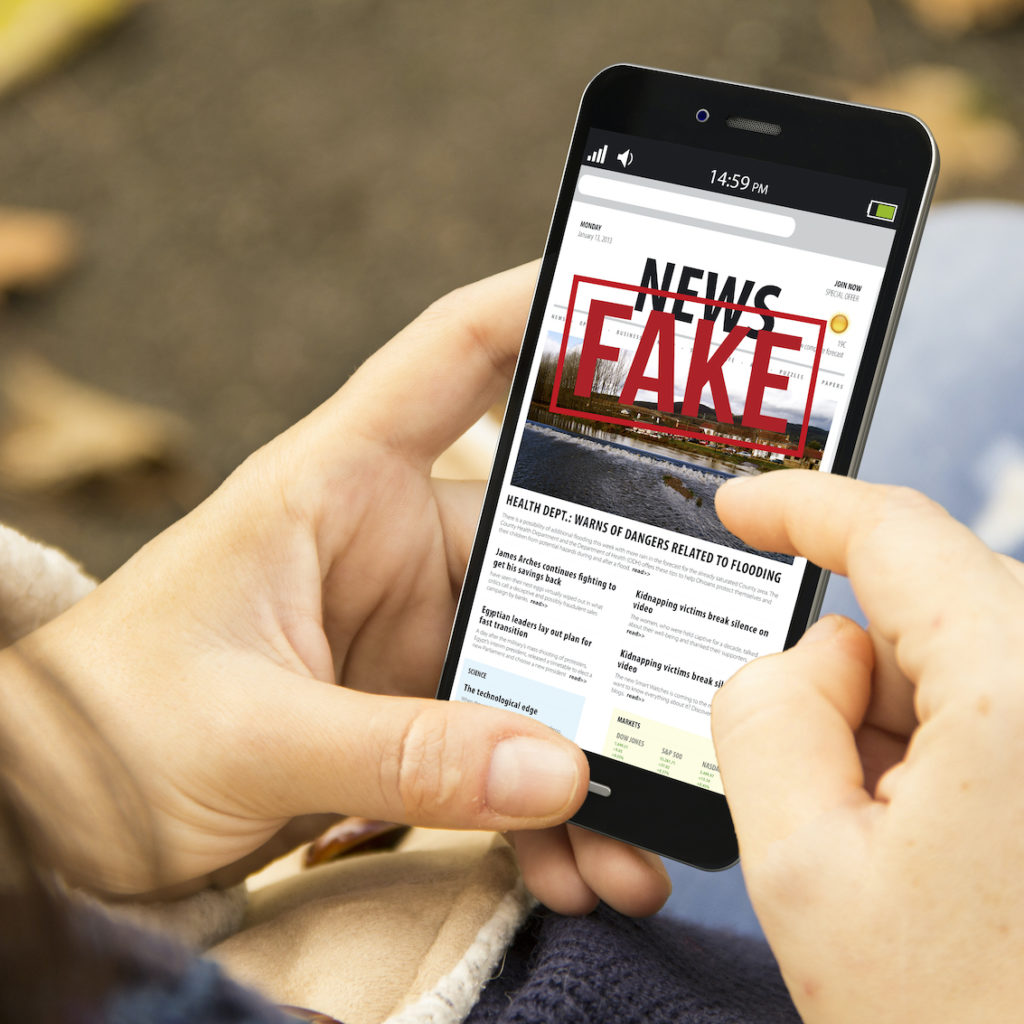 Fake news (also known as junk news, pseudo-news, or hoax news) is a form of news consisting of deliberate disinformation or hoaxes spread via traditional news media or online social media. Digital news has brought back and increased the usage of fake news, or yellow journalism. The news is then often reverberated as misinformation in social media but occasionally finds its way to the mainstream media as well.

Fake news is written and published usually with the intent to mislead in order to damage an agency, entity, or person, and/or gain financially or politically, often using sensationalist, dishonest, or outright fabricated headlines to increase readership. Similarly, clickbait stories and headlines earn advertising revenue from this activity.

The relevance of fake news has increased in post-truth politics. For media outlets, the ability to attract viewers to their websites is necessary to generate online advertising revenue. Easy access to online advertisement revenue, increased political polarization and the popularity of social media, primarily the Facebook News Feed, have all been implicated in the spread of fake news, which competes with legitimate news stories. Hostile government actors have also been implicated in generating and propagating fake news, particularly during elections.

Fake news undermines serious media coverage and makes it more difficult for journalists to cover significant news stories. An analysis by BuzzFeed found that the top 20 fake news stories about the 2016 US presidential election received more engagement on Facebook than the top 20 election stories from 19 major media outlets.

The term “lying press” is at times used to cast doubt upon legitimate news from an opposing political standpoint. During and after his presidential campaign and election, Donald Trump popularized the term “fake news” in this sense, regardless of the truthfulness of the news, when he used it to describe the negative press coverage of himself. In part, as a result of Trump’s misuse, the term has come under increasing criticism, and in October 2018 the British government decided that it will no longer use the term because it is “a poorly-defined and misleading term that conflates a variety of false information, from genuine error through to foreign interference in democratic processes.”

According to Greg Nielsen, fake news and populist movements that appear to hold the fate of democracy hostage are urgent concerns around the world. “The flight from liberal democracy toward oligarchy has spread out from the unexpected results of the 2016 American presidential elections bringing in a wave of reactionary populism and the beginning of a left populist counter movement. The phenomenon of fake news is often explained in terms of opposition public relations strategies and geopolitics that shift audiences toward a regime of post-truth where emotion is said to triumphs over reason, computational propaganda over common sense, or sheer power over knowledge,” wrote Nielsen.

Like Nielsen, numbers of pundits assessed that ‘fake news’ has undeniably been biased in favor of populist or anti-establishment parties. As politically charged misinformation has been proliferating online, it is no wonder that many have been questioning whether the spread of fake news has affected the results of recent elections, contributing to the growth of populist party platforms.

According to an article by Michele Cantarella and Nicolò Fraccaroli, in the US, Trump voters were more likely to be exposed and believe to misinformation. In the Italian context, these findings have been replicated in a recent report from the financial newspaper Il Sole 24 Ore,1 where the likelihood of believing and sharing so-called fake news was found to be higher for voters of the populist MoVimento 5 Stelle and Lega than for voters of other parties. In Italy, not only does the consumption of fake news appear to be linked with populism, but the content of the overwhelming majority of pieces of misinformation also displays an obvious anti-establishment bias. On the other hand, the Reuters Digital News Report in 2018 showed that Turkey ranks first on the list of countries where people complain about completely made-up stories. The study researched how fake news is helping facilitate the rise of populism in Turkey.

“Populist politicians generally consider fake news as a valuable propaganda tool for their political interests,” wrote Harun Güney Akgül in an article and added that “There is plenty of fake news aired by pro-government media. Therefore, the Turkish government is emerging as a suspect behind the fake news cycle. The fact is that most of the fake news is published for the benefit of the government. Research shows that, paradoxically, President Recep Tayyip Erdogan is regarded as one of the most important populist politicians in the world. These two different indicators can be valuable data in revealing the relationship between fake news and populist politicians.”

To Akgül, today “pool media” has become a term that symbolizes media that publishes broadcast pro-government stories. Pool media is crucial for making fake news because it is produced by the government. After that, this news is served to the pool media and most of the time and all newspaper use the same headline and text. Bots use this fake news for the next step. Bots are the accounts that are controlled en masse from a central point. According to Kerem Sözeri, this generally works with this way in Turkey; so instead of equal participation in the social media, “they amplify their owner’s agenda.”

“According to various sources, the AKP has established troll troops, nearly six thousand. Finally, the fake news spreads to a broad mass of society as if they are reliable news. Fake news is used in a lot of different ways by the Turkish government. The government sometimes organizes protests to oppose social movements by producing misinformation. Turkish government is creating fake stories or misinformation with the help of social media accounts. It was discovered that lots of pro-Erdogan websites were producing fabricated news. Bosphorus Global is just an important one of such pro-Erdogan websites,” wrote Akgül.

To Akgül’s article, with the new populist wave in Europe and America, people have started talking about fake news and populism as one entity. For example, “Le Monde, one of the leading French newspapers, identified and corrected 19 lies made by Marine Le Pen, the extreme-right candidate who reached the runoff of the 2017 French presidential election, during her televised debate against Emmanuel Macron”. Akgül underlined the fact that fake news is produced without ethical elements, although there was a code of ethics in media. “Principles of journalism are to ensure that citizens have access to the right information and are protected against fake news. There are hundreds of codes of conduct, charters, and statements made by media and professional groups outlining the principles, values, and obligations of the craft of journalism,” he wrote.

Akgül wrote populist leaders caused polarization by playing with social values. Otherwise, polarization is very important for using fake news… They tend to create an autocratic structure with false accusations against democracy. The decline of democratic values following victories of the populist leaders, e.g. Brexit campaigners, Trump’s controversial election victory and the rise of Jair Bolsonaro is a crucial power behind the populist movement…

“Since the inception of social media, many populist governments have learned how to control the new public sphere and its digital ecology. Perhaps, misinformation is one of the best tools for them within social media. Brexit and Trump’s controversial election victory were a significant triumph for populist politicians… Trump and his election victory is an important example of fake news and populism. Following the 2016 election, according to a database, 115 pro-Trump fake stories were shared on Facebook a total of 30 million times and 41 pro-Clinton fake-stories have been shared a total of 7.6 million times,” said Akgül.

On the other hand, right-wing populists, according to an article by Michael Hameleers, are not only attributing blame to the political elites, but increasingly vent anti-media sentiments in which the mainstream press is scapegoated for not representing the people. To his article, in an era of post-truth relativism, ‘fake news’ is increasingly politicized and used as a label to delegitimize political opponents or the press. To better understand the affinity between disinformation and populism, Hameleers conceptualizes two relationships between these concepts: i) blame attributions to the dishonest media as part of the corrupt elites that mislead the people; and ii) the expression of populist boundaries in a people-centric, anti-expert, and evidence-free way.

The results of a comparative qualitative content analysis conducted by Hameleers in the US and Netherlands indicate that the political leaders Donald Trump and Geert Wilders blame legacy media in populist ways by regarding them as part of the corrupt and lying establishment. He said that “Compared to left-wing populist and mainstream politicians, these politicians are the most central players in the discursive construction of populist disinformation. Both politicians bypassed empirical evidence and expert knowledge whilst prioritizing the people’s truth and common sense at the center stage of honesty and reality. These expressions resonated with public opinion on Facebook, although citizens were more likely to frame mis- and disinformation in terms of ideological cleavages. These findings have important implications for our understanding of the role of populist discourse in a post-factual era.”

We Are the People and You Are Fake News: A Social Identity Approach to Populist Citizens’ False Consensus and Hostile Media Perceptions — A Schulz, W Wirth, P Müller; Communication Research, 2018, 0093650218794854

Marco Deseriis, The Faker as Producer: The Politics of Fabrication and the Three Orders of the Fake; in Culture Jamming: Activism and the Art of Cultural Resistance, 2017.

Al-Rawi, A. and Groshek, J. (2018). “What the Fake? Assessing the Extent of Networked Political Spamming and Bots in the Propagation of #fakenews on Twitter.” Online Information Review. [ISI: 1.68.

Hameleers, M. (2020). My reality is more truthful than yours: Radical right-wing politicians’ and citizens’ construction of “fake” and “truthfulness” on social media— evidence from the United States and The Netherlands. International Journal of Communication : IJoC, 14, 1135-11152.