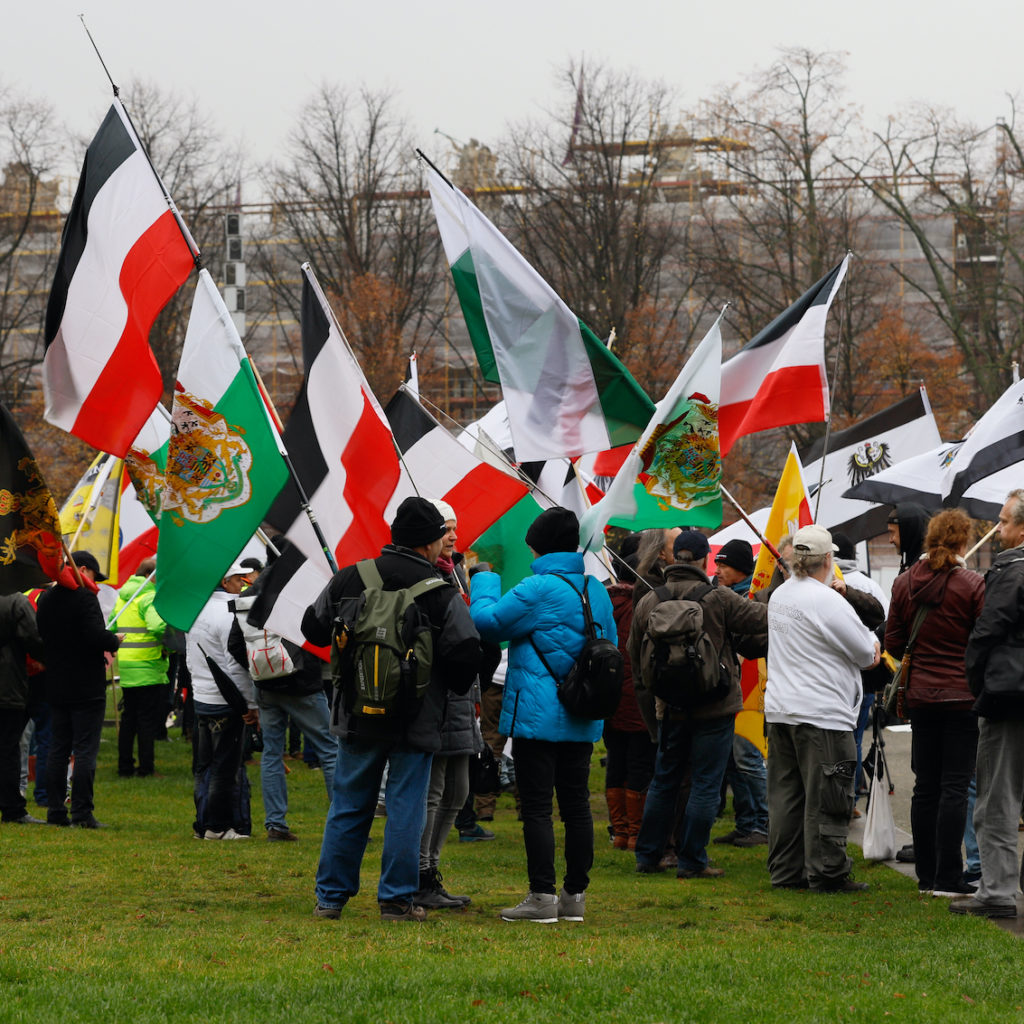 Members of the Reich Citizens' Movement organize a lift at the Lustgarten in the city of Berlin on November 9, 2019. They deny the existence of the Federal Republic of Germany.

A reactionary is a person who wants to reverse political changes and seeks to restore society to a state believed to have existed before. It is usually used pejoratively to describe a conservative opposed to modernity. Like much of the political language of left-wing and right-wing, the usage arose as a result of the French Revolution. Some authors have described them as reverse revolutionaries, for they also believe in radical change envisioning a utopia, except this utopia is to be found in the past.

In political science, a reactionary or reactionarist can be defined as a person or entity holding political views that favor a return to a previous political state of society that they believe possessed characteristics that are negatively absent from the contemporary status quo of a society. As an adjective, the word reactionary describes points of view and policies meant to restore a past status quo.

Meanwhile, reactionary populism describes extreme right-wing populism and is practically synonymous with the “radical right.” It is most associated with anti-immigration policies and extreme nationalism; Donald Trump’s campaign was a perfect example. This sort of parties has also very strong followings in many European nations today.

As Šefik Tatlić claims in an article that reactionary populism is a discourse that helps capitalism to reproduce itself as an ideologically potent system of power and to normalize its necropolitical matrix of organization of rule, Judith Butler defends opposite. According to her interview, there are forms of right-wing populism that we are seeing now that object to laws that were securing equality between men and women, laws against racism, laws that permit migration and even affirm an ethnically and religiously heterogeneous population. And that kind of reactionary populism wants to restore an earlier state of society, driven by nostalgia or a perceived loss of privilege. She said “They want to take down state power for the loss of their former world.”

In a joint article, Alfredo González-Ruibal, Pablo Alonso González and Felipe Criado-Boado wrote that by reactionary populism they understand a political form that is anti-liberal in terms of identity politics (multiculturalism, abortion, minority rights, religion, etc.) but ultimately liberal regarding economic policies. It is characterized by exacerbated nationalism, racism, xenophobia, the defense of male privilege, anti-elitism and anti-intellectualism.

Their critique comes from their specific experience as social scientists living in Spain, a country where post-truth regimes and reactionary populism have not been the exception but the norm throughout most of the twentieth century — as in many others that have been subjected to dictatorial regimes: from Russia to Portugal. According to them, the reactionary ideology of right-wing populism is based on a scapegoat culture predicated upon fear and hatred of ‘the Other’ and it preys on communities ravaged by economic crisis and social disarray. “So, liberal arguments, suffused with epistemic populism, does not provide people with the political or intellectual weapons necessary to face what is coming: the coalition of predatory capitalism and reactionary populism,” they underlined.

According to an article by Randy David, reactionary populism seeks to avenge “elite betrayal” through a leader, typically an outsider to the political establishment, who personifies — and not merely represents — the collective resentment of the downtrodden, the exploited, the oppressed and the forgotten. David writes “Unlike conventional politicians, the political outsiders who ascend to power via the route of reactionary populism are not subject to the same expectations and criteria by which the performance of elected officials is conventionally measured. None of them feels obliged to present a coherent program of government. Rather than viewed as a failing, their manifest disregard of the basic rules of modern governance is treated as a necessary counterpoint to the phlegmatic intellectualism of the modern politician.”

Tatlić underlines the fact that the modern reactionary populism draws its logics from racist and supremacist ideologies, fascism, which is treated as a “blue print” of its national-socialist iteration. He says “As long as the nationalist angle of American, or any other paradigmatic Western reactionary populism is concerned, it is not political nationalism in terms of a discourse that would advocate the interests of the state and all its citizens that is glorified by this populism, it is chauvinist, racist nationalism to which the exclusion of those defined as not belonging (to the racial core of the nation) is one of the main ideological cornerstones.”

Some excerpts from Tatlić’s article are as follows:

“Historical fascist discourse, as well as paradigmatic modern reactionary populism, is therefore naturocentric because this discourse, as it already has been mentioned in relation to the definition of the nation, interprets fictitious categories, such as race, ethnicity, nation and so on as something authentically true, tangible and subsequently ‘natural.’ Hence, citizens of Muslim origin are being treated by paradigmatic Western reactionary populists as a foreign body within the ‘tissue of the nation.’

“The emphasis put on a culture that is present in both historical fascism and contemporary reactionary populism is not just an act of monopolization of the definition of rationality/civilization/progress/democracy, but also an act of denial of these qualities to others, which additionally provides a grotesque aureole of suprapolitical purpose to reactionary discourses in general.

“European reactionary populism is, in a way, a form of explicit appliance of modernized First World’s racism that was ‘upgraded’ in wider post-WW2 era and that has, in accordance with the support of Israeli right-wing and Israel’s apartheid in general, ‘elevated’ the Jews on a racial scale in order to be able to denigrate Muslims as the new primary other.

“This also goes for an American version of Western reactionary populism, which is ardent in support of Israel on foreign policy level, while it on the domestic policy level conceptualizes white Christians of European decent as the main carrier of an epistemology of American ‘greatness,’ ‘exceptionalism’, ‘dream’ and so on. Hence, although American, and Western epistemological normative has, long time before the rise of reactionary populism, elevated the Jews on a racial scale, the Jews are still being treated as part of the register of others who are expected to confirm their modernist and democratic propensity to the ‘white core’ of capitalism, or more precisely, the First World in the capacity of epistemological and organizational logistics of capitalist modernity.

“It could be said that reactionary populism is intersectional because this discourse, on the basis of colonial and imperial epistemologies, combines neoliberalism, neoconservativism, racial logics and those elements of religious dogma that can be synchronized with the grand narrative of capitalist modernity. So, it could be observed that reactionary populism’s simplistic reductionism of the complexities of the world onto a level of (a conflict between and/or differentiation based on) race and ethnicity does not just divert and suppress class based social struggles, but that it actually continues the process of depoliticization of ideology, that was intiated by neoliberalism.

“Reactionary populism is a continuation of the system of power that produced and that perpetuates neoliberalism. It is not, in the majority of cases, a mere alt-right, but plain, yet modernized, racism with its fascist and supremacist iterations. Reactionary populism absolutely is not a ‘rogue’ discourse, it is not ‘anti-establishment’ movement, nor is it political ideology. It is a poor, unargumented excuse for an ideology which practically functions as a methodology that synchronizes neoliberal principles of organization of political economy with racial, atavistic and humanocentric epistemological logics that always stood behind or beneath neoliberalism.

“Reactionary populism reacts to the reduction of the people onto the level of the mass and/or the population, but it does it not in favor of society as a category that transcends the people, but in favor of the population comprised of ‘desirable’ races and/or ethnicities. It actually seeks to save capitalism through the means of empowerment and renewed enrichment of the white middle class, as well as it seeks to obscenely re-politicize and ideologically substantiate capitalism in general in order to reinvigorate it as the system potent enough to continue ‘pushing’ history ‘forward.’”