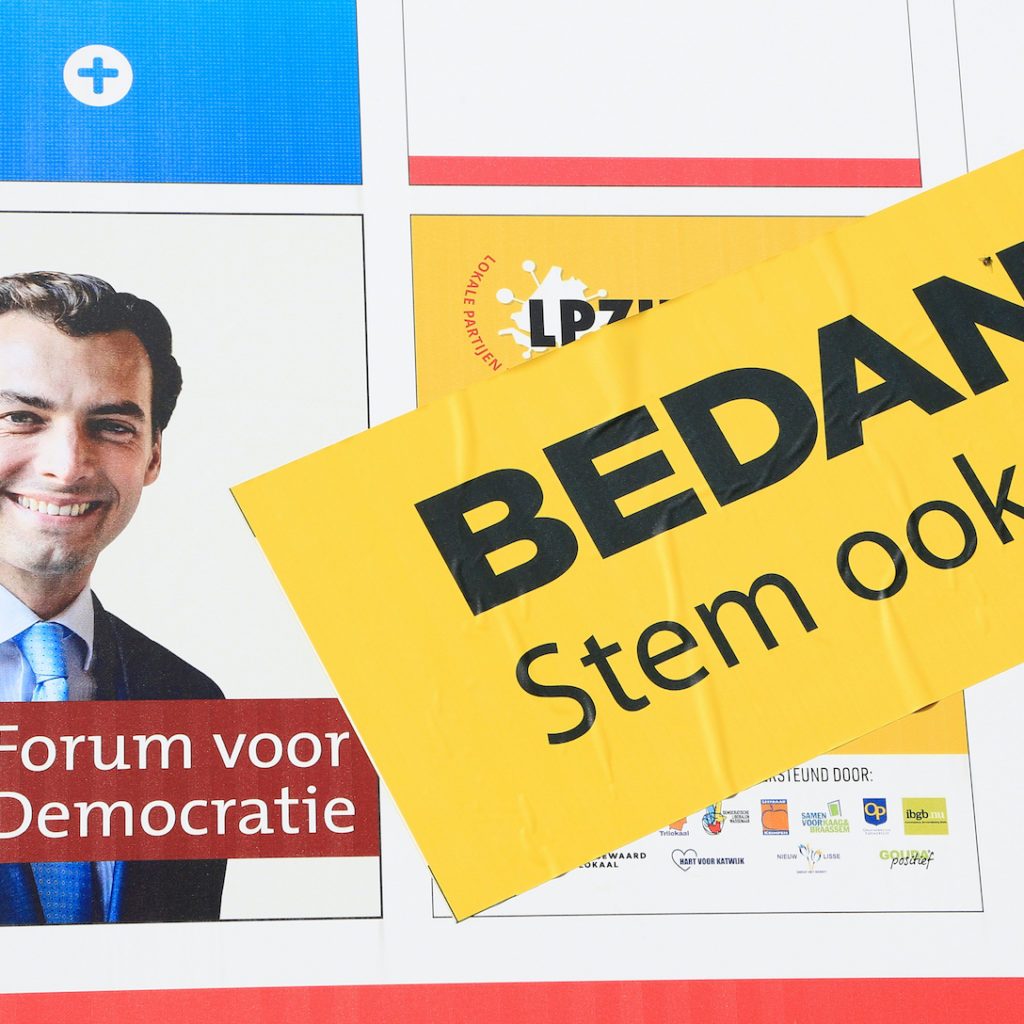 Portrait on a billboard of political leader of Forum Of Democracy, the big winner of the Provincial States elections, Thierry Baudet, Leiden, The Netherlands on March 30, 2019.

In Europe, the term right-wing populism is used to describe groups, politicians and political parties that are generally known for their opposition to immigration, especially from the Islamic world, and for Euroscepticism. It is also associated with ideologies such as anti-environmentalism, neo-nationalism, anti-globalization, nativism, and protectionism. European right-wing populists also typically support expanding the welfare state but barring undocumented immigrants from receiving government benefits; this concept has been referred to as “welfare chauvinism”.

Since the Great Recession, right-wing populist movements such as the National Rally (formerly the National Front) in France, the League in Italy, the Party for Freedom and the Forum for Democracy in the Netherlands, the UK Independence Party and the Brexit Party began to grow in popularity, in large part due to increasing opposition to immigration from the Middle East and Africa, rising Euroscepticism and discontent with the economic policies of the European Union. Moreover, US President Donald Trump also won the 2016 United States presidential election after running on a platform that included right-wing populist themes.

However, classification of right-wing populism into a single political family has proved difficult and it is not certain whether a meaningful category exists, or merely a cluster of categories since the parties differ in ideology, organization and leadership rhetoric. Unlike traditional parties, they also do not belong to international organizations of like-minded parties, and they do not use similar terms to describe themselves.

Thomas Greven also says in a report that right-wing populism across Europe and the US takes different forms depending on nationally specific factors such as political history, system and culture, but there are similarities. “Populism’s central and permanent narrative is the juxtaposition of a (corrupt) ‘political class,’ ‘elite,’ or ‘establishment,’ and ‘the people,’ as whose sole authentic voice the populist party bills itself,” he explains.

According to Greven’s report, right-wing populism adds a second antagonism of ‘us versus them.’ He writes “Based on a definition of the people as culturally homogenous, right-wing populists juxtapose its identity and common interests, with are considered to be based on common sense, with the identity and interests of ‘others,’ usually minorities such as migrants, which are supposedly favored by the (corrupt) elites.” Right-wing populists, says Greven, are not necessarily extremists, and extremists are not necessarily populists. “The latter, however, is very likely, as extremism lends itself to populism. The more ethno-centric the conception of the people, the more xenophobic the positioning against ‘the other,’ and the clearer the desire to overthrow the democratic system of governance, the more likely it is that a right-wing populist party is also extremist.”

Moreover, Greven writes that “right-wing populists also strategically and tactically use negativity in political communication. Supposed ‘political correctness’ and dominant discourses are at the same time the declared enemies of right-wing populists and their greatest friends. They allow the staging of calculated provocations and scandals, and of the breaking of supposed taboos. As this resonates with the needs of the media in terms of market demands and the news cycle, right-wing populist receive a lot of free media.”

Greven writes that right-wing populism across Europe and the US does not come with uniform, clearly defined characteristics; it takes different forms depending on nationally specific factors such as political history, system and culture. At the same time, there are similarities.

According to an article written by Annalisa Merelli right-wing populism, the leitmotiv of contemporary politics, is on the rise. “It certainly feels that way: Starting in the mid-2010s, democracies all over the world have turned toward the right, electing representatives that stand in stark contrast to those that pushed for globalization and international cooperation two decades earlier.”

She wrote right-wing populism isn’t a monolith and added that “It has different features in different countries. It’s hard, and somewhat simplistic, to ascribe all of the parties, movements, and leaders emerging in this historic shift to a single political trend. Yet, they do have some elements in common. The movements and parties that belong to it share xenophobic, nationalistic traits, a tendency toward authoritarianism, aggressive leadership, and an anti-elitist message.”

How quickly right-wing populism has spread globally, or at least in the countries with democratic systems, is remarkable, said Merelli and continued: “When this decade began, hardly any of the parties and leaders that now run the world, or appear set to, were on anyone’s radar. Now these movements are spreading quickly. Among the world’s democracies, a growing number has embraced right-wing populism, and either have governments led by populist parties, or supported by them.”

As Scott says it is safe to say that these right-wing movements will not disappear but will widen deepen and spread. It is a borderless movement, but it is also oddly incoherent. The promises of new politicians who appeal to these instincts does not have to be totally coherent and rational as the base if support itself is also free floating and cacophonous.

According to an article by Chantal Mouffe, it is the incapacity of traditional parties to provide distinctive forms of identifications around possible alternatives that has created the terrain for the flourishing of right-wing populism. She wrote “right-wing populist parties are often the only ones that attempt to mobilize passions and to create collective forms of identifications. Against all those who believe that politics can be reduced to individual motivations and that it is driven by the pursuit of self-interest, they are well aware that politics always consists in the creation of an ‘us’ versus a ‘them’ and that it implies the creation of collective identities.”

Stating that the current state of liberal democratic societies is particularly favorable for the development of right-wing populism, Mouffe said “The displacement of the idea of popular sovereignty dovetails with the idea that there is no alternative to the present order and this contributes to the creation of an anti-political climate that is easily exploited to foment popular reactions against the governing elites. We should realize that to a great extent the success of right-wing populist parties comes from the fact that they provide people with some form of hope, with the belief that things could be different. Of course, this is an illusory hope, founded on false premises and on unacceptable mechanisms of exclusion where xenophobia usually plays a central role.”

According to Mouffe, right-wing populism does indeed represent a real challenge to the democratic values that are at the core of the political identity of Europe. This is why it is urgent to find an adequate way to address its growing attraction. But this requires understanding the causes of this success and envisaging a truly political answer to the problems that they raise.

The political logic of populist hype: The case of right-wing populism’s ‘meteoric rise’ and its relation to the status quo; Glynos, J. & Mondon, A., 31 May 2019, Populism and Passions: Democratic Legitimacy after Austerity. Cossarini, P. & Vallespín, F. (eds.). Routledge, (Routledge Advances in Democratic Theory).

“Speaking Up or Silencing Out in the Face of Rising Right-Wing Populism: A Dynamic Test of the Spiral of Silence across 15 European Countries,” Thurre Frédéric Olivier, Gale Jessica, Staerklé Christian, International Journal of Public Opinion Research, 2019/10/19.

The Micro-Politics of Right-wing Populism — Wodak, R.E. 2019 In: Populism and Citizenship. Routledge

Against the ‘green totalitarianism’: anti-Islamic nativism in contemporary radical right-wing populism in western Europe — Betz, Hans-Georg 2007; Europe for the Europeans: the foreign and security policy of the populist radical right.

Caramani, Daniele and Luca Manucci (2019). National Past and Populism: The Re-Elaboration of Fascism and Its Impact on Right-Wing Populism in Western Europe. West European Politics. 42 (6):1159-87.

The Rise of Right-Wing Populism in Europe and the United States. A Comparative Perspective, Thomas Greven; Friedrich-Ebert-Stiftung, Washington, DC, Internationale Politikanalyse, May 2016.