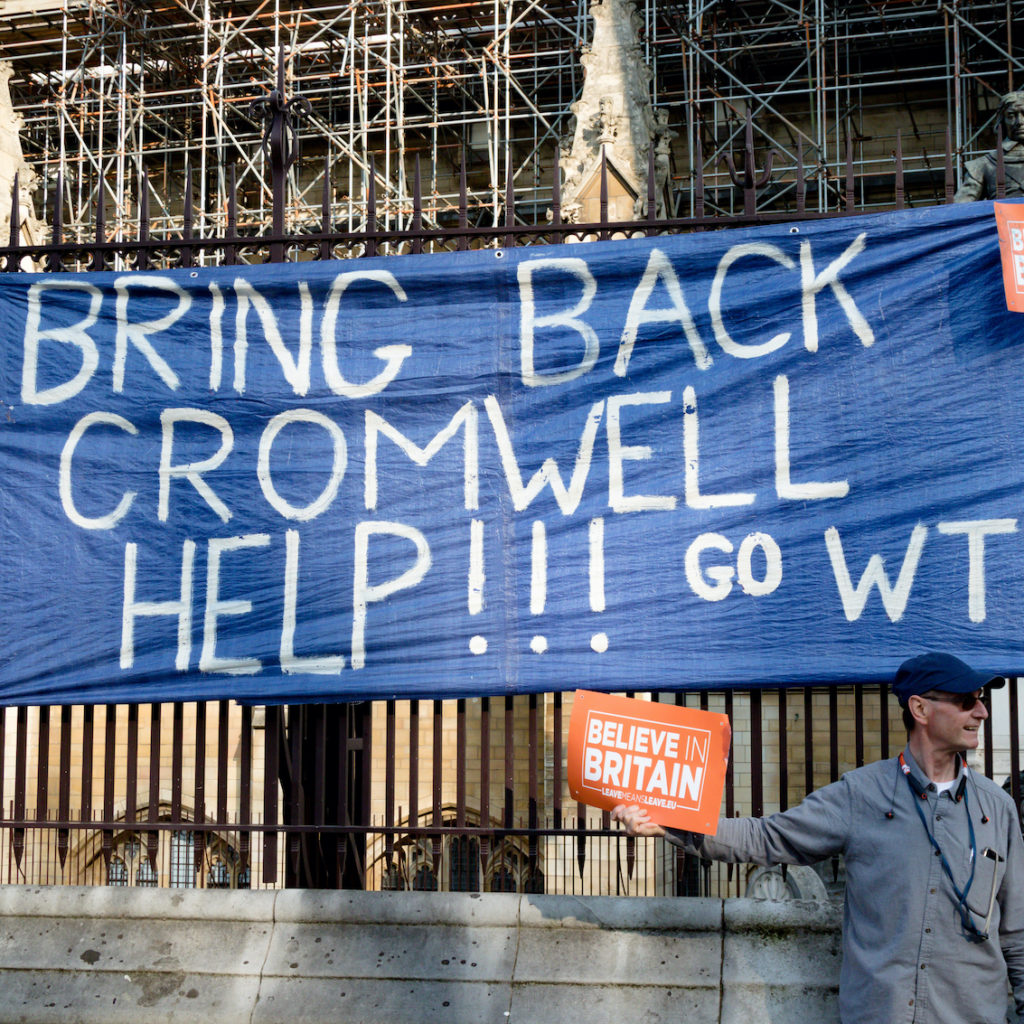 Pro-Brexit marchers outside the British Parliament on the day the UK should have left the EU on March 29, 2019.

Neo-nationalism or new nationalism is a type of nationalism that rose in the mid-2010s in Europe and North America and to some degree in other regions. It is associated with several positions, such as right-wing populism, anti-globalization, nativism, protectionism, opposition to immigration, Islamophobia, Sinophobia, and Euroscepticism where applicable. According to one scholar, “nationalist resistance to global liberalism turned out to be the most influential force in Western politics”. Particularly notable expressions of new nationalism include the vote for Brexit in the 2016 UK European Union membership referendum and the 2016 election of Donald Trump as the 45th President of the US.

Michael Hirsh describes new nationalism in an article as “a bitter populist rejection of the status quo that global elites have imposed on the international system since the Cold War ended, and which lower-income voters have decided—understandably—is unfair.” Michael Brendan Dougherty writes that new nationalism is a “broad nativist revolt” against post-Cold War politics long “characterized by an orthodoxy of free trade, nurturing the service economy, neoliberal trading arrangements, and liberalized immigration policies.” Dougherty says “the new nationalism challenges our post-1989 political orthodoxies. It questions whether Western governments should continue to facilitate the ever-freer movement of capital, goods, and people.”

The Economist wrote that “new nationalists are riding high on promises to close borders and restore societies to a past homogeneity.” The article also said that “All societies draw on nationalism of one sort or another to define relations between the state, the citizen and the outside world. Craig Calhoun, an American sociologist, argues that cosmopolitan elites, who sometimes yearn for a post-nationalist order, underestimate ‘how central nationalist categories are to political and social theory—and to practical reasoning about democracy, political legitimacy and the nature of society itself.’”

Stating that troubled by economic shocks in the Eurozone, waves of refugees from the Middle East, the resurgence of far-right xenophobic nationalism and resentments over seemingly being bossed around by the EU headquarters in Brussels, Clarence Page wrote in an article  that “a new neo-tribal nationalism has boiled up in European politics and to a lesser degree in the United States since the global economic meltdown of 2008.”

According to an interview given by Yascha Mounk, this is a real populist turn that has been happening for the last 15 or 20 years. “In recent decades, nationalist movements have shifted from vocal minorities to powerful parties that gained control of governments in places like Hungary, have lost national elections by the slimmest of margins in countries like Austria, and forced the United Kingdom out of the European Union,” he says and adds “economic stagnation among lower- and middle-class whites [has been] a main driver for nationalism’s rise around the globe.”

“You have a socially descending middle class that hasn’t had real gains in the standard of living in 30 years,” he said. “And at the same time, you seem to have real improvements in social status, if not necessarily economic status, for ethnic minorities. So, they feel like our country is being taken away.”

Two sides of the same coin?: The rise of neo-nationalism and civic integrationism in multi-ethnic Europe — Eger, Maureen A.; Hjerm, Mikael; The effects of race, Stellenbosch: AFRICAN SUN MeDIA 2018 : 151-167.

“Why Vote Against Best Interests or Why is Populism Persuasive?” Marcia Pally, in Torsten Meireis and Florian Hoehne (Eds.), Religion and Neo-Nationalism in Europe, Baden-Baden: Nomos Press, 2020.