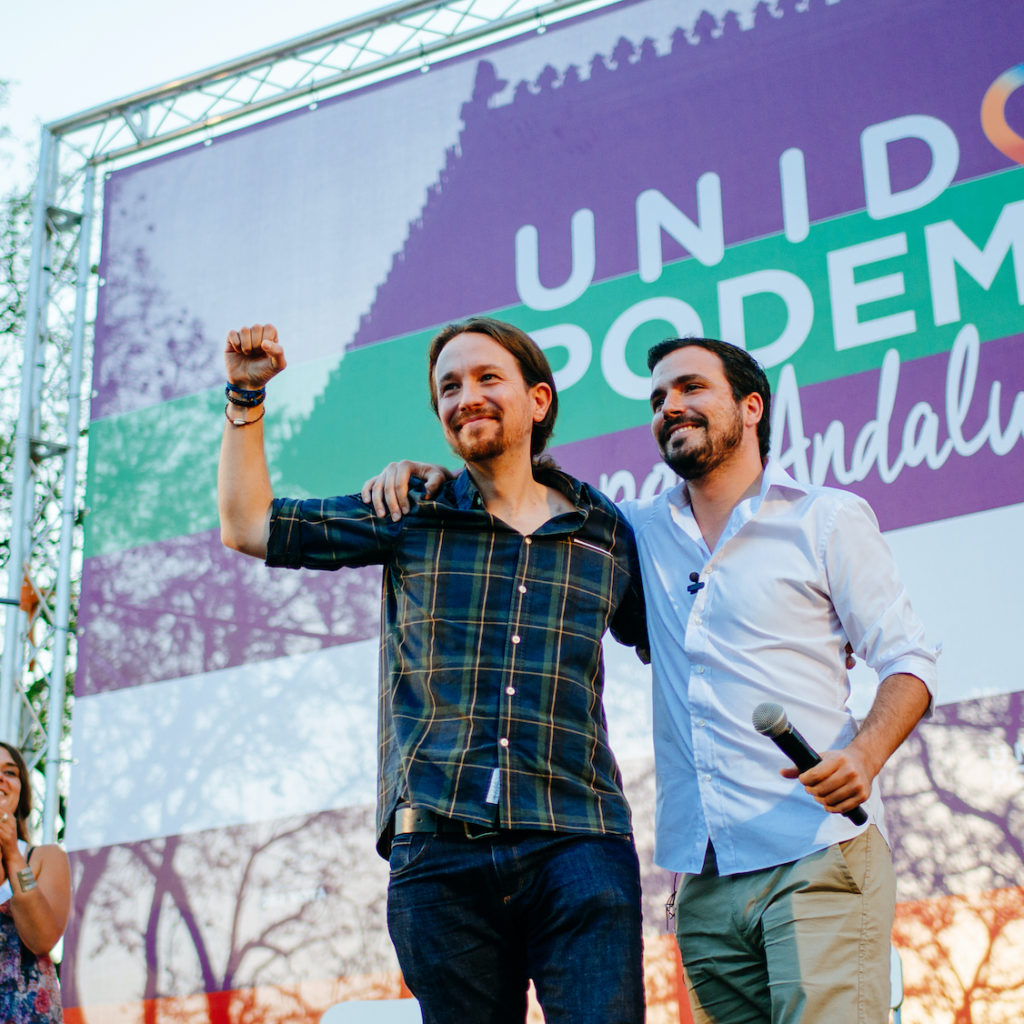 Pablo Iglesias (Podemos) and Alberto Garzon (Izquierda Unida) in a rally together of Unidos Podemos on Jun 23, 2016 in Jerez de la Frontera.

Left-wing populism, or social populism, is a political ideology that combines left-wing politics and populist rhetoric and themes. The rhetoric of left-wing populism often consists of anti-elitist sentiments, opposition to the establishment and speaking for the “common people”. The important themes for left-wing populists usually include anti-capitalism, social justice, pacifism and anti-globalization, whereas class society ideology or socialist theory is not as important as it is to traditional left-wing parties.

The criticism of capitalism and globalization is linked to anti-militarism, which has increased in the left populist movements as a result of unpopular US military operations, especially those in the Middle East. It is considered that the populist left does not exclude others horizontally and relies on egalitarian ideals. Some scholars point out nationalist left-wing populist movements as well, a feature exhibited by Kemalism in Turkey for instance or the Bolivarian Revolution in Venezuela. For left-wing populist parties supportive of minority rights among others, the term “inclusionary populism” has been used. With the rise of Greek Syriza and Spanish Podemos during the European debt crisis, there has been increased debate on new left-wing populism in Europe.

According to Jan-Werner Mueller, other supposed forms of left-populism should be understood as attempts to re-invent social democracy for the twenty-first century, in ways that evidently respect the parameters of pluralist democracies. If nothing else, such attempts have generated new choices for citizens and thereby alleviated contemporary crises of democratic representation – contrary to the lazy mainstream view that new movements and parties must somehow be “anti-system” and therefore part of the problem, rather than the solution.  But – this is the important lesson – these parties and movements have done well because they are left, not because they are in any meaningful sense populist.

Proponents of left-wing populism have put forward two main reasons for their strategy.  Theorists like Chantal Mouffe already claimed in the 2000s that a convergence of left and right on centrist policies had led to a state of “post-democracy.” As the Third Way policies adopted by social democrats across the West amounted to “Thatcherism with a human face,” citizens no longer had a real choice: to stick with the metaphor, voters could only opt for Thatcherism with or without a human face, or, as Mouffe put it at one point: the difference was no bigger than that between Pepsi and Coke.

A paper released by Alexandros Kioupkiolis and Giorgos Katsambekis urged that the Greek Syriza and the fledgling Podemos in Spain represent two peaks of a new wave of left-wing populism which has surged forth in contemporary Europe, mainly in the crisis-hit South, effectively contesting general elections and winning power. “Like Syriza, Podemos gives the lie to the conventional wisdom of European political science on the topic of contemporary European populism, which is stereotypically cast as reactionary, nationalist, xenophobic, exclusionary and anti-European,” wrote the authors.

The paper underlined that both party formations embrace the project of a politically integrated and solidary Europe, they defend immigrants and socially marginalized sectors, they press a strong social rights agenda, they target not only political but also economic and social elites and they claim to fight for popular sovereignty, social justice and democratization. Moreover, they deliberately enunciate a populist discourse and they pursue a populist political strategy as understood in Ernesto Laclau’s terms.

“However, these parties are not the first successful instances of radical left populism in Europe. Some years before them, their counterparts in Northern Europe, namely the Dutch SP or the French coalition Front de Gauche had already made their presence felt,” according to Kioupkiolis and Katsambekis who continued to write that “Interestingly, though, and despite their initial gains, those parties have not managed to achieve a decisive breakthrough by taking advantage of the popular grievances produced by the ongoing economic crisis. In what follows we primarily focus on the comparison between Podemos and SYRIZA, as the most successful actors of the populist radical left party family in order to draw some more general conclusions regarding the particularities and prospects of such parties.”

Meanwhile, according to an article by Lazaros Karavasilis, from the People’s Party in US onwards, left-wing populism has been at the center of Latin American politics, especially after the Second World War. From leaders like Getulio Vargas to the more recent examples of Evo Morales and Hugo Chavez, the tradition of left-wing populism in South America has a long and complex history. Karavasilis asserts that in these cases left-wing populism has contributed to making the political systems of each country more inclusive to groups that were previously excluded or marginalized (minorities, indigenous people etc.). And regardless of its economic successes or failures it has been a crucial force in creating a more democratic political environment. This has become the signature effect of left-wing populism in the 21st century through the so-called ‘pink tide’.

Although, the appearance of left-wing populist parties and leaders is far more evident in South America, Europe has its own smaller scale experience of similar parties before the crisis of 2008, wrote Karavasilis and stated that “the Socialist Party in the Netherlands and Die Linke in Germany have been some of the most prominent cases of left-wing populism in Europe in the last couple of decades. Despite the fact that they have never participated in government and haven’t had a significant breakthrough comparable to the populist radical right, they have managed to promote the development of participatory mechanisms and democratic institutions combining a left-wing populist discourse and a socialist programme.”

Halikiopoulou, D. (2014) Radical left-wing Euroscepticism in the 2014 elections: a cross-European comparison. In: Is Europe afraid of Europe? An Assessment of the result of the 2014 European Elections. Wilfried Martens Centre for European Studies / Karamanlis Foundation, Athens, pp. 112-126.

Huber, Robert A., and Christian H. Schimpf. 2017. ‘On the Distinct Effects of Left-Wing and Right-Wing Populism on Democratic Quality’ Politics and Governance 5(4): 146–165.