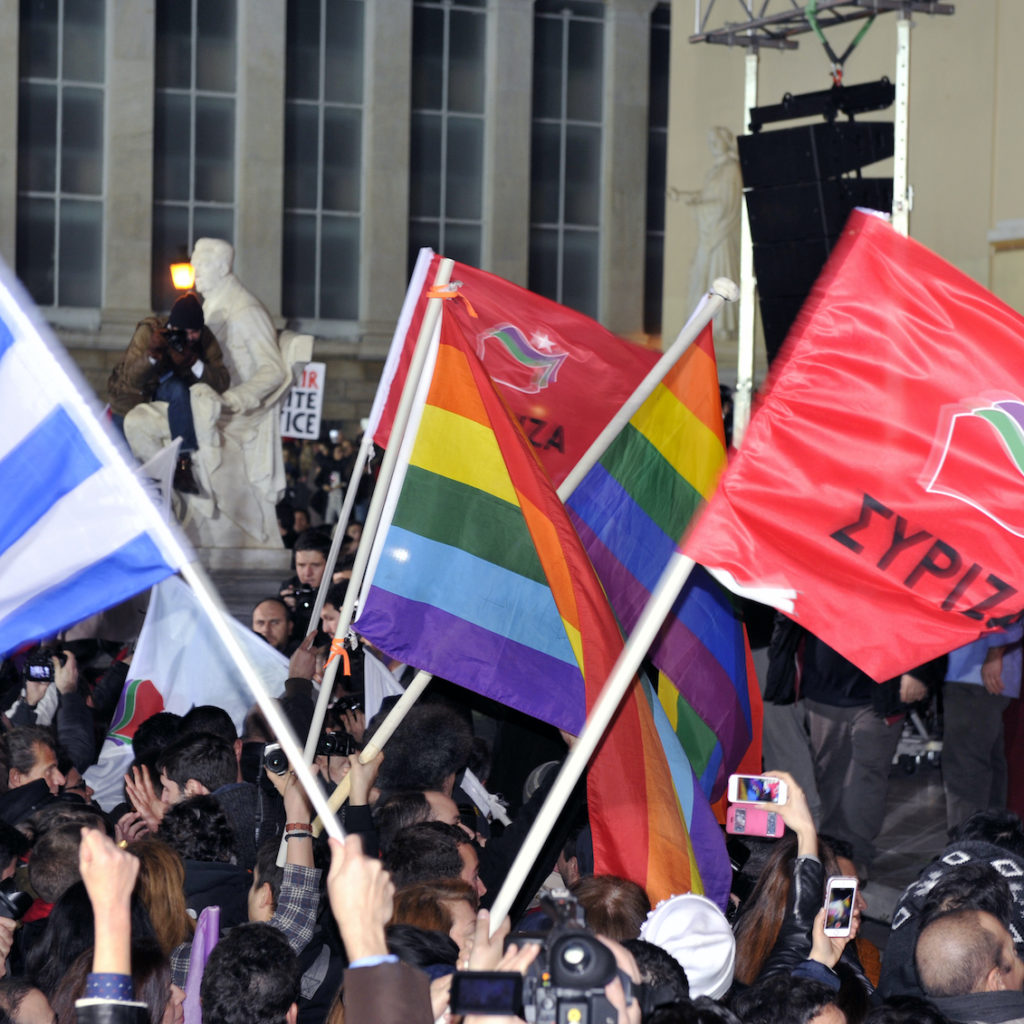 Supporters of inclusionary left-wing populist party Syriza demonstrated with flags of Greece, party's flag and the flag of gay movement outside Athens University on January 25, 2015. Syriza, won general elections in 2015.

Inclusionary populism, also called left-wing populism or social populism, is a political ideology that combines left-wing politics and populist rhetoric and themes. Its rhetoric often consists of anti-elitist sentiments, opposition to the establishment and speaking for the “common people”.

Inclusionary populism allows for the political integration of excluded social groups and people, thus enlarging the boundaries of democracy, according to an article by Grigoris Markou. To him, it is crucial to note that Latin-American and south-European populisms are mostly inclusive and egalitarian, while North-American and North-European populisms are principally exclusionary and hierarchical in profile.

According to Dani Filc “colonialism is an important key to understanding the development of either form of populism”. Inclusive populism appears mostly in colonized countries and regions (such as Latin America) where the people are constituted by the inclusion of different ethnic and social groups. On the contrary, exclusionary populism appears mainly in former colonialist countries (such as North European) because its nativism is that of the colonizer (and their ethnocentrism produces a racist discourse).

In Greece, inclusionary populism, whether it was led by Andreas Papandreou’s PASOK or Tsipras’ SYRIZA has dominated the populist political landscape since the fall of the Greek dictatorship, according to Markou who said “Greece was not a colony of a powerful west European country, but it has always been economically and culturally dependent on the west. And as a result, this shadowy dependence on the west (that we can call crypto-colonialism) might explain the dominance of both an anti-imperialist discourse and an inclusionary populism flourishing among the ‘lower orders’ of Greek politics.”

To Markou, left-wing populist forces in Latin America such as those led by Morales in Bolivia and Kirchner in Argentina, have managed to fulfil many popular demands and to create the conditions for a new ‘pluralistic’ and a more democratic society. “But what has happened in the case of European left-wing parties such as SYRIZA?” he asked and then answered: “It is true that SYRIZA’s populism in opposition managed to improve the quality of democracy, through its struggles against a neoliberal and technocratic EU. The radical left party was transformed into the most important political movement in Greece and became the ‘voice’ of the marginalized people (‘the silent majority’). However, SYRIZA’s inclusive populist promise for a different Europe – beyond austerity policies and neoliberalism – and for the radical transformation of the political and economic system is still in limbo.”

They also said that by arguing that European populism is predominantly exclusionary and Latin American populism is primarily inclusionary, they are not claiming that the former inevitably has a negative impact on democracy, while the latter exclusively embodies a positive force for democracy: “In fact, we should be very careful about making normative judgements about populism, since the latter can be both a threat to and a corrective for democracy. For instance, populist actors and parties usually give voice to groups that do not feel represented by the elites and obligate them to react and change the political agenda to include these marginalized voices. But populist forces might also refer to the idea of popular sovereignty with the aim of dismantling the checks and balances that are inherent to liberal democracy. In other words, the re-politicization of society that is fostered by all types of populist forces has an ambivalent impact on democracy.”

To another article written by Markou, there is a significant difference between the two types of populism. Inclusionary populism is usually expressed by left-wing movements and is combined with a kind of progressive patriotism, while exclusionary populism is expressed by extreme right-wing parties and is associated with nationalism. Inclusionary populism also allows for the political integration of marginalized and excluded people, thus expanding the boundaries of democracy. Exclusionary populism understands the people as an ethnically or culturally homogeneous unit and excludes people (migrants, minorities etc.) on the grounds of racist and nativist reasons. Latin-American and South-European populism are mostly inclusive and egalitarian (socioeconomic dimension), while North American and North European populism are principally exclusionary and hierarchical in profile (sociocultural dimension).

To Markou, left-wing populist movements do not necessarily involve nationalism and xenophobia, as is demonstrated by their anti-racist orientation. However, it is possible to utilize a type of progressive patriotism, a sense of pride in a culturally or territorially defined community. Patriotism is usually defined as the persistence of love or loyalty to a country and is distinguished from xenophobia or hatred of others. Patriotism taps the affective component of one’s feelings toward one’s country, while nationalism reflects a perception of national superiority and an orientation toward national dominance.

Markou, Grigoris. (2017). The Rise of Inclusionary Populism in Europe: The Case of SYRIZA. Contemporary Southeastern Europe. 4. 54-71.

Markou, Grigoris. (2016). The defeat of inclusionary populism in Greece: what happens next?. Open Democracy. https://www.opendemocracy.net/en/can-europe-make-it/defeat-of-inclusionary-populism-in-greece-what-happens-next-0/