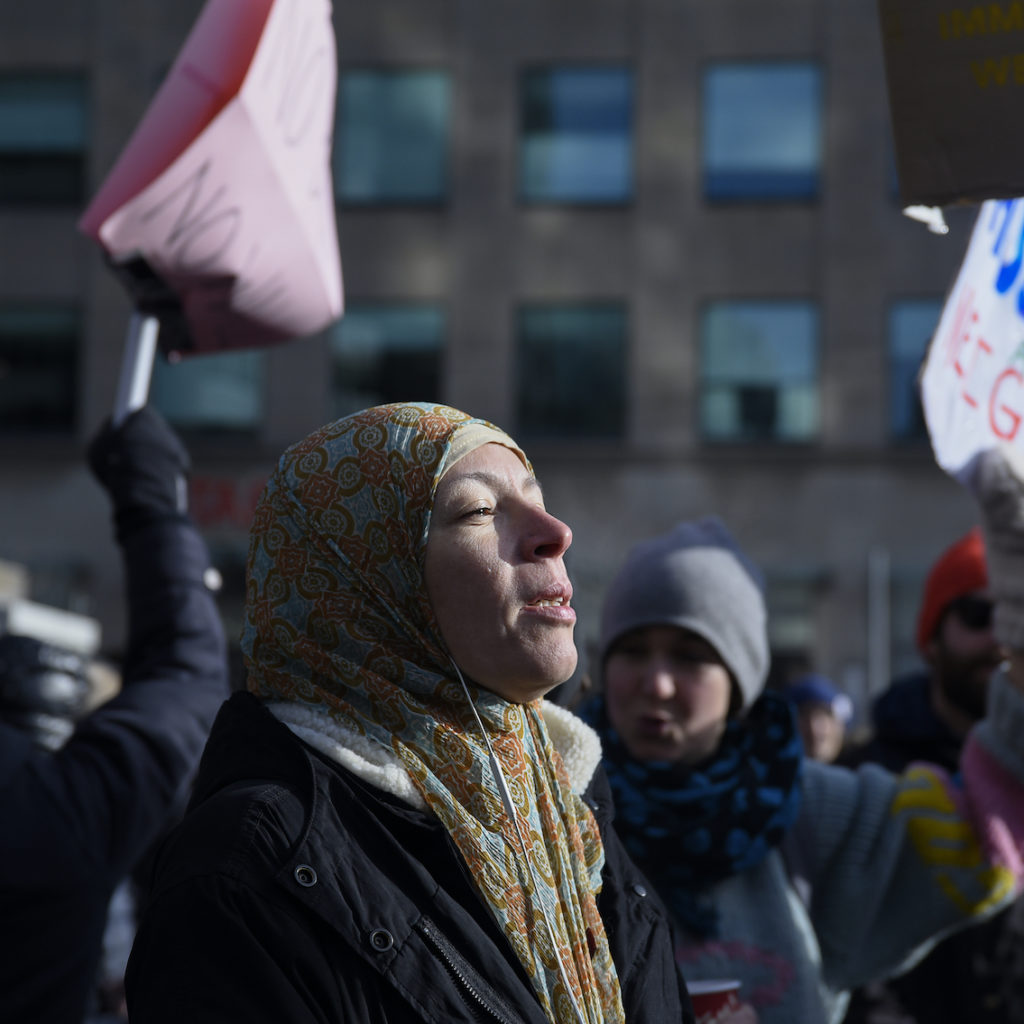 A Muslim woman chanting slogans during a protest in front of the US Consulate to denounce Donald Trump's immigration policies on January 30, 2017 in Toronto, Canada.

While populism always entails both exclusionary and inclusive features, different types of populism can be distinguished on the basis of this distinction. Today, European populism is predominantly exclusive, while Latin American populism is chiefly inclusive, according to an article by Cas Mudde and Cristobal Rovira Kaltwasser. Exclusionary populism defines ‘the people’ in a much stricter sense, generally being focused on a particular sociocultural group and antagonistic against minority groups.

Moreover, Ben Margulies states in an article that exclusionary populism defines ‘the people’ as excluding not only the elite, but also some other group of people who are not within the elite, but who are resident in the state. “Almost all definitions of right-populism stress a focus on an ethnically homogenous nation or people. A classic example – perhaps the classic example – of this sort of non-elite discourse is the denunciation of Jews as “anti-national” or “alien.” More recently, Muslims have become the subject of exclusion. Most often, these are defined on the grounds of ethnicity, race, religion or immigrant origin,” says Margulies.

According to an article by Hans-Georg Betz, the core of exclusionary populism consists of a restrictive notion of citizenship, which holds that genuine democracy is based on a culturally, if not ethnically, homogeneous community; that only long-standing citizens are full members of civil society; and that society’s benefits should only accrue to those who have made a substantial contribution to it. Betz writes that “in its more extreme cases, exclusionary populism has taken the form of cultural nativism which, rather than promoting notions of ethno-cultural superiority, aims at the protection of cultural identity and idiosyncratic values and ways of life against alien intrusion and contamination. In the contemporary populist right, this means, above all, safeguarding and defending the achievements and gains of European culture and civilization.”

According to the article by Mudde and Kaltwasser, both Eastern and Western Europe have mostly very affluent and egalitarian societies. This does not mean that there are no socioeconomic differences, but the weakest groups can still rely on a more or less extensive welfare state and enjoy full civil and political rights. In Europe populists primarily focus on protecting these conditions, which they consider increasingly threatened by outside forces (notably immigrants). One of the key aspects of the populist radical right programme is welfare chauvinism, where a fairly generous welfare state is generally supported for the ‘own people’, but ‘aliens’ (such as immigrants, refugees or Roma) are to be excluded from most of the provisions…

Because, say Mudde and Kaltwasser, immigration is understood as a zero-sum game: either the ‘outsiders’ obtain something at the cost of the ‘natives’, or the latter advance their material incorporation as a result of the exclusion of the immigrants. Thus, specific groups suffer from political exclusion and they are prevented from participating (fully) in the democratic system and they are consciously not represented in the arena of public contestation.

Grigoris Markou writes in an article that exclusionary populism is expressed by extreme right-wing parties and is associated with nationalism. Exclusionary populism understands the people as an ethnically or culturally homogeneous unit and excludes people (migrants, minorities etc.) on the grounds of racist and nativist reasons. To him, Latin-American and South-European populism are mostly inclusive and egalitarian (socioeconomic dimension), while North American and North European populism are principally exclusionary and hierarchical in profile (sociocultural dimension).

Markou also asserts that exclusionary populism appears mainly in former colonialist countries (such as in Northern Europe) because its nativism is that of the colonizer. He explains that “racism, as an innate characteristic of their culture, plays a key role in the formation of their identity (the people as an ethnocultural unit). In the past, the colonialist denied the benefits of citizenship to the foreign peoples, while today the former colonialist prohibits the entry of immigrants into the country. It is interesting that many of the immigrants targeted by exclusionary populist parties come from the former colonies of those countries. As we understand, the ethnocentrism of their culture does not allow the conservative and radical right parties to express an inclusionary populism.”

When exclusionary populism that vilifies marginalized populations gains traction in dominant discourse, it risks normalizing racism, nativism, and xenophobia, writes Stijn van Kessel in an article. “Forms of talk and behavior that were previously relegated to private spaces can become legitimized in the public sphere, which can in turn influence the character of routine interactions between members of dominant and marginalized groups,” he says and adds that “Reports of growing discrimination and violence against Eastern Europeans and Muslims after Brexit and of rising Islamophobia as a result of Donald Trump’s nomination provide some suggestive evidence for populism’s social consequences.”