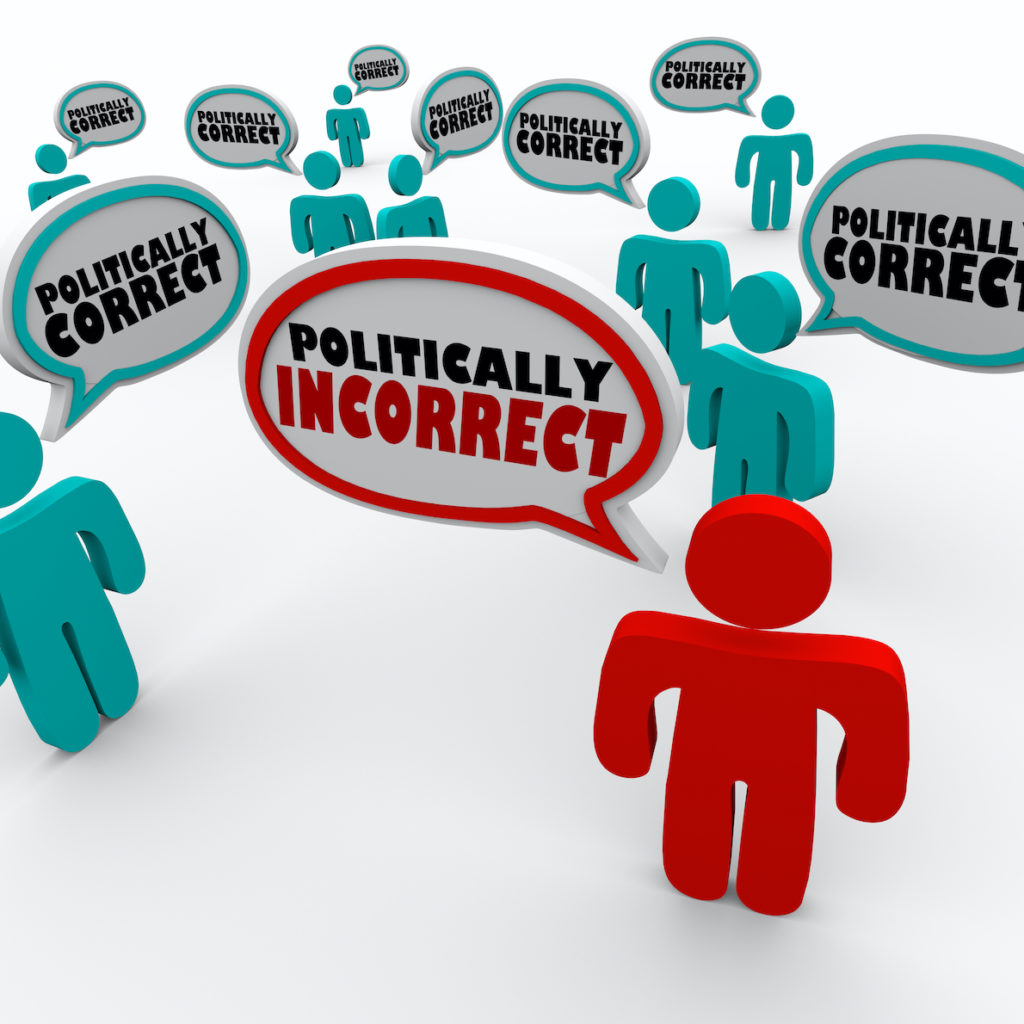 In theory, according to an article written by Anna Szilágyi, political correctness (PC) simply functions as a neutral, descriptive reference to the principle of avoiding utterances and actions that can marginalize or offend certain groups of people. However, because it includes the word ‘correctness,’ PC can also be used and perceived as a normative expression. The noun ‘correctness’ connotes approval and radiates authority. It indicates, with an imperative tone, that something should be done in a particular way. In this regard, the term political correctness can evoke the feeling of being talked down to and even subordinated.

On the other hand, political correctness, to an article by Cynthia Roper, is a term which is used to refer to language that seems intended to give the least amount of offense, especially when describing groups identified by external markers such as race, gender, culture or sexual orientation. The concept has been discussed, disputed, criticized, and satirized by commentators from across the political spectrum. The term has often been used derisively to ridicule the notion that altering language usage can change the public’s perceptions and beliefs as well as influence outcomes.

In public discourse and the media, the term is generally used as a pejorative with an implication that these policies are excessive or unwarranted. The term first appeared in Marxist-Leninist vocabulary following the Russian Revolution of 1917. At that time, it was used to describe adherence to the policies and principles of the Communist Party of the Soviet Union. During the late 1970s and early 1980s the term began to be used wittily by liberal politicians to refer to the extremism of some left-wing issues, particularly regarding what was perceived as an emphasis on rhetoric over content.

In the early 1990s the term was used by conservatives to question and oppose what they perceived as the rise of liberal left-wing curriculum and teaching methods on university and college campuses in the US. By the late 1990s the usage of the term had again decreased, and it was most frequently employed by comedians and others to lampoon political language. At times it was also used by the left to scoff at conservative political themes.

It is a fact that since the late 1980s, the term has been used to describe a preference for inclusive language and avoiding language or behavior that can be seen as excluding, marginalizing, or insulting groups of people considered disadvantaged or discriminated against, especially groups defined by sex or race. This usage was popularized by a number of articles in The New York Times and other media throughout the 1990s and was widely used in the debate surrounding Allan Bloom’s 1987 book The Closing of the American Mind.

Commentators on the political left in the US contend that conservatives use the concept of political correctness to downplay and divert attention from substantively discriminatory behavior against disadvantaged groups. They also argue that the political right enforces its own forms of political correctness to suppress criticism of its favored constituencies and ideologies. In the US, the term has played a major role in the “culture war” between liberals and conservatives.

According to Szilágyi, the European populist radical-right parties associated PC with the elite. At a joint press conference in 2016, the French National Front president Marine Le Pen, the Dutch Freedom Party leader Geert Wilders, and the Italian Lega Nord secretary Matteo Salvini referred to “Brussels’ politically correct élite.” In this case PC was used as an ‘epithet.’ The label indicated that the European Union is led by elites who have one single, specific concern: political correctness. Szilágyi says “By reducing PC to an elite concern, politicians suggest three things: i) Political correctness is irrelevant to the actual social and political realities. ii) The power holders are incapable of addressing the real problems of societies. Citizens of Europe are ‘tired of governments that don’t listen to them and of Brussels imposing decisions that are not put under scrutiny.’ iii) The third implication is that politicians who attack PC side with the people.”

According to an article by Thomas Greven, right-wing populists strategically and tactically use negativity in political communication. “Supposed ‘political correctness’ and dominant discourses are at the same time the declared enemies of right-wing populists and their greatest friends. They allow the staging of calculated provocations and scandals, and of the breaking of supposed taboos. As this resonates with the needs of the media in terms of market demands and the news cycle, right-wing populist receive a lot of free media,” he wrote.

Tools at the hands of right-wing populists, to Greven’s article, range from the calculated break of supposed taboos and disrespect of formal and informal rules (e.g., ‘political correctness’) to emotional appeals and personal insults. He added “conspiracy theories and biologist or violent metaphors have a place. In line with the anti-pluralism of its conception of the people, right-wing populists refuse the give and take of political compromise and demand radical solutions (concerning their core issues).” On the other hand, Donald Trump’s promises of easy solutions to complex problems, without any need for compromise or negotiation, according to Greven, are quite obviously only workable in a fantasy world, but they are appealing to a highly disaffected section of the American public, as are his constant challenges of the supposedly hegemonic ‘political correctness’.

Meanwhile in an article, Arwa Mahdawi writes that from the gender-neutral ashes of political correctness a new sort of PC culture has risen. You could call it populist correctness: a virulent policing of language and stifling of debate that is rapidly and perniciously insinuating itself into daily life in Trump’s America and Brexit Britain. Populist correctness is the smearing and silencing of points of view by labelling them “elitist” — and therefore at odds with the will of the people and the good of the country. According to her, populist correctness doesn’t bother itself with inconvenient details. Rather it carves the country up into a neat dichotomy of ordinary people versus the elite.

She says “as well as silencing opposing opinions by branding them elitist, populist correctness works to rebrand ideas, creating a new vocabulary for a new world order. The right prides itself on being straight-talking, on calling a spade a spade, but when it comes to calling a Nazi a Nazi or a racist a racist — well then, things are more vague. They are the ‘alt-right’, please.” While, according to Mahdawi, the outrage of populist correctness is framed more as righteous indignation: “It is not you who is offended. You are offended on behalf of the people. On behalf of your country. Your outrage is morally superior.”

Mahdawi underlines that the most dangerous thing about populist correctness is the way liberals have been swept into it. “Always keen for a little self-flagellation, the triumph of Trump and Brexit triggered a crisis of liberal confidence. Perhaps we have been out-of-touch and elitist, wrote columnist after columnist. Perhaps political correctness did go too far. Perhaps we shouldn’t say ‘racist’, perhaps we should say ‘alt-right’. Populist correctness isn’t just making us question our right to dissent, it’s quite literally putting words in our mouths,” she warns.