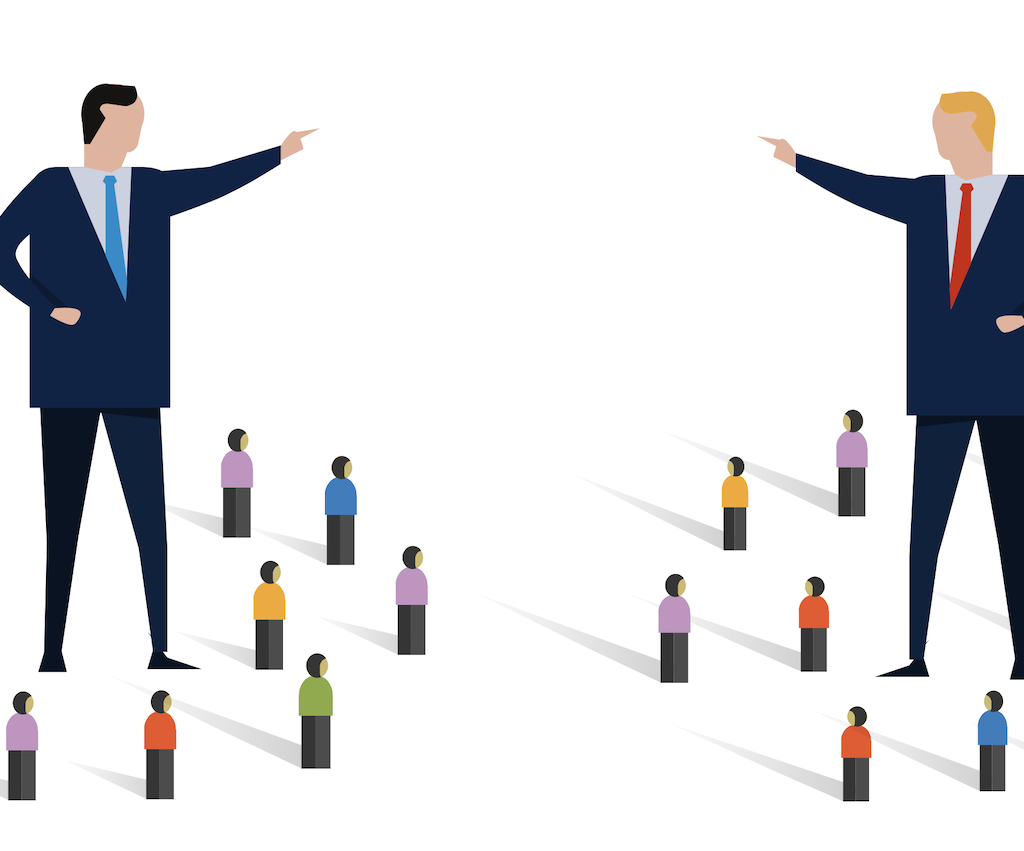 Mass polarization or popular polarization occurs when an electorate’s attitudes towards political issues, policies, and celebrated figures are neatly divided along party lines. At the extreme, each camp questions the moral legitimacy of the other, viewing the opposing camp and its policies as an existential threat to their way of life or the nation as a whole. Many political scientists consider political polarization a top-down process, in which elite polarization leads to — or at least precedes — popular polarization.

Political polarization, according to an article by Emilia Palonen, is a political tool — articulated to demarcate frontiers between ‘us’ and ‘them’ and to stake out communities perceived as moral orders. Palonen writes that “polarization is a situation in which two groups create each other through demarcation of the frontier between them. The dominant political frontier creates a point of identification and confrontation in the political system, where consensus is found only within the political camps themselves.”

Polarization is reproduced in all political and social contexts with an intensity that distinguishes it from mere two-party politics, according to Palonen who says “It is a totalizing system, as it aims to dominate the existing systems of differences and identities. Similar logic can be found in other polarized contexts, such as those in the USA or Italy. The situation constitutes a problem for democracy insofar as democracy is seen as the articulation, combination and promotion of political values, demands and preferences that direct policies and seek to find a ground beyond the political elites, not mere regular elections.”

Palonen says that in polarization there is no middle ground. One has to choose sides. The political opponent is turned into an enemy, with an illegitimate and threatening position. Polarization also requires consensus on both sides of the main frontier, there is little space for diversity. Political polarization produces strong leaders due to the lack of contestation from within the party or coalition. They in turn secure their position by strengthening the polarization. This has been the main rhetorical strategy of Viktor Orban, a key populist politician in post-Communist Hungary, the leader of the Fidesz party.

In the political rhetoric identities, symbols and history carry different meanings for the two poles. According to Palonen, the two camps of the bipolar hegemony sustain themselves through their opposition to one another rather than through their content. Polarization can be seen as a system of dual consensus, reproducing the typical problems of consensus. “Usually, but not exclusively, populism is attributed to small radical parties, which often rally on nationhood and anti-elitism, and are very successful in using media in order to put their message through,” says Palonen.

“Alternatively, one of the main parties is seen as a populist. In Hungary there are two,” reminds Palonen and adds that “Populism is a hegemonic formation. They profess black-and-white rhetoric on the people and the elite, the tendential empty stances on values and policies and a stark confrontation with the political adversary. Post-Communist politics in Hungary are politics of a bipolar hegemony and competing populism. A ‘hegemonic formation’ fixes a maximum amount of meanings together or blocks them out of it. In the political rhetoric identities, symbols and history carry meanings for the two poles. The two camps of the bipolar hegemony sustain themselves through their opposition to one another rather than through their content. Polarization can be seen as a system of dual consensus, reproducing the typical problems of consensus.”

According to Palonen, polarization solves the initial problem of fragmentation, lack of unity, by instituting a frontier that sustains two communities as a bipolar hegemony. It requires constant rearticulation and, therefore, constant antagonism on that frontier… “Similar to the one-party system or consensus, polarization and bipolar hegemony bracket out less important demands and maintain an illusion of unity, rejecting anything that might shake internal cohesion,” she underlines.

On the other hand, a World Bank report shows that many countries in Europe and Central Asia (ECA) are witnessing significant political polarization. Increasing numbers of voters appear to be moving away from centrist positions, abandoning long-held political commitments, and losing faith in established parties and to some extent institutions… Many issues — including economic difficulties, ethnic rivalries, the refugee crisis, and geopolitical tensions — may be driving political polarization in ECA. The importance of each varies by country. There does appear to have been some shift across ECA away from traditional, more centrist political parties, as well as toward more populist political opinions, since the beginning of this century.

According to an article by Samuel Handlin, extremely polarized politics in countries such as Bolivia, Ecuador and Venezuela emerged through a mechanism termed polarizing populism, in which political outsiders leveraged popular anti-systemic appeals to underwrite otherwise risky and highly controversial policy programs. The occurrence (or not) of polarizing populism in South America, in turn, can be explained by the conjunction of state crises before the left turn period and the strength of the extant infrastructure of left-wing political mobilization each country possessed as the post–Cold War era began, which shaped incentives for outsiders to build ideologically narrow or broad elite coalitions.

Handlin says highly polarizing party systems in South America emerged through a mechanism of ‘polarizing populism,’ distinguished by two characteristics: i) Populist figures and movements emerged to challenge for, and often win, executive power. ii) These populist figures not only politicized a pro-systemic/anti-systemic dimension of politics, but they also advanced radical programmatic agendas greatly at odds with those of status quo opponents.

Meanwhile, a central claim of Hadlin’s article is that polarizing populism is enabled by state crises. State crises refer to situations characterized by two necessary elements: i) States perform poorly: Basic institutions such as the public administration, the judiciary, and the police prove inefficient and highly corrupt in their conduct and provision of goods and services. ii) Citizens come to possess very little confidence in these basic state institutions and government in general.  However, polarizing populism required not just state crisis but also contextual conditions that induced outsiders to build elite coalitions on the left. The proesses by which populist outsiders build movements, especially the coalitions and alliances they forge, therefore become critical in determining whether populists will adopt pragmatic or polarizing positions, and therefore whether or not they will transform party systems in highly polarizing directions.

Webster, Steven W., and Alan I. Abramowitz. 2017. The Ideological Foundations of Affective Polarization in the U.S. Electorate. American Politics Research 45: 621- 647.

Jennifer McCoy and Murat Somer, “Toward a Theory of Pernicious Polarization and How it Harms Democracy: Comparative Evidence and Possible Remedies,” in Annals of American Academy of Political and Social Sciences, 681, no. 1 (January 2019): 234-271.

Abramowitz, Alan I. 2014. Long-Term Trends and Short-Term Forecasts: The Transformation of U.S. Presidential Elections in an Age of Polarization. PS: Political Science and Politics: 47, April: 289-292.

Abramowitz, Alan I. I. 2010. Transformation and Polarization: The 2008 Presidential Election and the New American Electorate. Electoral Studies, 29: 594-603.

Abramowitz, Alan I. 2017. It Wasn’t the Economy, Stupid: Racial Polarization, White Racial Resentment, and the Rise of Trump. In Larry Sabato, Kyle Kondik and Geoff Skelley, eds., Trumped: The 2016 Election that Broke All the Rules. New York: Rowman and Littlefield.

Abramowitz, Alan I. 2015. Partisan Nation: The Rise of Affective Polarization in the American Electorate. In John Green, Daniel Coffey and David Cohen, eds., The State of the Parties: The Changing Role of Contemporary American Parties, 7th edition. New York: Rowman and Littlefield.

Abramowitz, Alan I. 2013. Voting in a Time of Polarization: Why Barack Obama Won the 2012 Presidential Election and What It Means. In Larry J. Sabato, ed., Barack Obama and the New America: The 2012 Election and the Changing Face of Politics. New York: Rowman and Littlefield.

Firat, Rengin B. and Pascal Boyer. 2015. “Coalitional Affiliation as a Missing Link Between Ethnic Polarization and Well-being: An Empirical Test from the European Social Survey.” Social Science Research, Vol. 53, pg. 148-161.

Somer, Murat, and Jennifer McCoy. “Transformations through Polarizations and Global Threats to Democracy.” The ANNALS of the American Academy of Political and Social Science 681, no. 1 (January, 2019): 8–22.

Where populist citizens get the news: An investigation of news audience polarization along populist attitudes in 11 countries — A Schulz; Communication Monographs, 2019, 86 (1), 88-111.