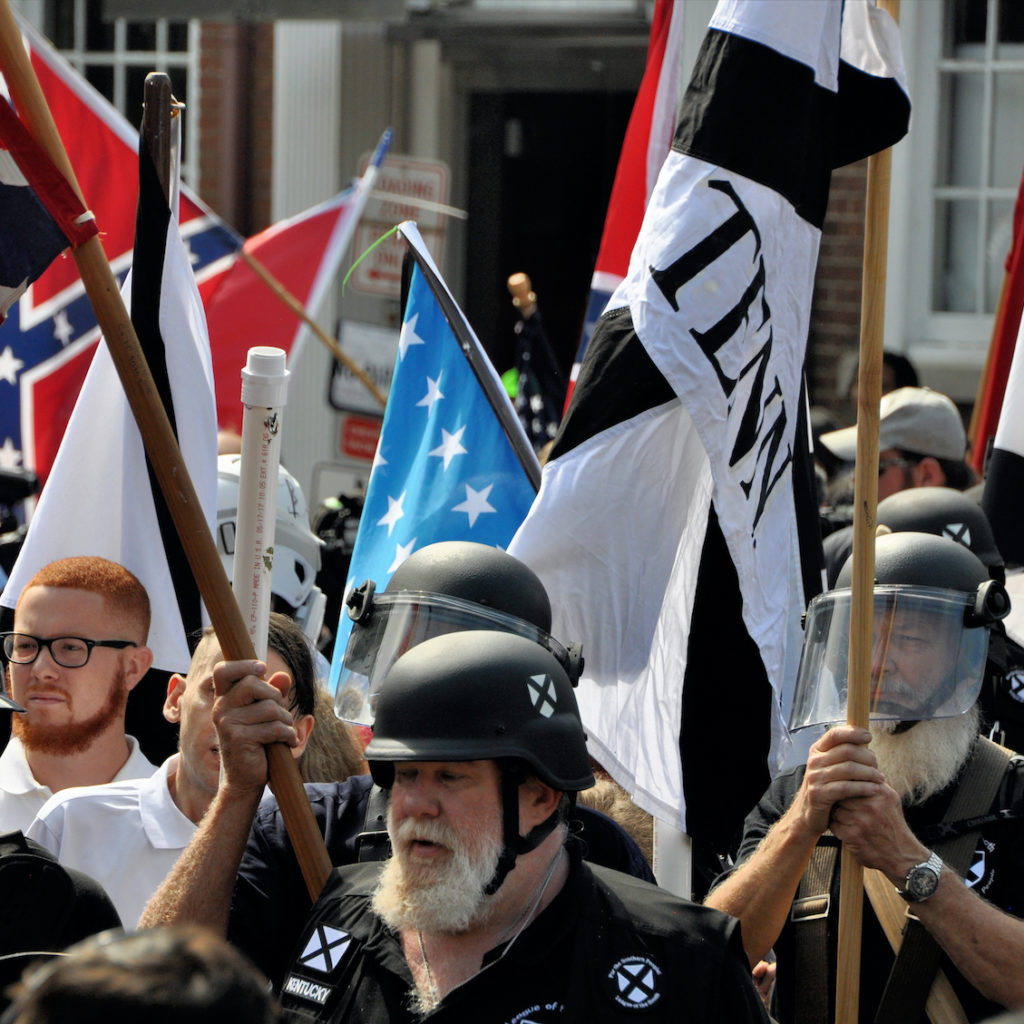 White nationalists and counter protesters clash in during a rally that turned violent resulting in the death of one and multiple injuries in Charlottesville, Virginia on August 12, 2017.

White nationalism is a term that originated among white supremacists as a euphemism for white supremacy. Eventually, some white supremacists tried to distinguish it further by using it to refer to a form of white supremacy that emphasizes defining a country or region by white racial identity and which seeks to promote the interests of whites exclusively, typically at the expense of people of other backgrounds.

According to an article published by The Economist, the phenomenon is hard to define because of its ideological and geographical fractiousness. Broadly, white nationalists want to achieve an ethno-state of, and for, whites. Some do their best to avoid overtly claiming that any race is inferior, arguing that each should have its own ethno-state.

The majority, however, are white supremacists, who also believe that races form a normative hierarchy with whiteness at the top. They demand policies ranging from stricter controls on immigration to wholesale ethnic cleansing, or even genocide. All this is often tied to the fear of ‘White Genocide’, or ‘White Replacement’, ie, the notion that the ‘white race’ is being squeezed out of existence through its own low birth rate, miscegenation and more prolific reproduction by non-white people.

White nationalists claim they seek to ensure the survival of the white race, and the cultures of historically white states. They hold that white people should maintain their majority in majority-white countries, maintain their political and economic dominance, and that their cultures should be foremost. Critics argue that the term ‘white nationalism’ is simply a rebranding and ideas such as white pride exist solely to provide a sanitized public face for white supremacy, and that most white nationalist groups promote racial violence.

Stating that increasing number of people are turning to nationalist, xenophobic, and ultra-conservative far-right movements and parties across Europe, Catarina Kinnvall wrote in an article that “Behind this seems to be a belief that such configurations will somehow solve their political, economic, cultural and ideological uncertainties by providing simplified solutions to complex questions. At the heart of these movements and parties lies a much more sinister form of emotional governance, however. A governance that cannot be separated from imperial pasts, fascist and anti-democratic ideas and values and which has as its foundation the preservation of whiteness as its key concern.”

“It is a nationalism not directed outwards towards other countries, but inwards towards national or EU establishments, towards feminists or proponents of multiculturalism, and towards migrants and minority populations,” stated Kinnvall and added that “Increasingly, and with severe consequences, migrants and minorities are portrayed as security risks – as dangerous beings who threaten national and cultural identity where, in particular, Muslim minority groups are depicted as ‘invaders’ of ‘foreign cultures’, praying to other gods and threatening the majority communities’ ways of life. It is within this context that the so-called ‘migration crisis’ has been used to substantiate a ‘race to the bottom’ by introducing strict border controls and citizenship rituals, thus justifying a dangerous illusion that ethnic diversity is a problem to be solved.”

Therefore, Kinnvall highlighted that whiteness promises a sense of unity, mastery, self-achievement, and absolute humanity. “It is a political ideology that has as its core myth the homogenous nation – a romanticized and gendered version of the homeland and homeland culture,” said the author and added that “This is where the politics of memory come in – especially as related to far-right populist and center-right movements – where collective emotions such as love for the nation, or hate, fear and contempt for the stranger other become central in the narrative construction of collective identities… The institutional and the emotional are here brought together through racist narratives of ‘imaginary protection’ from the immigrant ‘other’, often manifest in fetishism for ‘pure’ identities. In the hands of populist leaders, it is about channeling and governing emotions in its broadest sense for enclosing anxiety, defusing anger, relieving guilt and fulfilling illusory needs for pride, attachment and desire.”

Far-right populists respond to the logic of insecurity by providing a picture of the state (and the nation) as stable, uniform and strong, where those deemed not to belong are portrayed as enemies – as homogenous others, according to Kinnvall. She wrote “It is hence no coincidence that far right populist and some center-right parties and movements have both biological and cultural racism as a rhetorical source of their imaginary nations. Whiteness is not only the savior of an imperial past, but it is also closely related to a prevailing set of masculinity norms where heteronormative values often characterize the political rhetoric… ‘The boat is full’, ‘migrants are a threat to our culture’, become narrative shortcuts to a fantasy in which immigrants and minority communities are narrated as not being ‘proper’ nationals, as ‘stealing jobs’, as ‘bogus’ economic migrants, ‘criminal foreigners’ and ‘welfare parasites’.”

It is more than anything a white nationalism that is propagated, sold and provided as a remedy to an anxious European population in fear of an uncertain future, warned Kinnvall and suggested that “This is also why it is so important for centrist democratic parties in Europe to turn away from alliances with far-right fascist movements and provide alternative narratives of Europe, the EU and of diverse, heterogenous communities. To make democracy viable again, the myth of white nationalism must be dismantled and prevented from gaining power at any level of society.”

Lawrence Rosenthal also wrote in an article that white identity is the heart of white nationalists’ politics and their fundamental conviction is that contemporary America is being taken over by nonwhites. He said, neo-Nazis and KKK types have persisted in corners of the US since their last years of prominence in American politics, the 1920s and ’30s. With the Internet, they began to network as never before, overcoming their isolation. “But,” according to Rosenthal, “what seriously mobilized white nationalism in America and restored it as a potent force in national electoral politics, was Donald Trump’s presidential campaign. Suddenly, at the level of presidential politics, someone was talking the white nationalists’ language.”

He stated that Trump’s famous words from his first day’s announcement of his candidacy condemned Mexican immigrants without the slightest bow to the ‘political correctness’ of either the Democratic or Republican establishments: ‘They are bringing drugs. They’re bringing crime. They’re rapists.’ When Trump doubled down by promising to end Muslim immigration, he was speaking directly to white nationalists’ view of how to ‘Make America Great Again.’ The white nationalists were joined in their support for Trump’s campaign by the populist base of the Republican Party.