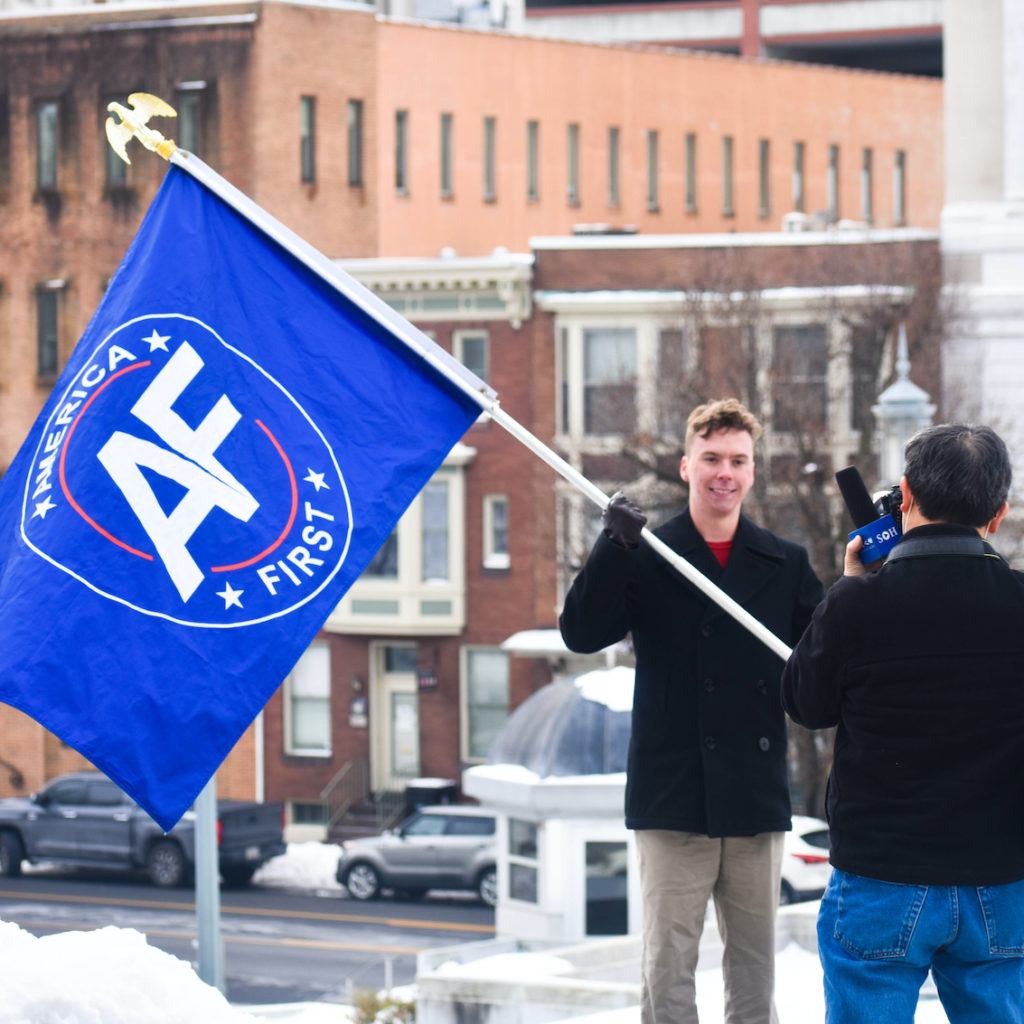 A Trump Supporter holds his "America First" flag for a photographer in Harrisburg, Pennsylvania, US on December 19, 2020.

Isolationism is a category of foreign policies institutionalized by leaders who assert that nations’ best interests are best served by keeping the affairs of other countries at a distance. One possible motivation for limiting international involvement is to avoid being drawn into dangerous and otherwise undesirable conflicts. There may also be a perceived benefit from avoiding international trade agreements or other mutual assistance pacts.

Isolationism has also been defined as a policy or doctrine of trying to isolate one’s country from the affairs of other nations by declining to enter into alliances, foreign economic commitments, international agreements, and generally attempting to make one’s economy entirely self-reliant; seeking to devote the entire efforts of one’s country to its own advancement, both diplomatically and economically, while remaining in a state of peace by avoiding foreign entanglements and responsibilities. According to an article by Pasha L. Hsieh, emerging populist isolationism has diverted the path of the neoliberal international economic order and cast doubt on the trade agreements.

Meanwhile, according to an article by Bennett L. Rudolph, the basic philosophic concept behind populist isolationism in the US is that the US would be doing fine if only foreigners and other evil, outside forces would leave us alone. “Populists believe this could be achieved by not participating in international politics and by closing the borders to foreign goods. Populists see that something is wrong with the economy, but instead of looking for real solutions, they blame ‘outsiders’ and ‘foreigners,’ who they believe are conspiring against them. The villains in this paranoid scenario differ, depending on the individual populist and the year, but they generally include the British royal family, big business, international bankers, the World Bank, the International Monetary Fund, Jews, African-Americans, and the Tri-Lateral Commission.”

Reminding that America has gone through populist isolationist periods several times in its history, Rudolph states that “the last round was sixty years ago, under the guidance of such people as Father Coughlin, Huey Long, Charles Lindbergh and Henry Ford. World War Two had many complex causes, but certainly American isolationism ranks high on the list.”

Trump’s synthesis of populist isolationism and nationalist triumphalism produces an erratic and unpredictable stance on America’s international role. The foreign policies of populist precedents provide clues as to how Trump thinks about the rest of the world, according to an article by Christopher Schaefer. He says that “in both style and substance, Donald Trump has strayed well beyond the boundaries that usually delimit Republican foreign policy and action. At times, he has broken the bi-partisan consensus on internationalism with isolationist-sounding remarks about putting America first, about making American allies pay their own way, and about being a neutral arbiter in the Israel-Palestine conflict.”

On the other hand, according to an article by Sreeram Chaulia, be it security, trade, climate change or balance of power in different regions of the world, ‘America First’ means a mixture of isolationism and transactionalism. He also wrote that “this fatal inward turn of US foreign policy executed by Donald Trump marks a sharp departure from previous US presidents since Franklin D. Roosevelt. They all believed in the vision of an ‘indispensable America’, hence also assuming the right to intervene globally in order to shape the international order. However, Trump has inverted the liberal internationalist principles which guided US presidents since World War II. He is confident in the knowledge that his populist isolationism resonates with an American public that is wary of foreign commitments.”

In his book, Chaulia states strongly that abandonment of international obligations and multilateralism has not upset Trump’s base in America… In a polarized political environment, Trump’s foreign policy of isolationism has a sizeable catchment area. As a populist, he cares much more for this grass-roots consent than the expert advice or pressure of the establishment. He says “whether Trump’ s coctail of populist isolationism and economic nationalism will irretrievably demolish the liberal international order and finish off American hegemony depends on domestic and international structural and relational factors that transcend his own personality and populist ideology. But it is undeniable that Trump, as a person, is playing the protagonist in the drama of a maturing post-American world. ”

Moreover, Thomas Costerg says in an article that “populism could spill over into geopolitics,” and adds that “the rise in nationalism, in particular of American isolationism, could threaten the global world order, increase global tensions and ultimately warrant higher risk premia for financial assets.” However, according to an article written by Stephan De Spiegeleire, Clarissa Skinner and Tim Sweijs, populist sovereignist parties are not illiberal per se, and they are not necessarily isolationist. Yet, their proposed reforms at times sit uncomfortably with the tenets of liberal democracy, in particular with regards to protections for minorities.

The authors also claim that populist sovereignist parties do not necessarily reject international engagement. “Participation in intergovernmental organizations is deemed to be acceptable so long as it serves the interests of the nation-state. Rather than being isolationist, populist sovereignist parties advocate strategies that cherry-pick international commitments that suit one’s purpose. This contrasts with the liberal commitment to multilateralism, based on the belief that international cooperation is beneficial to all participating parties, rather than a zero-sum game,” they say.