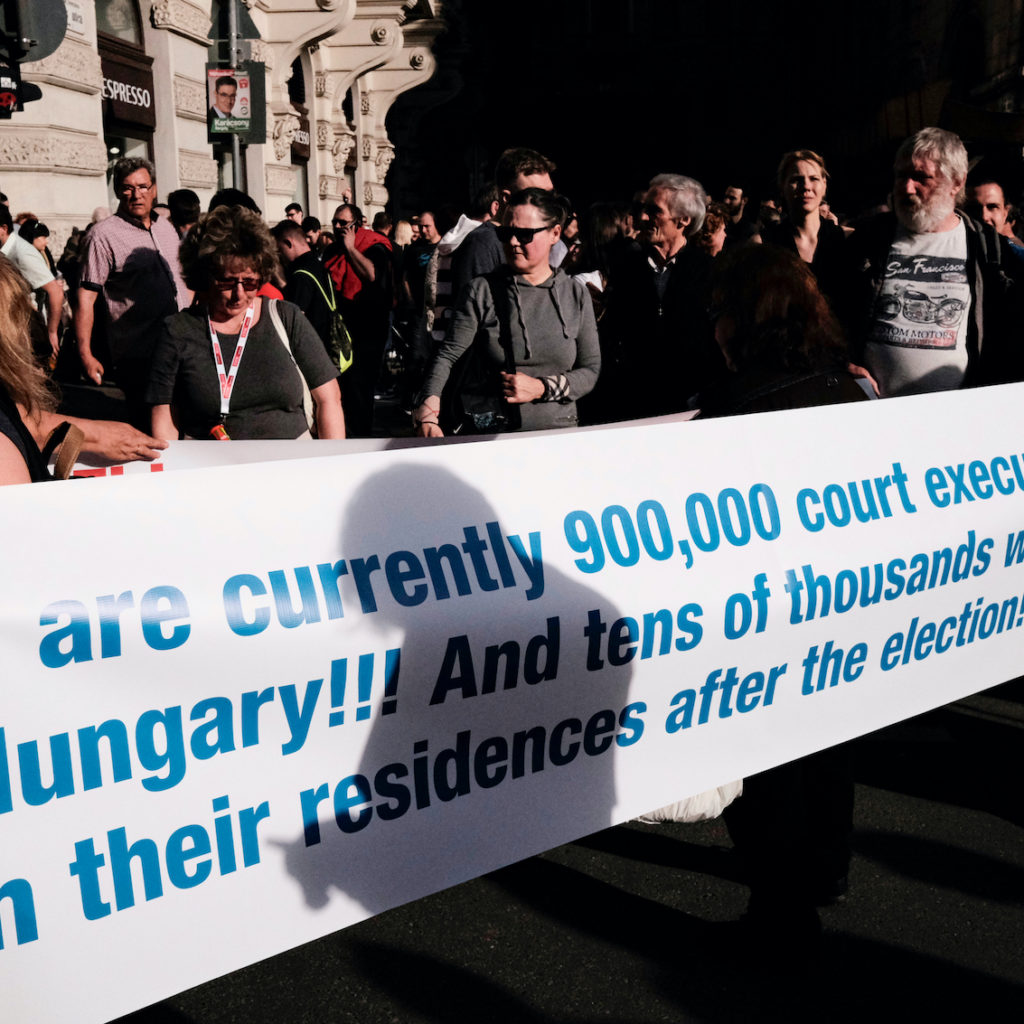 Rally organised against newly re-elected government of Fidesz Party Viktor Orbán in Budapest/Hungary on April 14, 2018. Orbán learned from his Turkish counterpart Erdogan how to capture the Constitutional Court and confuse critics by increasing the number of judges on the Constitutional Court while simultaneously expanding the Court’s jurisdiction to handle many more cases.

Legalism has different definitions in different disciplinary and historical context. In the context of Chinese philosophy, legalism is defined as a philosophical belief that human beings are more inclined to do wrong than right because they are motivated entirely by self-interest. Even though Legalism during the Qin Dynasty resulted in huge loss of life and culture, it should be remembered that the philosophy developed during a time of constant warfare in China when each state fought every other for control.

Other sources claim that legalism or Fajia is one of Sima Tan’s six classical schools of thought. Literally meaning “house of administrative methods” or “standards/law” the “school” represents several branches of what have been termed realist statesmen, or “men of methods” who played foundational roles in the construction of the bureaucratic Chinese empire.

According to Christianity, legalism exists when people attempt to secure righteousness in God’s sight by good works. Legalists believe that they can earn or merit God’s approval by performing the requirements of the law. Like the term Trinity, the word legalism is not used in the Bible, but instead describes principles clearly outlined in the Bible. At the heart of the legalism versus grace debate is understanding how people are saved and how people can have an assurance of their heavenly hope. A legalist believes that their good works and obedience to God affects their salvation.

However, in the Western world, legalism has often been compared to Machiavellianism, and considered akin to an ancient Chinese philosophy of realpolitik. The legalists emphasized a realist project of consolidating the wealth and power of the state and its autocrat, with the goal of achieving order, security and stability. With their close connections to the other schools, some legalists would go on to be a major influence on Taoism and Confucianism, and the current remains highly influential in administration, policy and legal practice in China today.

When we discuss legalism in the context of populism and law, it means a bit different. According to an article by Chris Hilson in Research Handbook on Law and Courts, populist legalism is in part a descriptive notion which can be tested empirically. In this sense, to him, climate change litigation cases can be described as examples of populist legalism and some cannot. He wrote “both populist legalism and legal populism also have a normative component, inviting a strategic choice by social movement actors on the extent to which they wish to employ populist elements in their litigation proceedings.”

Dima reminds us that populist leaders are not at odds with democracy itself, rather with liberal democracy, especially with its specific feature of pluralism and urges “Basically, populist leaders become legalistic autocrats, seeking to use their democratic mandates to launch constitutional and legal reforms that remove the checks on executive power and parliamentary majorities, and limit possible challenges to their rule. Thus, they undermine the very essence of liberal constitutionalism, which was always to prevent the tyranny of the majority. The present analysis focuses on certain countries in Central and Eastern Europe, offering some general examples of what the constitutional and legal reforms by populists in power from Hungary, Poland and Turkey look like.”

“Populists’ favorite first victims are constitutional justice and the judiciary power,” says Dima and adds “For example, populists in power limit the prerogatives of the constitutional courts and change the appointment procedures and selection criteria for constitutional judges in order to diminish the role and the independence of these fundamental institutions (Hungary and Poland).”

“Sometimes, autocratic legalists scan the horizon for the worst practices from good states and adopt them,” says Kim Lane Scheppele and writes in an article that “Because the practices are from good states, autocrats can claim double standards if they are criticized. Practices like gerrymandering, proroguing parliaments, engaging in indiscriminate surveillance of populations and entrusting judicial appointments to political officials create worries in good states but can kill off constitutionalism in autocratic states.”

To Scheppele, Hungary, Russia, Venezuela, Turkey and Poland provide the leading cautionary examples of autocratic legalism. In these states, Viktor Orbán, Vladimir Putin, Hugo Chávez, Recep Tayyip Erdogan and Jaroslav Kaczynski came to power through elections and then used fundamental legal change to entrench themselves. Scheppele also states that Hungarian Prime Minister Orbán learned from his Turkish counterpart Erdogan how to capture the Constitutional Court and confuse critics by increasing the number of judges on the Constitutional Court while simultaneously expanding the Court’s jurisdiction to handle many more (politically insignificant) cases. Adding more judges to a court could be viewed as supporting it (by enabling the court to handle the heavier caseload) or as destroying it (through court packing).

“In both Turkey and Hungary, expanding the jurisdiction of the court served as cover for adding to the court judges who then approved all of the government’s later consolidations of power. After Orbán neutralized the Hungarian Constitutional Court, he then captured the ordinary judiciary by lowering the judicial retirement age, removing most of the court leaders in a civil service judiciary in which the oldest judges held the most crucial positions and replacing them with judges more to his liking,” she reminds.

Scheppele asserts that autocratic legalism occurs not because citizens fail but because elites do: “When autocratic leaders win elections, it is often because voters were removing prior corrupt elites in a context when voters had few reasonable choices. The new autocrats emerged as candidates as the result of conflicts between old elites or breakdowns in party systems. Traditional parties have been losing support and the elites who once ran them fail to agree on solutions because a momentous political shift is occurring in which the left/right political spectrum is being replaced by a global/local political spectrum.”