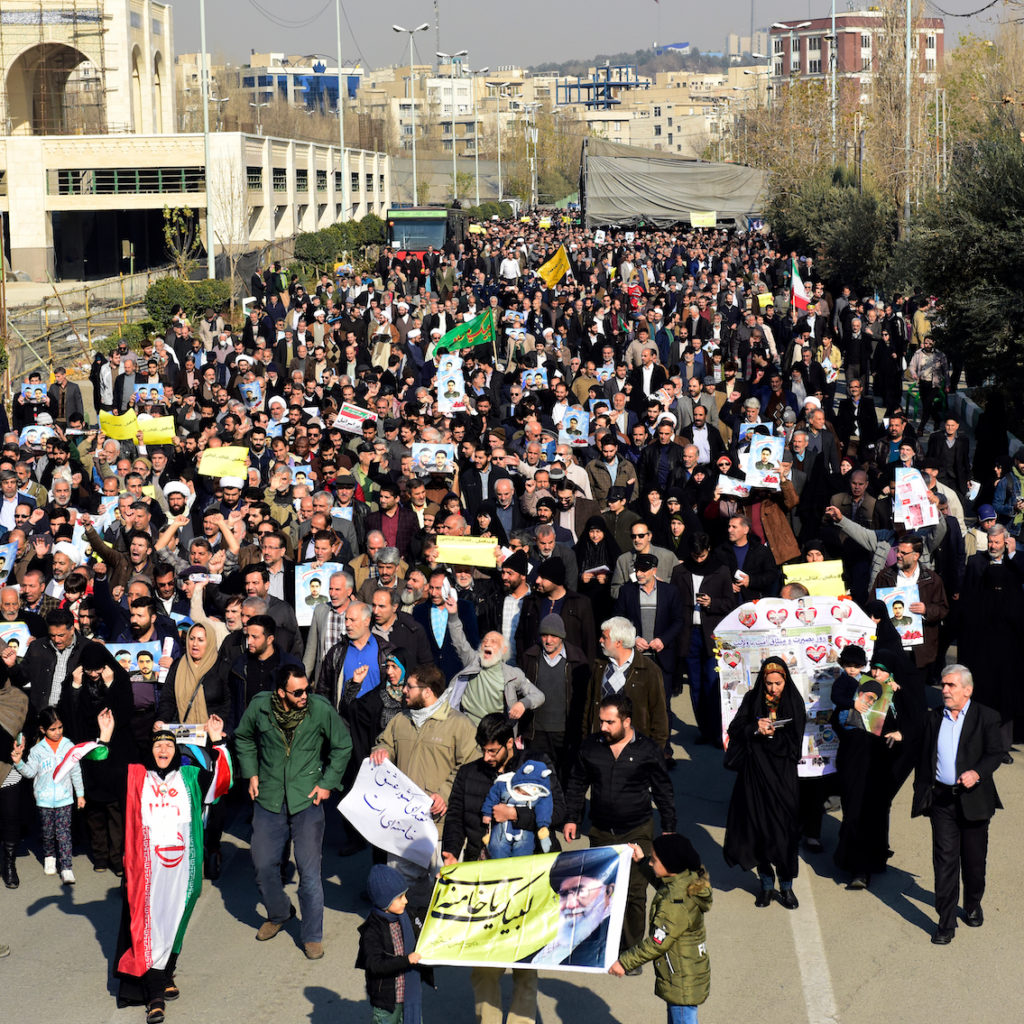 Pro-government demonstrators march in support of the regime after the weekly Friday Prayers on January 05, 2018 in Tehran.

Populism as an ideology and movement has had different forms and manifestations in different parts of the world. For instance Iran expert Ervand Abrahamian describes post-revolutionary Iran theocracy as ‘Third World Populism’. However, in an article, Pranab Bardhan underlines numbers of severe differences between populism in developed world and developing countries.

Meanwhile, according to a book written by Peter Worsley, modern Afro-Asian populism is essentially a response to the challenge of industrialism on the part of small producers, normally agricultural producers, who seek to preserve themselves against the inroads of capitalism, on the one hand, and the challenge from communism on the other. “It is, then, an alternative philosophy of, and strategy for development, not simply a backwards-looking nostalgia. As such, it is an activist creed, which places great emphasis upon popular participation and upon forms of organization that transcend pure individualism but stop well short of centralized collectivism,” he wrote.

Populism and the ‘Third World’ are not co-extensive, according to Worsley, except at the level of aspiration towards non-communist, non-capitalist development. He said, “those states which have actually institutionalized elements of populism in their internal policies, or which have talked about so doing, like Sukarno’s Indonesia, Mali, Algeria, and Tanzania, have constituted an influential grouping within the non-aligned bloc, and have thereby injected their ideas and values into the thinking of the Bandung (Non-Alignment Movement – NAM) countries. But in reality, few of the Third World states have seriously put populist notions into operation internally. Rather more have talked populism, but only a few experimented with communitarian agriculture and participatory ‘self-help’ schemes.”

Political parties in the Third World are also frequently populist, according to a book written by Brian Clive Smith. He wrote that this is a style of leadership rather than an ideology. It seeks to mobilize people regardless of class by denying the significance of class and of any class-based ideology. “Populism tries to mobilize all interests under a single conception of the national interest. It rejects the idea that groups have irreconcilable interests,” said Smith and added that “Political leaders such as Sekou Toure of Guinea claimed that though their societies might be divided into occupational, age and other groups, all shared a common interest represented by a particular party and its leadership. Society is presented as ‘cellularized’ into factions whose common interests out-weight their particular and possibly conflicting interests as illiterates or intellectuals, young or old, producers or consumers, men or women, peasants or urbanites, bureaucrats or clients.”

On the other hand, according to Bardhan, developing countries usually lobby for the relaxation of immigration restrictions in rich countries. But even in the latter countries the issue raises its ugly head from time to time — witness the tension right now in Assam in northeast India where a right-wing government is trying to disenfranchise supposedly illegal Muslim immigrants from Bangladesh and around the more well-known case of the Rohingyas in Myanmar. Some excerpts from Bardhan’s article are as follows:

“Populist support in rich countries is stronger among the older, less-educated, blue-collar workers, and more in the rural backwaters than in the prosperous cities… The picture is somewhat different in developing countries. Many of the supporters of the populist leaders in India or Turkey are from the rising middle classes, from the aspirational youth, and at least as much from urban areas as from rural. In India, Pakistan, Indonesia, Turkey, Poland or Russia symbols of illiberal religious resurgence have been used by the leaders to energize the upwardly-mobile or arriviste social groups.

“Also, in developing countries the informal sector is often very large, and so massive numbers of workers there remain outside the pale of traditional trade union or class politics and the discipline labor organizations have historically exercised in taming nativist passions. These unorganized workers are thus more easily subject to the ethnic or sectarian fury whipped up by demagogues. In fact, in many poor countries the unionized public sector employees in the delivery of public services have often been callous, corrupt or truant, and so they currently do not have a good image with the poor recipients of such services. Religious or sectarian organizations which often step in to supplement these services are more popular. Moreover, beyond welfare policies, both left and right-wing parties in poor countries favor economic populism that takes the form of various government subsidies and handouts.

“Another likely short-lived phenomenon in the poor countries may be their generally pro-globalization attitude. Their main source of comparative advantage in world trade is based on low labor cost… However, without large effective programs of skill formation and vocational training the political consequences for poor countries with masses of young people frustrated in their job prospects, as the traditional sectors like agriculture where they and their parents had been employed before decline, can be downright ominous. This may in time provide more fuel and storm-troopers for the populist demagogues.”