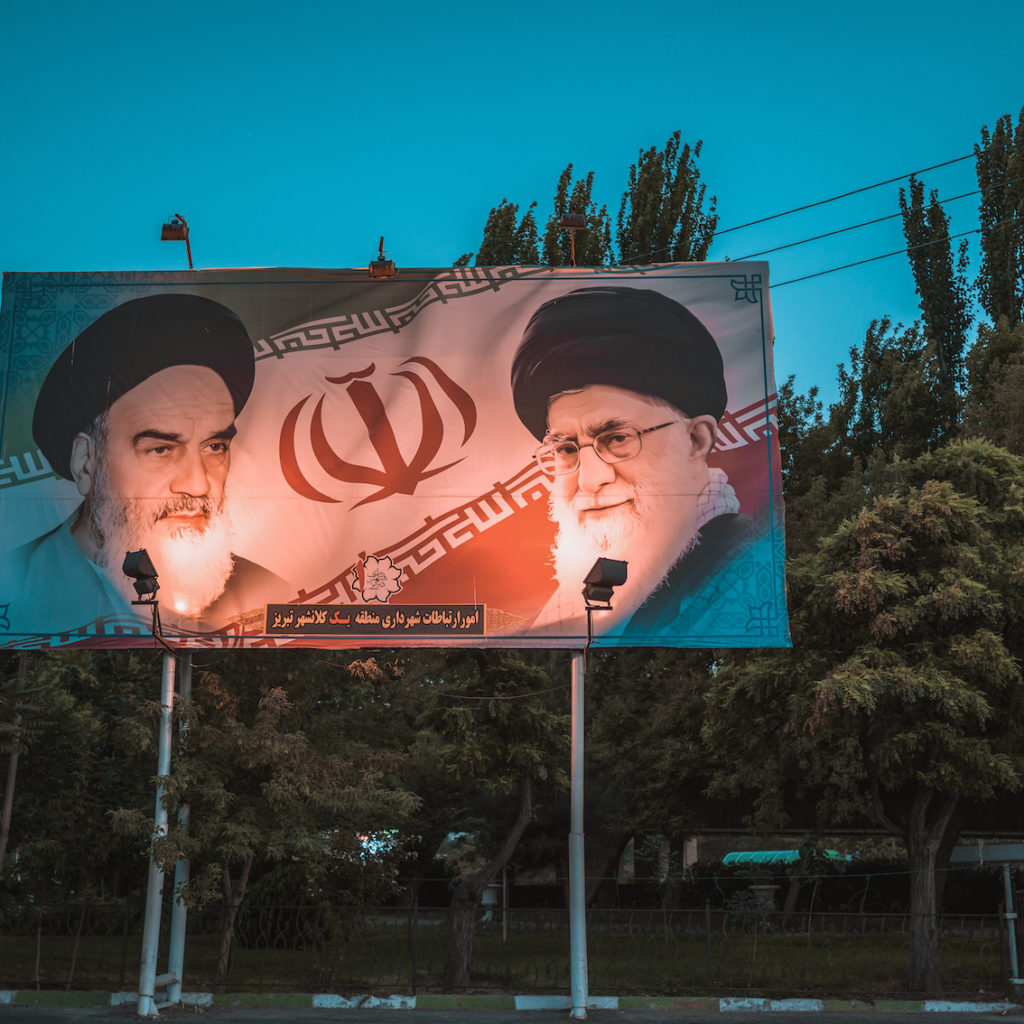 Ruhollah Khomeini and Ayatollah Ali Hamaney on billboard in Tabriz, Iran on August 11, 2019.

Theocracy is a form of government in which God or a deity of some type is recognized as the supreme ruling authority, giving divine guidance to human intermediaries that manage the day to day affairs of the government.

Populism cuts across ideological distinctions because of its ‘transversal political logic’ centered on the principle of ‘popular sovereignty’. However, this notion does not apply to the numerous forms of theocratic populism found around the world today. For theocrats, sovereignty resides with God, not with the people, according to an article by anthropologist John Postill. This strain of neoconservative populism has been on the rise globally since the 1970s, especially in the Muslim world and also in Christian-majority countries across Africa and the Americas (where neo-Pentecostalism has flourished), as well as among Hindus in India and Buddhists in Burma, for instance.

Postill says that “a clear exponent of theocratic populism from the global Southwest is the new mayor of Rio de Janeiro, Marcelo Crivella of the Brazilian Republican Party.” Crivella is a bishop of the Universal Church or UCKG, the largest neo-Pentecostal church in Brazil, founded in the late 1970s by Crivella’s uncle, the media tycoon Edir Macedo. Crivella’s support base came from the poorer neighborhoods of Rio where evangelical churches have made major inroads in recent decades. His voters’ convictions were ‘colored by paranoia and post-factual Internet propaganda’. More recently, the evangelical churches have also played a crucial role in the election of the right-wing populist Jair Bolsonaro to the presidency of Brazil.

“Approached from a religious vantage point, populism list stands out: the principle of popular sovereignty and the invocation of a heartland. First, while theocratic populists vary widely cross-culturally, most of them stress the sovereignty of God, not of the people. For example, the Iranian revolution of 1979, technologically supported by cassette tapes, leaflets and other ‘social media’ of that age was driven by Shi’a populism,” writes Postill.

Meanwhile, Kambiz Afrachteh says in an article that theocratic populism in Iran corresponds closely to the Latin American movements in its urban character and with populism in general in terms of its xenophobia, its ‘worship’ of the people, and its manipulative aspect. “However, while the stated intention of the theocratic leadership is to elevate the social position of the disinherited, the ‘worship’ of the people has a particular Shi’i twist that serves to reinforce the leadership position of the clergy within the movement. Sovereignty, it is claimed, resides exclusively in God, and, by extension, in his temporal deputies: to wit, the ulama,” writes Afrachteh.

The Imam is projected as the personification of a vaguely defined notion of popular will. Thus, the term ‘theocratic populism’ aptly describes the clergy-led, urban, mass movement that has emerged predominant in the politics of Iran after the revolution in 1979. “The use of the adjective ‘theocratic’ is based on the fact that the movement has been nourished and given its cohesion by Islam qua political ideology,” according to Afrachteh.

He argues that Khomeini is quite simply a populist politician in the Iranian tradition and appeals to his constituency on an emotional rather than an intellectual level. “He is no less than obliged to resort to highly emotive policies, which serve to galvanize public support. It is against this very ‘rational’ background that the hostage crisis, the Gulf war, and the persistent bullying of the secular forces must be viewed. It is hard to conceive how else Khomeini could have managed to ride roughshod over the burgeoning opposition to theocratic hegemony,” writes Afrachteh.

Populism is a non-class structure with a charismatic leadership. It is a political, ideological and centralized radical mass movement. Ideologically it represents the declining traditional middle class. A populist movement occurs when a society enters a structural crisis of transition from an agrarian system to capitalism. According to an article by Kazem Alamdari, contemporary Iranian history is marked with these characteristics. He tells the story of Iran’s theocratic populism as follows:

“The land reform programme of 1961 and the shah’s modernization project aimed to replace the agrarian economy with capitalist relations and the neutralizing of any revolutionary motives on the part of the peasants. However, it resulted in a ‘peasantisation’ of the cities, cultural and economic conflict, unregulated social mobility, and stratification, which set the stage for Khomeini’s revolutionary populism. In a religious culture like that of Iran, and in the absence of political parties, when the shah lost his firm grip on his regime a charismatic leader who proclaimed himself God’s representative on earth and the people’s savior easily manipulated the uneducated masses, who had no political experience. Khomeini’s populist slogans were altogether directed against one figure, the shah. However, after the victory of the revolution, relying on his new populist base, Khomeini viciously excluded all his rivals and political opponents.

“Populist Islamic rule, which is incompatible with the trend of modernization and democratization, pushed society into a permanent revolution, involving traditional authority, Islamization of the social fabric and fragmentation of political desires. Had the war with Iraq (1981-88) not occurred, populism could have ended more quickly after the revolution, and society would have begun its routine activities. The war, however, empowered the populist Islamist authority to mobilize the ideologically ill-treated masses and to suppress political opponents under the emotional context of defending ‘the land of Islam’.”

Ervand Abrahamian, whoargues against the general identification of the post-revolutionary hierocracy in Iran as fundamentalist, writes in favor of Third World Populism as a more adequate description of the post-revolutionary hierocracy in Iran. However, Abrahamian’s arguments in some of his criticism of the way scholars in the West have identified the theocracy in Iran seems justified, rejecting fundamentalism and replacing it with populism seems to lack argumentative support. According to Abrahamian, in the dualistic and black and white worldview that constitutes the official ideology of the theocracy in Iran, there is simply one correct version of Islam, the government’s version. Hence plenty of classic works in theology are being reprinted, but if and only if they do pass the state’s requirements of right and wrong.

Postill says in another article that the Indonesian example brings us nicely to another important expression of populism. In Indonesia, the key struggle today is not between leftist and rightist forms of populism, but rather between technocratic (centrist) and theocratic (rightist) populism. Thus, on 4 September 2016, a mass demonstration was held in central Jakarta against the incumbent governor, known as ‘Ahok’, who is an ethnic Chinese Christian. Ahok is a technocrat and a close ally of President Jokowi.

The Islamic Defenders Front (FPI) and other hardline Muslim organizations, including Hizb ut-Tahrir, exhorted all Muslims not to allow a non-believer, a kafir, to govern them. To drive home their argument, they cited a verse in the Qur’an warning Muslims against making alliances with Jews and Christians. After 3 weeks, Ahok made the mistake of mentioning the Qur’an during an official speech, pointing out that Muslims had been lied to about not being allowed to vote for a non-Muslim. Although he apologized for unintentionally causing offence, a doctored version of his comments was widely shared on social media, rendering his comments more offensive, which further angered large swathes of the Muslim population. In May 2017, he was found guilty of blasphemy and is currently serving a 2-year prison sentence.