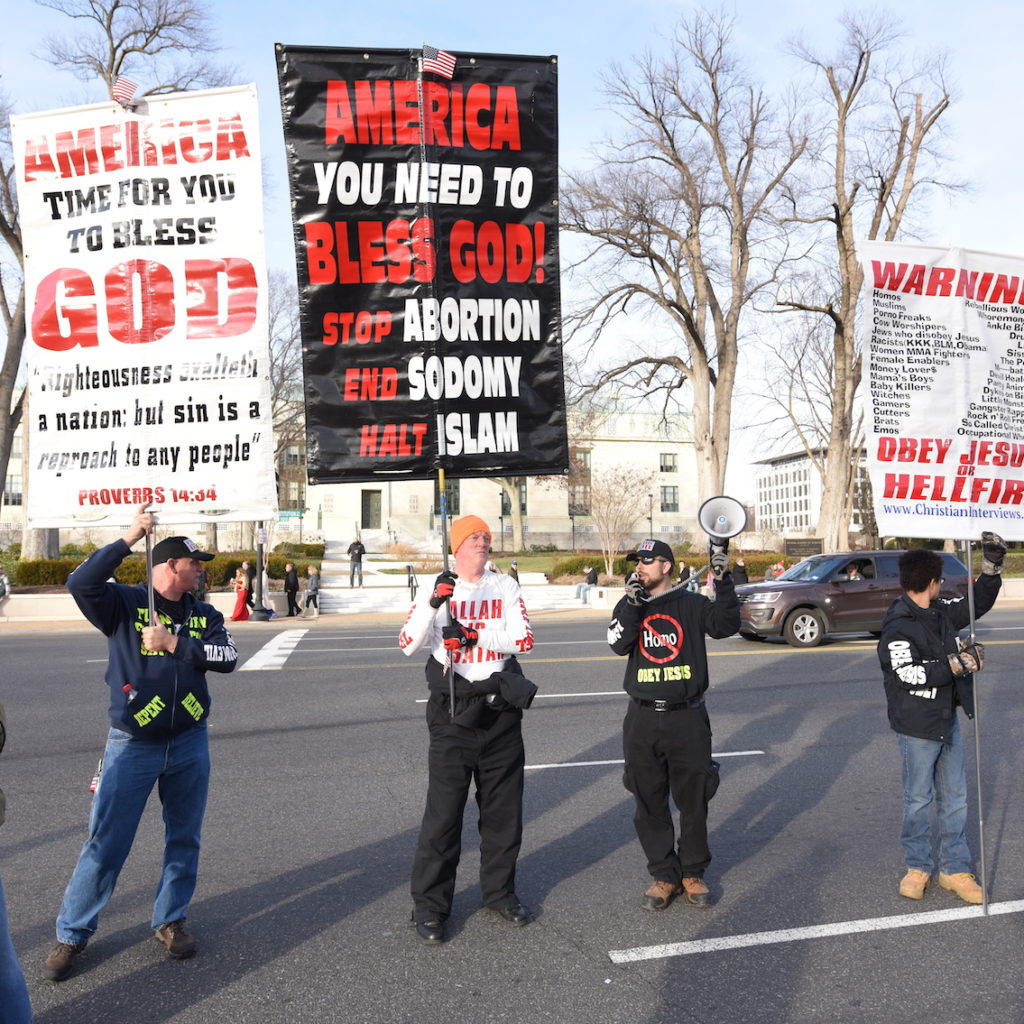 Pro-Trump & anti-Trump forces gather in Washington DC for the next day's inauguration. Fundamentalist Christians picket outside Lincoln Memorial on January 19, 2017.

Conservatism is a political and social philosophy promoting traditional social institutions in the context of culture and civilization. The central tenets of conservatism include tradition, organic society, hierarchy, authority, and property rights. Conservatives seek to preserve a range of institutions such as religion, parliamentary government, and property rights, with the aim of emphasizing social stability and continuity. The more traditional elements—reactionaries—oppose modernism and seek a return to ‘the way things were’.

The first established use of the term in a political context originated in 1818 with François-René de Chateaubriand during the period of Bourbon Restoration that sought to roll back the policies of the French Revolution. Historically associated with right-wing politics, the term has since been used to describe a wide range of views. There is no single set of policies regarded as conservative because the meaning of conservatism depends on what is considered traditional in a given place and time. Thus, conservatives from different parts of the world—each upholding their respective traditions—may disagree on a wide range of issues. Edmund Burke, an 18th-century politician who opposed the French Revolution, but supported the American Revolution, is credited as one of the main theorists of conservatism in Great Britain in the 1790s.

According to an article by Colin Dueck, the rise of a conservative-leaning populist nationalism throughout much of the Western world in recent years has garnered tremendous attention. The best evidence located by scholars such as Ronald Inglehart and Pippa Norris indicates that those voters most drawn to populist-nationalist parties and candidates on both sides of the Atlantic are indeed concerned by issues of economic inequality and globalization. At the same time, according to them, an even greater motivation for voters drawn to populist-nationalist candidates, parties and movements is a sense of cultural upheaval. The very same rise of post-materialist cosmopolitan, multicultural issues and values that inspire liberals has also triggered a culturally conservative reaction from those segments of the public unpersuaded by the benefit of such changes.

As cosmopolitan liberals embrace progressive values, populist nationalists embrace traditional values. As an example, one striking feature of Donald Trump’s 2016 presidential campaign was the way in which it rallied culturally conservative voters against cosmopolitan elites in both parties. Dueck highlights the fact that over the past seventy years, the Republican Party has become a more populist party by realigning itself in a conservative direction on social and cultural issues. According to him, Theodore Roosevelt straddled the divide between conservatives and populist progressives within the GOP, while trending toward the latter –especially after leaving office; Richard Nixon aimed at a new Republican majority with a conservative populist platform; Another very large cluster of downscale Republican voters are suspicious of national elites, center-left on economics, less internationalist, often culturally conservative, protectionist-leaning, and anti-immigration. These were the voters most likely to rally around Trump early on.

Dueck draws also attention to the fact that some of the voters most likely to shift from Obama 2012 to Trump 2016 — and to vote for Trump in the GOP primary that year — were white working-class, non-college educated voters in Rust Belt small-town counties. These voters tend to be center-left on economics but conservative on cultural issues: the classic populist position. Moreover, the specific version of cultural conservatism endorsed by a plurality of voters in the 2016 Republican primaries was hardly a pious religiosity, but instead a rightward-leaning populist nationalism focused on questions of immigration, trade, criminal policing, citizenship, and national identity.

Meanwhile, according to an article by Peter Berkowitz, of all the strange and remarkable features of politics in the Trump era, among the least surprising is the alliance between conservatism and populism. “Trump’s emergence as the tribune of conservative hopes and popular anxieties was improbable. But he didn’t invent the alliance between conservatism and populism. He rode the wave of a populist revolt sweeping across the Western world,” says Berkowitz.