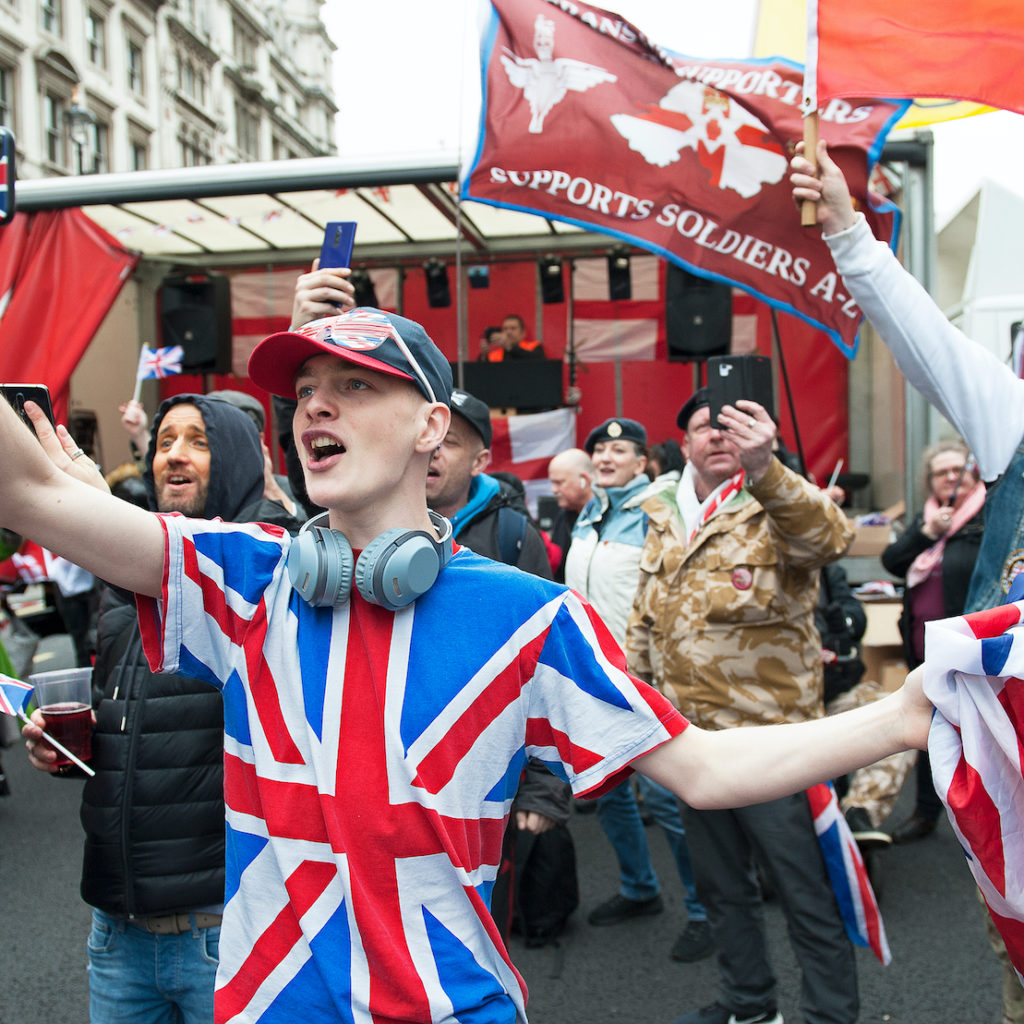 A Brexit Day 'Independence' parade was held at Whitehall and on Parliament Square in London to celebrate the UK leaving the European Union on January 31, 2020.

Nationalism is an ideology and movement that promotes the interests of a particular nation especially with the aim of gaining and maintaining the nation’s sovereignty over its homeland. Nationalism holds that each nation should govern itself, free from outside interference (self-determination), that a nation is a natural and ideal basis for a polity, and that the nation is the only rightful source of political power.

It further aims to build and maintain a single national identity based on shared social characteristics such as culture, language, religion, politics, and belief in a shared singular history and to promote national unity or solidarity. Nationalism, therefore, seeks to preserve and foster a nation’s traditional culture, and cultural revivals have been associated with nationalist movements. It also encourages pride in national achievements and is closely linked to patriotism. Nationalism is often combined with other ideologies, such as conservatism (national conservatism) or socialism (socialist nationalism).

Throughout history, people have had an attachment to their kin group and traditions, to territorial authorities and to their homeland, but nationalism did not become a widely recognized concept until the 18th century. There are three paradigms for understanding the origins and basis of nationalism. Primordialism (perennialism) proposes that there have always been nations and that nationalism is a natural phenomenon. Ethnosymbolism explains nationalism as a dynamic, evolutionary phenomenon and stresses the importance of symbols, myths and traditions in the development of nations and nationalism. Modernism proposes that nationalism is a recent social phenomenon that needs the socio-economic structures of modern society to exist.

“More recently, there has been a revival of populist nationalism in the UK. As the memories of the slaughters in the world wars and the fall of the empire faded, the experience of membership in the European Community paradoxically revived English nationalism even as the Scots and the Welsh renewed their own sense of a national identity based on non-rational, traditional sources,” according to a book written by Walter Russell Mead.

Meanwhile, Francis Fukuyama asserted in an article that the world experienced a political earthquake in the year 2016 with the British vote to leave the EU in June and the election of Donald Trump as President of the US in November. These events were the culmination of a longer-term trend away from the postwar liberal international order, one that had been building for at least a decade earlier and marked the rise of a new form of populist nationalism. For those who believe that liberal democracy constitutes the best form of government, the rise of populist nationalism is a very worrying phenomenon. The last time this happened in the 1930s, the Great Depression was deepened and prolonged by punitive tariffs and competitive devaluations, while Europe eventually plunged into World War II.

Richard Higgo and Virginia Proud wrote in an article that especially since the global financial crisis of 2008 that has seen a rise of nationalist populism as a political phenome in the US, Asia and Europe. According to the article, the rise of populism is neither consistent, nor uniform, and its growth and influence should not be overstated. However, populism exacerbates nationalism in international relations, presenting major challenges for liberal democratic states. “At the national level it places strains on the social bond between citizens and the state and at the international level, as is widely understood, it is testing the continued viability of the liberal international order which has prevailed for the 70 or so years since the end of the Second World War. The xenophobic attitudes are also shining through in populist and nationalist movement’s behavior, especially issues of cultural identity and immigration,” the authors said.

Meanwhile, Cathrine Thorleifsson urged in an article that the rise and appeal of populist nationalism must be analyzed in relation to the increasing economic, culture and political competition linked to globalization. “These affect countries and regions unevenly. But in all, the insecurities and societal ruptures associated with rapid, accelerated change have enabled the heating of populist nationalisms in local struggles over resources and recognition,” she continued.

“While the local material and cultural specificities for the heating of populist nationalism might be very local, there are clear common themes that emerge in their proposed solutions,” said Thorleifsson and added that “the populist nationalists offer economic and cultural protectionism against ideas, forces and people considered threatening to an imagined ‘us’. The parties claim to provide better futures modelled around a romanticized past and ‘good old days.’ They pledge to reinforce territorial boundaries, to stand up for morally virtuous ‘little people’ against the elites, and to protect them against others often defined in religious or racial terms.”

To Thorleifsson, while the populist nationalist parties vary in legacy, ideology and orientation, they converge in their grammars of exclusion. “The stylistic repertoire of radical right parties, as expressed both online and offline, continue to use age-old rhetoric and social imaginaries of ethno-religious difference. Historically, Jews and Roma have faced racist tropes and persecution. In present day Europe, the figure of the migrant Muslim stranger is used in political mobilization. The grievances that have enabled the rise of populist nationalism – a sense of cultural dislocation and feelings of relative economic deprivation are likely to persist,” she said and continued: “The increased salience of accelerated migration, the growing public anxiety over the role and perceived integration of Muslim communities, and dissatisfaction with the mainstream parties and European institutions will continue to cultivate opportunities for the populist radical right.”

How should we analyze the connections between populism and nationalism: A response to Rogers Brubaker — De Cleen, Benjamin; Stavrakakis, Yannis; Nations and Nationalism, April 2020, Vol.26(2), pp.314-322.

‘Populism and nationalism in a comparative perspective: a scholarly exchange,’ with B Bonikowski, D Halikiopoulou, E Kaufmann, M Rooduijn, Nations and Nationalism 25 (1) 2019, 58-81.