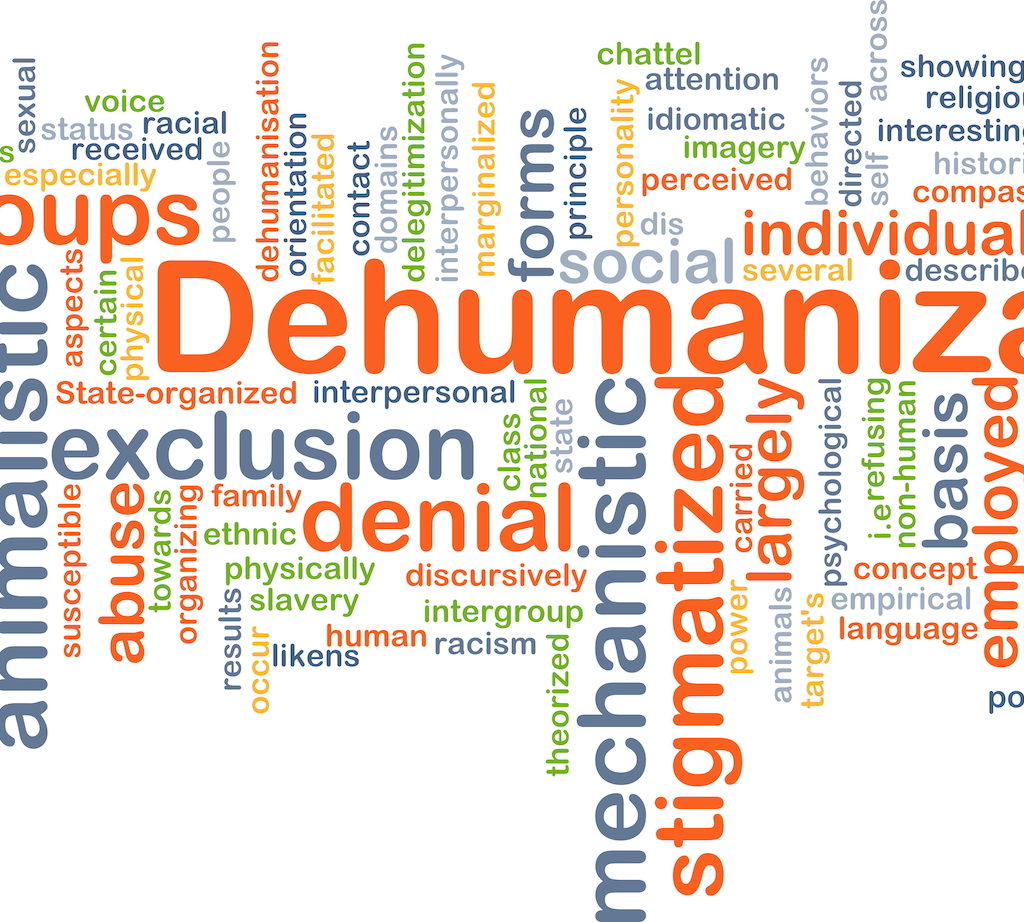 Dehumanization is the act of denying humanness to other human beings. A practical definition refers to it as the viewing and treatment of other persons as if they lack mental capacities that we enjoy as human beings. Here, every act or thought that treats a person as less than human is an act of dehumanization. Throughout history, dehumanization has been an essential ingredient in the perpetration of intergroup violence and atrocities.

In political science and jurisprudence, the act of dehumanization is the inferential alienation of human rights or denaturalization of natural rights, a definition contingent upon presiding international law rather than social norms limited by human geography. In this context, specialty within species need not apply to constitute global citizenship or its inalienable rights; these both are inherit by human genome. It is theorized to take on two forms: animalistic dehumanization, which is employed on a largely intergroup basis, and mechanistic dehumanization, which is employed on a largely interpersonal basis.

“When you see the president or other politicians use terms like ‘animals’ or, even worse, ‘infestation’ (a term usually reserved for insects), they are engaging in dehumanization. People use dehumanization to justify greed, violence, and abuse. Although dehumanization is most associated with right-wing nationalism, others sometimes use dehumanizing language, too,” says Sherry Hamby.

According to her article, dehumanization involves redefining the targets of prejudice and violence by making them seem less human (that is, less civilized or less sentient) than other people. The classic strategy for this is to use terms like ‘animals’ and ‘vermin.’ Referring to people as “illegals” is also dehumanizing. You’ll see dehumanization at work in most large-scale atrocities or genocides committed by governments, armies, or terrorists. The main purpose is to get people to accept or even engage in behaviors that they know are wrong.

Meanwhile, Joanna Hellström stated in an article that social science scholars mainly regard dehumanization as a phenomenon of conflict and war. Given the rise of right-wing populism and populist rhetoric, there is reason to believe that dehumanization has nestled its way into political discourse… “Dehumanization can lead to support for aggression, discrimination, and violence even in democratic societies. Therefore, it is essential for political scientists to acknowledge its existence, as dehumanization can have a severe impact on equality and the defense of human rights. Since dehumanization is based on making generalizations of other groups, especially those who have been traditionally discriminated against, it can also be a convenient tool for radical right-wing parties,” she notes.

Furthermore, Adama Dieng, UN Special Adviser on the Prevention of Genocide, wrote in an article that the demonization of immigrants by politicians, and some sections of the public, has neither attracted widespread outrage nor condemnation. Instead, politicians seem to exacerbate such attacks with sanctimoniousness and hateful rhetoric. All over Europe, ultranationalist resurgence is legitimizing hatred, racism and violence.

“While extremists spread inflammatory language in mainstream political discourse under the guise of ‘populism’, hate crimes and hate speech continue to rise. Hate crimes constitute one of the clearest early-warning signs for atrocity crimes. Therefore, they must not remain unchallenged,” says Dieng and adds that “Dehumanization of immigrants and refugees, as we are seeing throughout Europe, takes away the humanity that justifies universal protection of their rights. Ultranationalist leaders legitimize the violence of their supporters by framing immigrants as a threat to their culture and identity.”