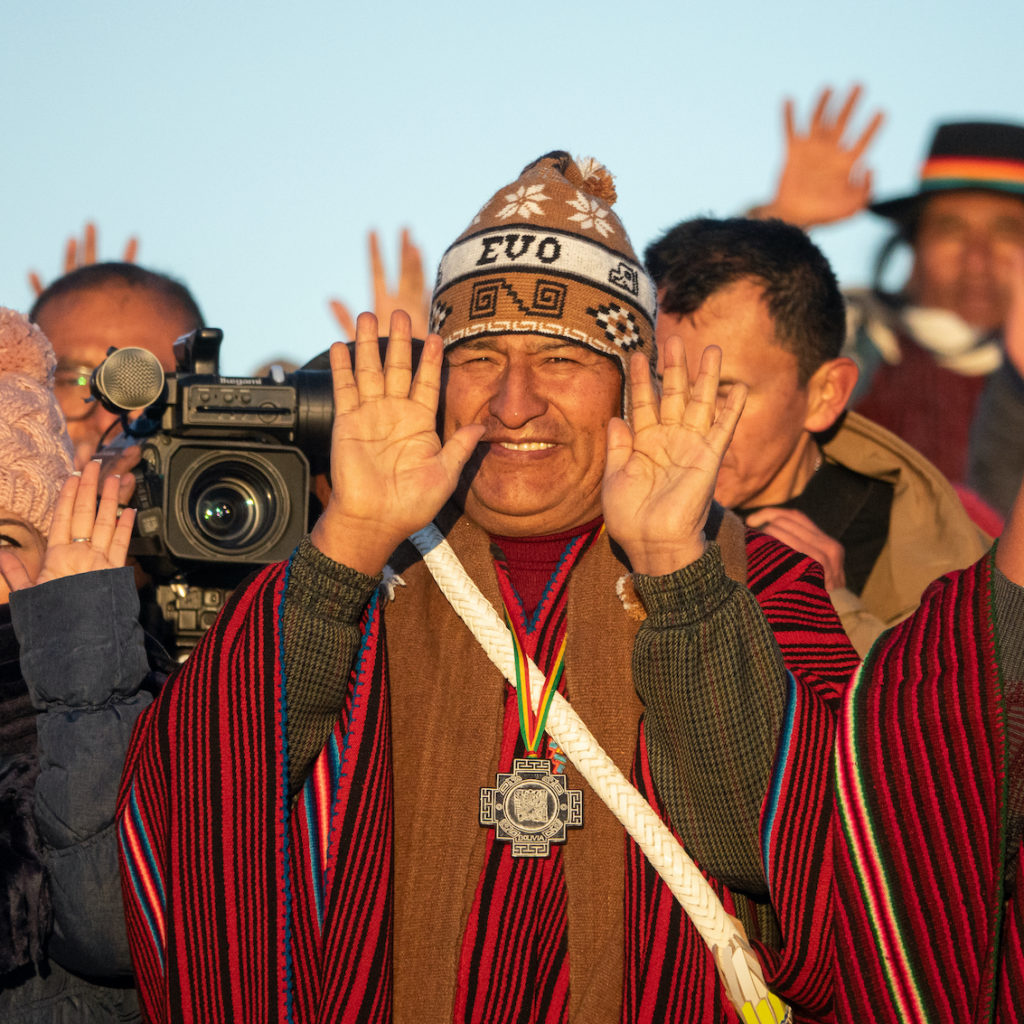 Bolivian President Evo Morales, who juxtaposed the mestizo and indigenous “people” against an overwhelmingly European “elite”, participates in the traditional Aymara New Year ceremony in Tiwanaku, Bolivia on June 21, 2019.

Ethno-populism is a form of political mobilization in which a leader rallies support from a specific ethnic group (or groups) along communal lines. It emerges when nationalism is co-articulated with populism in a single political system.

Nic Cheesemana and Miles Larmer argue in an article that ethno-populist strategies are more viable when two socio-economic conditions are present in African context. The first condition relates to the social basis of ethno-populist parties, which typically draw on the “ethnic” appeal of party leaders to their own communities in addition to a more overarching populist message that is usually most effective in more cosmopolitan urban constituencies. Given this, they hypothesize that societies with a history of both urban radicalism and identity politics are more likely to give rise to strong ethno-populist movements. The second factor they identify concerns political strategy. Leaders must be able to articulate shared narratives of exclusion in order to integrate diverse constituencies into a united campaign. On this basis, they suggest that ethno-populism is most feasible where urban areas have comparatively high economic and political significance, such that patterns of rural – urban – rural migration and urban–rural remittances bridge the divide between urban and rural voters and increase the willingness of rural communities to support populist parties.

According to an article by Erin Kristin Jenne, nationalist politicians use symbols to mobilize the population against perceived foreign or domestic threats related to the ethnos. Hence, nationalist governments are more likely to adopt policies that tilt the playing field toward members of the national in-group—both inside and outside the state’s borders. Examples include Moscow’s support for Russian separatists in Donbas and Crimea; and Belgrade’s support for Serbs in Kosovo and Bosnia in the 1990s.

Jenne says ethno-populists combine the demagoguing of national outgroups with the demagoguing of elites. The populist metanarrative holds that ‘the people’ who are politically affiliated with the leader and exploited by domestic and global ‘elites.’ The nationalist metanarrative holds that the subset is members of ‘the nation’ who are threatened by ‘enemy nations’ or ‘national others.’ Ethno-populism blends these threats by propagating narratives whereby enemies from beyond (migrants, immigrants, ethnic minorities) couple or even conspire with enemies from above (the EU, UN, IMF, ‘global elites’ or foreign powers) to undermine or even de-nationalize the nation-people.

This is one reason conspiracies involving the George Soros—the left-leaning Jewish billionaire philanthropist known for backing liberal causes—feature so prominently in contemporary ethno-populist rhetoric. Such theories hold that immigrants, refugees and others are not so much desperately vulnerable individuals fleeing from chaos or hardship in their own countries, as they are political set pieces in a premeditated plot to destroy nations-as-people. The resonance of such theories helps to explain how vicious attacks against such marginalized groups become thinkable.

In recent decades, most of the nationalist parties have taken an ethno-populist form—or what Cas Mudde calls the populist radical right. Although most far-right parties have not increased their overall share of the vote in their respective countries, they are entering government at a greater rate. Populations appear somewhat more attracted to ethno-populist (or authoritarian populist) discourses in the wake of global and national crises, such as the Great Depression, the end of the Cold War and collapse of communist and, most recently, the Great Recession in 2007–9. These ‘movements of crisis’ have given rise to extreme ethno-populist impulses in dozens of countries.

Nonetheless, according to Jenne, ethno-populism does not grip every society, nor even the same society all the time… During periods of heightened insecurity, political agents emerge to fulfill grass roots demands for policies with an in-group bias. Political leaders who advocate excluding those who are perceived as material or existential threats to the nation-people tend to enjoy considerable popularity during such times… When ethno-populists gain access to state power, they tend to foment paranoia about, and dehumanization of, out-groups. This can lead to draconian state policies aimed at policing the boundary between in- and out-groups.

In some instances, particularly in Latin America and Africa, “the elites” are conceived not just in economic but also in ethnic terms, representing what political scientists have termed ethno-populism. In Bolivia, for example, the left-wing populist leader Evo Morales juxtaposed the mestizo and indigenous “people” against an overwhelmingly European “elite”, declaring that “We Indians [i.e. indigenous people] are Latin America’s moral reserve”. In the Bolivian case, this was not accompanied by a racially exclusionary approach, but with an attempt to build a pan-ethnic coalition which included indigenous Bolivians against the largely European Bolivian elite.

In South Africa, the populist Julius Malema has presented black South Africans as the “people” whom he claims to represent, calling for the expropriation of land owned by the white minority without compensation. In areas like Europe where nation-states are more ethnically homogenous, this ethno-populist approach is rare given that the “people” and “elite” are typically of the same ethnicity.

Krzyzanowski, M. (2018). Discursive Shifts in Ethno-Nationalist Politics: On Politicization and Mediatization of the “Refugee Crisis” in Poland. Journal of Immigrant & Refugee Studies, 16 (1-2), 76-96.