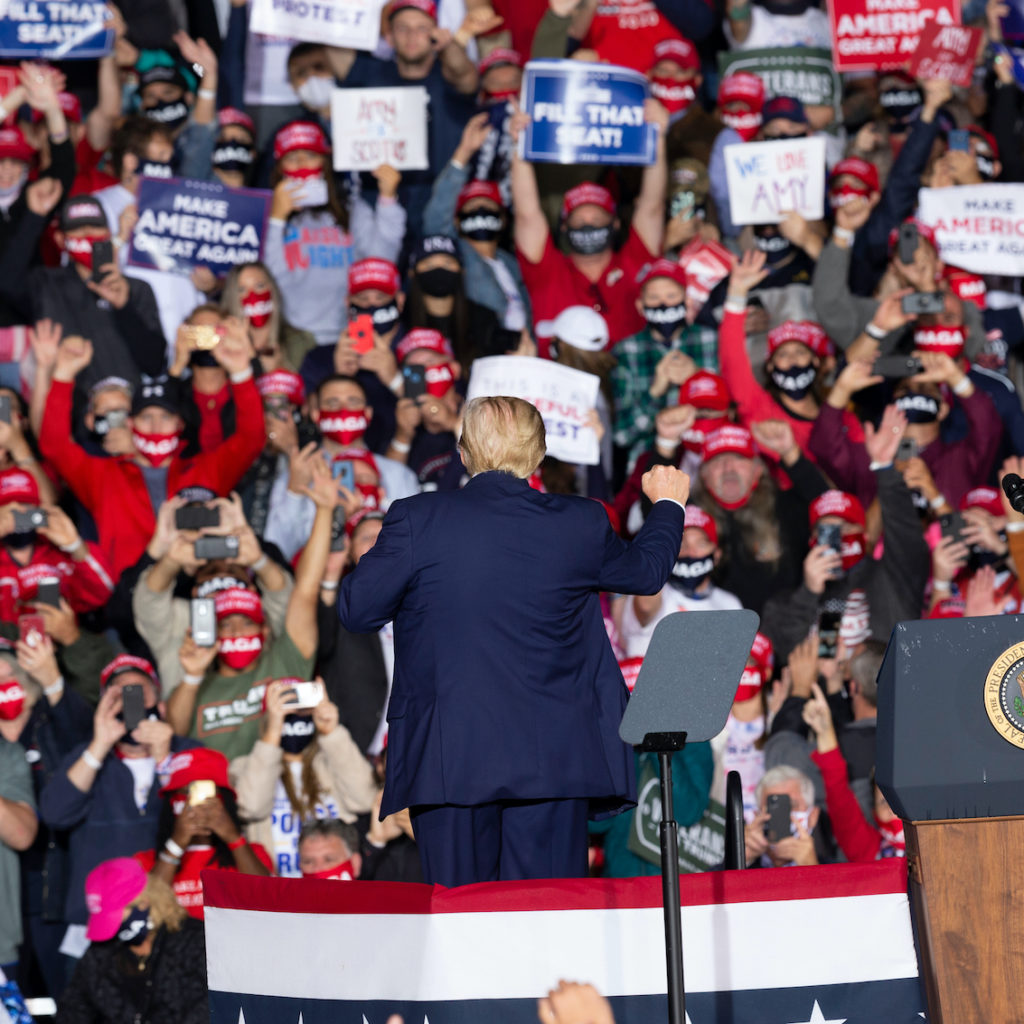 US President Donald Trump greets supporters at MAGA rally for Presidential election 2020 at Harrisburg airport in Middletown, PA on September 26, 2020.

In political philosophy, the general will (volonté générale) is the will of the people as a whole. The term was made famous by 18th-century Genevan philosopher Jean-Jacques Rousseau. Rousseau distinguishes the general will from the particular and often contradictory wills of individuals and groups. In “The Social Contract” (1762), Rousseau argues that freedom and authority are not contradictory, since legitimate laws are founded on the general will of the citizens. In obeying the law, the individual citizen is thus only obeying himself as a member of the political community.

Rousseau assumed that all people are capable of taking the moral standpoint of aiming at the common good and that, if they did so, they would reach a unanimous decision. Thus, in an ideal state, laws express the general will. While citizens may be wrong and deceived, according to Rousseau, they will aim at justice as long as they pursue the interest of the people rather than follow their interest as individuals or as members of different groups. Seen from this perspective, the individual who breaches the law is acting not only against the instituted government but also against that individual’s higher interest as a member of the political community.

The phrase “general will” occurs in Article Six of the Declaration of the Rights of Man and the Citizen composed in 1789 during the French Revolution: “The law is the expression of the general will. All citizens have the right to contribute personally, or through their representatives, to its formation. It must be the same for all, whether it protects or punishes. All citizens, being equal in its eyes, are equally admissible to all public dignities, positions, and employments, according to their capacities, and without any other distinction than that of their virtues and their talents.”

A component of the ideational approach to populism is the idea of the general will. An example of this populist understanding of the general will can be seen in Hugo Chávez’s 2007 inaugural address, when he stated that “All individuals are subject to error and seduction, but not the people, which possesses to an eminent degree of consciousness of its own good and the measure of its independence. Because of that its judgement is pure, its will is strong, and none can corrupt or even threaten it.” For populists, the general will of ‘the people’ is something that should take precedence over the preferences of ‘the elite’.

The populist idea of the general will is connected to ideas of majoritarianism and authenticity. Highlighting how populists appeal to the ideals of ‘authenticity and ordinariness’, Ben Stanley noted that what was most important to populists was ‘to appeal to the idea of an authentic people’ and to cultivate the idea that they are the ‘genuine’ representatives of ‘the people’. In doing so they often emphasize their physical proximity to ‘the people’ and their distance from ‘the elites’.

In emphasizing the general will, many populists share the critique of representative democratic government previously espoused by Rousseau. This approach regards representative governance as an aristocratic and elitist system in which a country’s citizens are regarded as passive entities. Rather than choosing laws for themselves, these citizens are only mobilized for elections in which their only option is to select their representatives rather than taking a more direct role in legislation and governance. Therefore, populists often favor the use of direct democratic measures such as referenda and plebiscites. Populist notions of ‘the general will’ and its links with populist leaders are usually based on the idea of ‘common sense’.

According to The Oxford Handbook of Populism, essential to populist politics is the concept of a general will, closely linked to the homogenous interpretation of the people. “Based on a kind of vulgar Rousseauian argument, populists argue that politics should follow the general will of the people. After all, as the people are pure and homogenous, and all internal divisions are rejected as artificial or irrelevant, they have the same interests and preferences,” wrote handbook and continued “The belief in a general will of the people is linked to two important concepts in the populist ideology: Common sense and special interests. According to populists, anyone who opposes common sense is, by definition, devious and part of the corrupt elite. By arguing to propose ‘common sense solutions’ to complex problems, populists often implicitly also argue that the elite creates problems and is out of touch with the people. Moreover, they can present themselves as the voice of the people (vox populi), expressing its general will, and as non- or reluctantly political.”

Edward Weber wrote in an article that, in the populist worldview, the balance of power in the state should be changed in favor of the people and to the disadvantage of political, economical and other societal elites as well as international organizations and their laws. Institutional reforms for an introduction or expansion of direct democracy can be one possible way to attain this goal. But there are also more authoritarian options to further people’s power, as installing a political leader who acts as plebiscitary ruler and spokesperson of the ‘volonté general’.