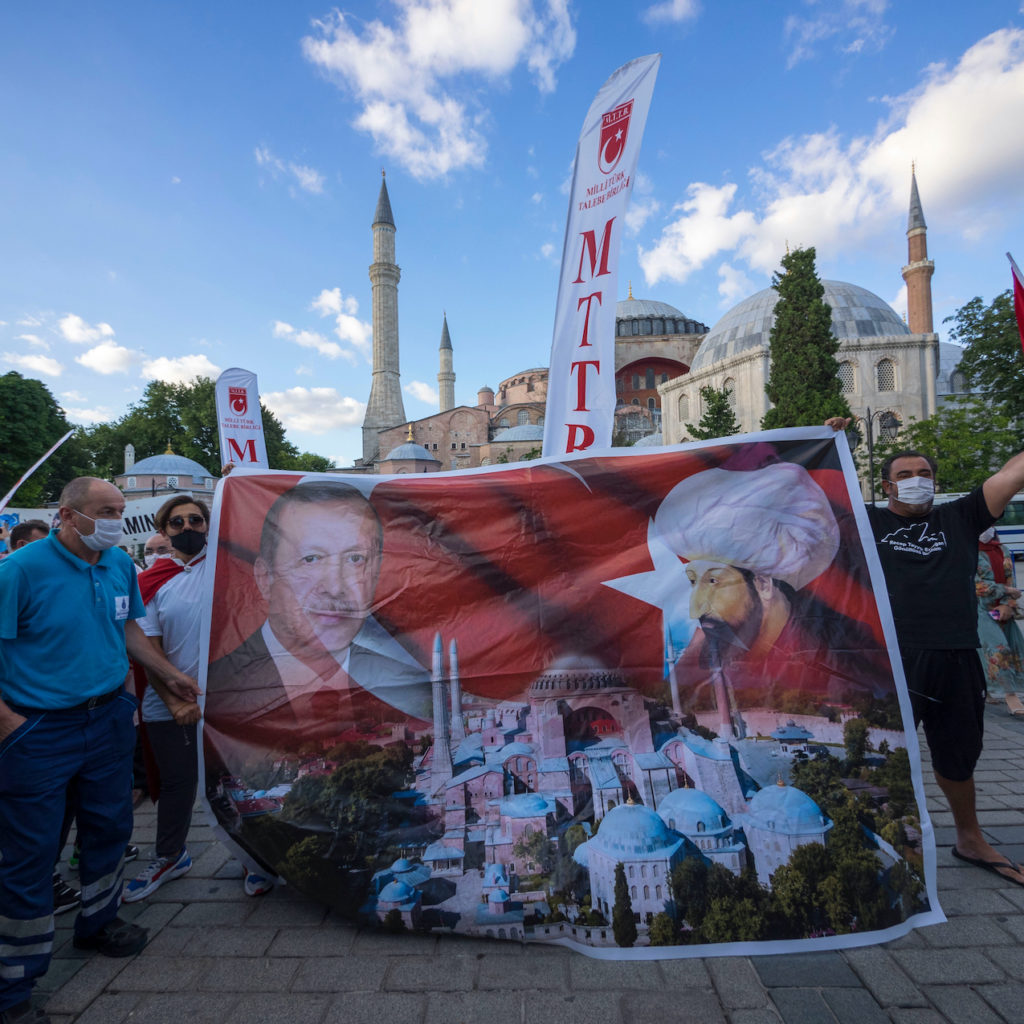 After the decision to open Hagia Sophia as a mosque, people gathered in front of Hagia Sophia opened a poster of Fatih Sultan Mehmet and Turkish President Recep Tayyip Erdogan in Fatih, Istanbul on July 10, 2020.

The last decade has seen the emergence of a vigorous new form of Islamic populism in parts of the Muslim world, which mainly articulates both the rising ambitions and the growing frustrations of urban populations across the Muslim world.  According to an article written by Vedi R. Hadiz for Routledge Handbook of Global Populism, the evolution of Islamic populism is intertwined with an age of neoliberal globalization that has been associated with extreme wealth disparities virtually all around the world. Hadiz wrote that “Islamic populism has stepped into the vacuum created by the demise of the left in circumstances where the onslaught of neoliberalism has meant growing inequalities and precarity. Islamic populism can be seen as a variation in the more general phenomenon of the global rise of populist politics, which nevertheless always takes forms that are defined by the relevant social and historical context.”

According to another article written jointly by Vedi R. Hadiz and Chuan Ming Ong, while reaching out to marginalized sections of the bourgeoisie, this “New Islamic Populism” displays little attachment to the political liberalism often associated with middle classes. Neither does it express the anxieties of urban poor populations with reference to leftist ideologies. Representing newly emerging cross-class coalitions, it focuses on winning greater access to state power and tangible material resources for the ummah (the community of believers).

To the authors, the constituency to which it appeals is notably conceived as both downtrodden and homogeneous, contradicting the reality of its increasingly diverse internal composition. It is also increasingly national, rather than pan-Islamic, because the New Islamic Populism has predominantly evolved out of struggles taking place against the overseers of authoritarian national states. Importantly, there is nothing that is innately anti-capitalist, in spite of the egalitarian rhetoric, nor anti-democratic in the resultant agenda.

Some excerpts from the article, which analysis the cases of Indonesia, Egypt and Turkey, as follows:

“There has been renewed emphasis on populist politics over the last decade due to responses made in the name of ‘ordinary people’ to the practice and social effects of capitalist development and global integration. At the same time, there has been an explosion of new interest in Islamic politics. The link between populism and Islamic politics is not new, but today it is taking a new form.

“The older Islamic populism was concerned primarily with safeguarding the position of petty propertied urban and rural interests in an age of Western colonial domination. Some organizations associated with the older Islamic populism continue to be strong, such as Indonesia’s Muhammadiyah, the ‘reformist’ vehicle of urban traders and its competitor, and the Nahdat’ul Ulama, traditionally led by rural-based land-owning clerics and their followers. Both were established in the late colonial period.

“In contrast to that traditional, older form, the newer Islamic populism in Indonesia and elsewhere is more distinctly cross-class in its social base, strongly embracing sections of the urban middle class and poor and even relatively marginalized sections of the bourgeoisie. Unlike the older movements, which were led by small-scale merchants and well-to-do land owners that won broad followings among the peasantry, the newer form tends to be led by educated professionals and powerful businesspeople.

“Because of its composition and leadership, the agenda of the New Islamic Populism is thoroughly modern: to reorganize power in ways that favor an ummah that is increasingly diverse in its class bases. This entails efforts to ensure greater access to, and control over the state and tangible resources. Such an agenda was harder to conceive by the dominant representatives of the older form of Islamic populism, composed as they were by petty landowners and merchants who had encountered capitalism through the prism of Western colonialism.

“By contrast, the social agents of the New Islamic Populism are quite comfortable working within contemporary capitalism. Furthermore, though calling for change, they do not envisage an overhaul of the economic system except through appeals to Islamic morality, thereby facilitating the political and economic ascendance of the pious. Indeed, the conception of the ummah has evolved to highlight a mass of socially and economically deprived but morally upright and virtuous ‘ordinary people’ who stand opposed to rapacious and immoral elites. Such a conception is a hallmark of populist ideology more generally.

“In other words, the New Islamic Populism envisions a kind of state led by the righteous that would facilitate markets that operate in ways favorable to the ummah. But this does not necessarily require the establishment of an overtly Islamic state, though such a call is often made by those least positioned to make headway through the formal mechanisms of politics. Nevertheless, even such actors complain little about the principle of capital accumulation as such. Representatives of the New Islamic Populism more commonly aspire toward a capitalist state and society that would see power and resources redistributed more “justly” and, by consequence, benefit those currently marginalized within existing social hierarchies.

“The New Islamic Populism is a variant of the more universal phenomenon of populism as a societal response to some of the fundamental problems of social injustice in a globalized world in which leftist challenges have diminished. It is more specifically a product of the outcomes of Cold War-era conflicts in Muslim societies and the social contradictions of capitalist development, particularly in the current globalized and neo-liberal phase.”

According to an article by Ihsan Yilmaz, the secular Republic of Turkey, as it has been known, does not exist anymore. He wrote that “All analysts and scholars seem to agree that Turkey is in the process of radical change as a result of the growing composite ideology consisting of Islamism, populism, nationalism, and authoritarianism. Different categorizations have been used to define the new regime in Turkey, such as, Islamist authoritarianism, Islamist populism, electoral authoritarianism, and Erdoganism. They underline a shift to majoritarianism at the expense of pluralism, to religious and nativist values at the expense of open society and democracy, to elective authoritarianism at the expense of free and fair elections, and to Islamist populism at the expense of democratic liberalism. What is more, the Justice and Development Party (AKP) government has actively pursued the regional strategy of promoting transnational populism while exporting its Islamism to Turkish diasporas across the world using state transnationalism.”

To Yilmaz, as a well-funded ideology, Erdogan’s Islamist populism has found its way into various Muslim communities in the West. Erdogan’s AKP has used any means possible to influence Muslims living in the West, such as, by sponsoring mosques in Europe and the US, conferences and their keynote speakers, trips to Turkey for Muslim diaspora members, among other things. These methods have had some success.

Yilmaz wrote Erdogan’s party manipulated electoral politics for Islamist purposes by using popular support to consolidate power and capture the state in 2011, establishing a new regime which has four main dimensions: electoral authoritarianism as the electoral system, neopatrimonialism as the economic system, populism as the political strategy and Islamism as the political ideology. “Since 2011, the entire AKP discourse has been based on hate speech, polarization, conspiracies, anti-Western sentiments, Islamist victimhood narratives, and Islamist populism,” said Yilmaz.

How an Islamist Party managed to legitimate its authoritarianisation in the eyes of the secularist opposition: the case of Turkey — Ihsan Yilmaz, Mehmet Caman, Galib Bashirov, (2020), Vol. 27, pp. 265-282, Democratization, Abingdon, Eng., C1.

Kalaycıoğlu, Ersin, (2010) “Justice and development party at the Helm: resurgence of Islam or restitution of the right-of-center predominant party?”, Turkish Studies, Vol.11, No.1, 29-44 (SSCI).