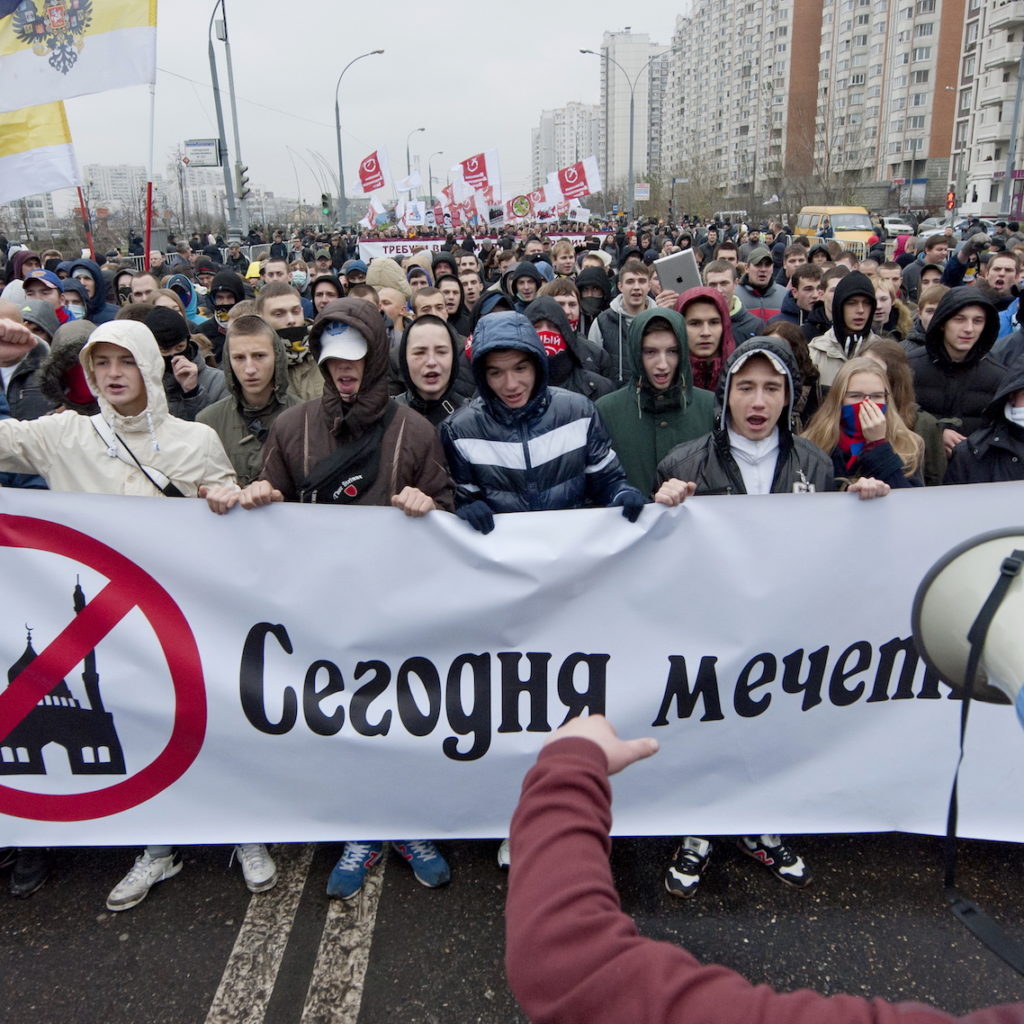 In Europe, the rise of populism is coupled with the rise of Islamophobia, vividly evident with exponential increases in votes for anti-Islam political parties in national elections. These parties portray Islam and Muslims as threats and maintain a position that Islam (as a religion and culture) is a threatening contrast to European values. Islamophobia is generally defined as the fear, hatred of, or prejudice against the Islamic religion or Muslims. However, the meaning of the term continues to be debated, and some view it as problematic. Several scholars consider Islamophobia to be a form of xenophobia or racism.

Some scholars view also Islamophobia and racism as partially overlapping phenomena, while others dispute the relationship, primarily on the grounds that religion is not a race. The causes and characteristics of Islamophobia are also subject of debate. Some commentators have posited an increase in Islamophobia resulting from the 9/11 attacks, the rise of ISIL, and other terror attacks in Europe and the US by Islamist extremists. Some have associated it with the increased presence of Muslims in the US and in the EU, while others view it as a response to the emergence of a global Muslim identity.

There are a number of other possible terms which are also used in order to refer to negative feelings and attitudes towards Islam and Muslims, such as anti-Muslimism, intolerance against Muslims, anti-Muslim prejudice, anti-Muslim bigotry, hatred of Muslims, anti-Islamism, Muslimophobia, demonisation of Islam, or demonization of Muslims.

In recent years, according to an article by Farid Hafez, Islamophobia has become a useful tool for right-wing parties to mobilize electors in many European nation-states. He said “the general xenophobic campaigns of the 1980s have given way to Islamophobia as a specific expression of racism. It is not only the new incarnations of right-wing populist parties that are making use of Islamophobic populism, but also right-wing extremist parties, whose traditions hark back to fascist or Nazi parties.”

To the author, this development appears unsurprising, as Islamophobia has somehow become a kind of ‘accepted racism’, found not only on the margins of European societies but also at the center. “Another interesting concomitant shift is the attempt by such parties to gain wider acceptance in mainstream societies by distancing themselves from a former antisemitic profile. While the main focus on an exclusive identity politics in the frame of nation-states previously divided the far right and complicated transnational cooperation, a shared Islamophobia has the potential to be a common ground for strengthening the transnational links of right-wing parties,” wrote Hafez.

“This shift from antisemitism to Islamophobia goes beyond European borders and enables Europe’s far right to connect to Israeli parties and the far right in the United States,” said Hafez and added “Islamophobia has become the main exclusionary project of the far right: an attempt to mark Muslims as naturally different—at times as inferior and capable of conspiring against their western ‘host societies’—in order to oppress them collectively and exclude them from the national collective.”

According to a study conducted by Cemal Öztürk and Gert Pickel, the motivation of right-wing populists is self-evident: They anticipate support for their nativist policies, and they bet on widespread fears of Islam and Muslims among the population. Unlike the blatant racism of the new right in the 1960s and 1970s, Islamophobia extends into the mainstream of society. Some authors have gone as far as calling hostility towards Muslims an “accepted form of racism”.

“Islamophobia is fed by a nativist rejection of Muslim migrants, strongly rooted in old stereotypes but cashing in on some new fears. It even comes in the guise of an enlightened critique of religion, in which Islam is depicted as being intolerant, dogmatic, misogynistic, homophobic, antisemitic, or simply antiliberal,” wrote Öztürk and Pickel. To them, Islamophobia refers to generalized derogatory attitudes towards Muslims, based on the identification of their religious background, to which negative attributes are ascribed. It goes without saying that ideological and cultural factors play an important role when it comes to hostility towards Islam and Muslims.

Öztürk and Pickel also underlined that “many citizens view Islam as a foreign culture. In addition, Muslims are perceived as a non-assimilable group of immigrants. Social psychology theories reveal that religious affiliation plays a crucial role in these processes. Social psychology offers a long tradition of describing the mechanisms involved in this process. At a basic level, anti-Muslim prejudice arises from a process of categorization: Individuals attribute negative characteristics to a large human group—in this case, Muslims—based on their perceived religious background.”

To the authors, the right-wing populist rhetoric attempts to portray the very existence of Muslims as an invasion of the Occident. This claim causes consequences: In particular, symbolic threat perceptions have been deemed to be the driving force of anti-Muslim prejudices. “Whatever the sources of Islamophobic attitudes are based on, they offer right-wing populism a fearful and receptive mainstream audience to which they can campaign for their programs, well beyond their loyal constituents,” wrote the authors and added “This means that merely by highlighting any distinctive feature of the group in question, the fear discourse can be used as a tool to gain new followers. Moreover, considerable consensus exists that the electoral success of right-wing populist parties would not have been possible without widespread resentment against Muslims.”

According to the study of Öztürk and Pickel, the fear of an Islamization originates from the visible consequences of a Muslim presence in Europe, such as headscarves and long beards, but halal supermarkets, kebab shops, and mosques also play a role. The fear can also arise from a secular critique of the allegedly misogynistic, homophobic, or antisemitic behavior of Muslim communities. The problem is exacerbated when right-wing populists dramatize these fears and mingle them with the attacks on the political elite. In this vein, right-wing populists more and more frequently employ conspiracy theories and insinuate that mass migration, managed by liberal elites, has the long-term goal of a great replacement.

According to the article, fueled by nationalist collective identities and cultural threat perceptions, Islamophobia turns out to be a propelling force of right-wing populism. Developments in Eastern Europe are particularly virulent. The population’s reservations about Muslim immigrants are extremely high in this part of Europe. It is precisely the minuscule size of the Muslim population that is conducive to widespread animosity against them. Citizens have little opportunity to engage in genuine encounters with Muslims to counter the nightmarish images spread by the media and politicians and thus remain fearful and drawn to right-wing populists’ claims. “Islamophobia without Muslims has proven to be a blessing for right-wing populists,” wrote Öztürk and Pickel and added that “this social climate has made it easier for them to enter government coalitions or even to win elections.”

To Öztürk and Pickel, right-wing populists know how to instrumentalize this conflict potential of religious affiliations and convert it into electoral success. “The dangers this can pose for democracy have become particularly evident in Eastern Europe. The Islamophobic oil on the wheels of European right-wing populists deserves more scholarly attention, but most importantly, social ostracism needs to be looked at and discussed. Islamophobia first hits Muslims, but an attack on them, or any group, is a declaration against the open society.”

Allen, C. (2017) Islamophobia and the Problematization of Mosques: A Critical Exploration of Hate Crimes and the Symbolic Function of “Old” and “New” Mosques in the United Kingdom, in Journal of Muslim Minority Affairs (Vol. 37, No.3: 294-308).

Allen, C. (2015), ‘“People hate you because of the way you dress”: Understanding the invisible experiences of veiled British Muslim women victims of Islamophobia’ in International Review of Victimology (Vol. 21, No. 3: 287-301).

Awan, I and Zempi, I. (2019) (Eds.) Routledge International Handbook of Islamophobia, Routledge Handbooks, UK and US Edition. https://www.routledge.com/The-Routledge-International-Handbook-of-Islamophobia/Zempi-Awan/p/book/9780815353751

Awan, I. and Zempi, I. (2019) Islamophobic Hate Crimes: A Student Textbook, Routledge, UK and US Edition. https://www.routledge.com/Islamophobic-Hate-Crime-A-Student-Textbook/Awan-Zempi/p/book/9781138552708

Awan, I and Zempi, I. (2016) Islamophobia: Lived Experiences of Online and Offline Victimisation. Bristol: Policy Press.https://policy.bristoluniversitypress.co.uk/islamophobia

Awan, I. (2016) Islamophobia on Social Media, A Qualitative Analysis of the Facebook’s Walls of Hate, International Journal of Cyber Criminology, 10 (1): 1-20.

Awan, I. (2019) Islamophobia in Europe, Oxford Key Readings in Islam.

From the Far Right to the Mainstream Islamophobia, Party Politics and the Media, ed. vol. Farid Hafez, Humayun Ansari (Campus, 2012).

‘From Jewification to Islamization: Political anti-Semitism and Islamophobia in Austrian politics then and now’, Farid Hafez, ReOrient, Vol. 4, No. 2, Spring 2019, 197-220.