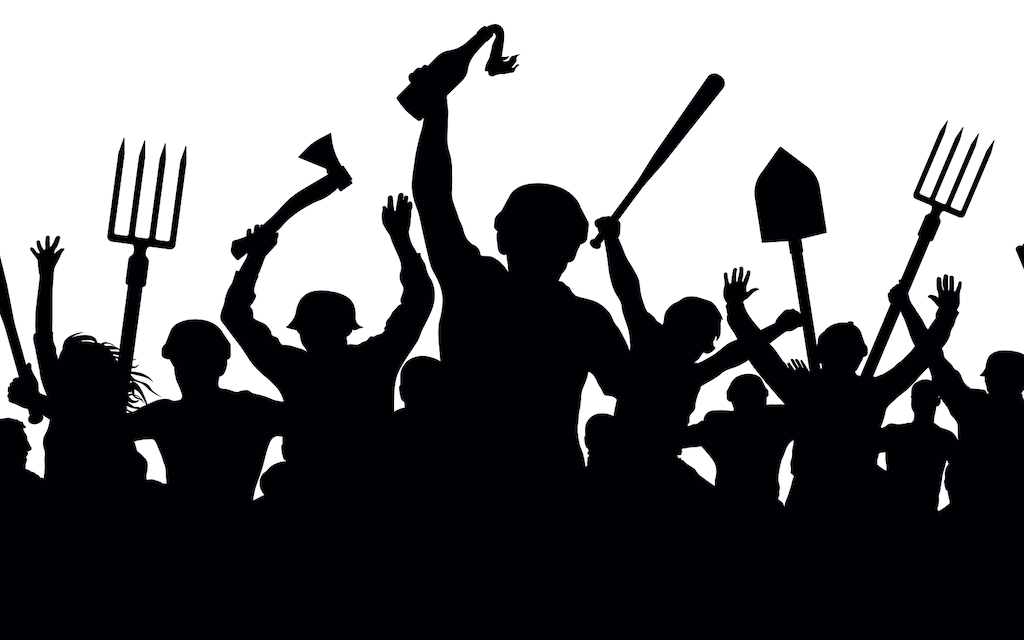 A political system in which a mob is the source of control; government by the masses. Webster Dictionary defines mobocracy as a condition in which the lower classes of a nation control public affairs without respect to law, precedents, or vested rights.

So, mobocracy (literally “rule by the mob”) is a layman’s version of the term ochlocracy, where the will of the majority rules, and disputes are often settled by brute force or the sheer weight of people. Another word is majoritarianism, for obvious reasons. The term “mobocracy” has been in use since the 18th century, often used as a pejorative description of democracy. It is sometimes used to describe anarchism, but it’s debatable whether mobocracy is a form of anarchy as one group is seen to legitimately rule over others by whim.

Anthony R. Brunello states in one of his articles that political movements that allow followers to compromise their moral values should always be suspect in our eyes and they are easily converted from populism to mobocracy: government by the mob. According to him, the great illusion is hidden in the belief that in acting as the mob, the common people are engaged in democratic action. This is when a fear born movement displays a threat to freedom. Resenting, hating, excluding and asserting your rights against ‘The Other’ derives from a primordial passion in humanity called fear. It is not democratic.”

Brunello says that fear and ignorance bring people together for mutual support and combine in generating a mob—and mobs become politically very potent if their perceptions have been properly manipulated. In 1951, Eric Hoffer argued in his classic book The True Believer that in the mob, or the mass, human decency is lost as the individual casts judgment and doubt aside for the group mind.

According to an article by Antony Todorov, populist leaders in history have often resorted to plebiscites, primarily for the purpose of overcoming resistance from parliament. While such strategies have succeeded in many cases, they have often ended in some form of ‘mobocracy’, in which the mob rules directly, without any constraints, on any matter, including legal matters. On the other hand, to Jeffrey Rosen, James Madison’s worst fears of mob rule have been realized in the US — and the cooling mechanisms he designed to slow down the formation of impetuous majorities have broken.

Mobocracy is defined by Matthew Robinson in his book as “a place where opinion polls, wielded by a cynical, ideologically-driven press, distort the news and change opinion. It’s a place where the fleeting whims of a largely ignorant populace are used to supplant thoughtful, reasonable debate, and where, all too often, pollsters and the art they practice are shrouded behind a cloudy curtain of clever wording, data manipulation, and hidden agendas.”