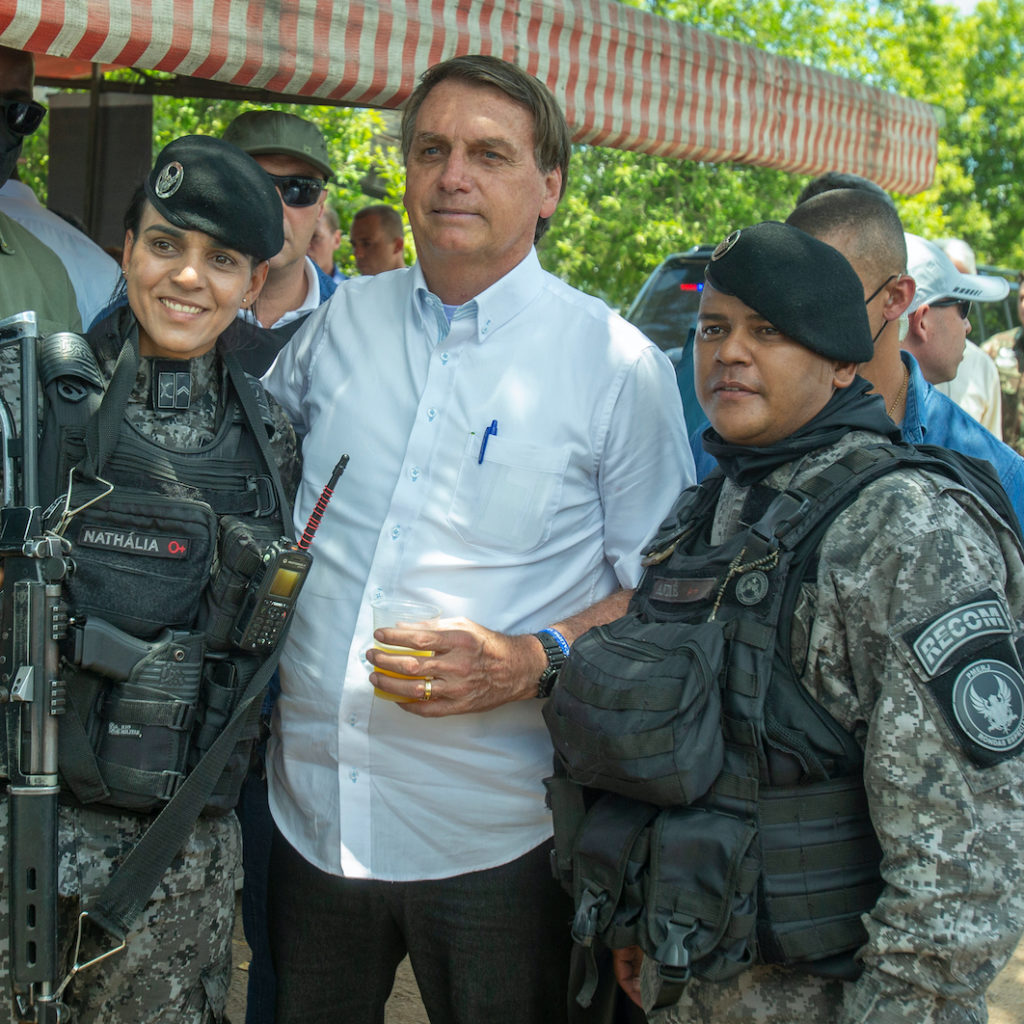 Right-wing populist parties successfully construct fear and – related to the various real or imagined dangers – propose scapegoats that are blamed for threatening or actually damaging their societies in Europe and beyond, according to an article by Ruth Wodak. All right-wing populist parties instrumentalize some kind of ethnic/religious/linguistic/political minority as a scapegoat for most if not all current woes and subsequently construe the respective group as dangerous and a threat ‘to us’, to ‘our’ nation; this phenomenon manifests itself as a ‘politics of fear’.

Dick Pels lists various socio-political challenges that currently concern voters, especially during times of financial and environmental crises, and which are related to a multitude of fears, disaffection and pessimism: fear of losing one’s job; fear of ‘strangers’ (i.e. migrants); fear of losing national autonomy; fear of losing old traditions and values; fear of climate change; disappointment and even disgust with mainstream politics and corruption; anger about the growing gap between rich and poor; disaffection due to the lack of transparency of political decision making and so forth. Thus, according to Wodak, when analyzing right-wing (or left-wing) populist movements and their rhetoric, it is essential to recognize that their propaganda – realized as it is in many genres across relevant social domains – always combines and integrates form and content, targets specific audiences and adapts to specific contexts.

Wodak writes that right-wing populist parties seem to offer simple and clear-cut answers to all the fears and challenges mentioned above, for example by constructing scapegoats and enemies – ‘Others’ which are to blame for our current woes – by frequently tapping into traditional collective stereotypes and images of the enemy. It is therefore important to understand and explain how right-wing populist parties continuously construct fear in order to address the collective common-ground as well as their reasons and (rhetorical and communicative) means.

David Altheide in his book Creating Fear very convincingly presents the ways in which scenarios of danger have been constructed ubiquitously: “Fear begins with things we fear, but over time, with enough repetition and expanded use, it becomes a way of looking at life. Therefore, it is not ‘fear of crime’, for instance, that is so interesting to me, but rather how fear has emerged as a framework for developing identities and for engaging in social life. Fear is one of the perspectives that citizens share today; while liberals and conservatives may differ in their object of fear, all sides express many fears and point to ‘blameworthy’ sources – often each other! The fear ‘market’ has also spawned an extensive cottage industry that promotes new fears and an expanding array of ‘victims’.”

Paul Chevigny writes in an article that in democratic countries there has been a political trend toward appealing to the fear of crime as a popular issue in electoral campaigns, as well as more generally as a way of attracting public notice. The trend is likely to be particularly strong in countries in which major offices are openly contested for election, but economic inequality is pronounced and the willingness or ability of the government to deliver social services is limited. Under those conditions, there is a strong temptation to find an issue that will appeal to all classes; the issue of crime and the consequent fear of insecurity is an obvious issue that is frequently used and is sometimes even exaggerated in the hope of enlisting popular support.

According to an article by Peter S. Lehmann, Cecilia Chouhy, Jessica N Stevens and Marc Gertz, in essence, political figures use fear of crime to justify imposing punitive measures to protect against a specific type of offender. Researchers make clear the implications of heightened fear on the relationship between economic anxieties and punitive attitudes as well as the relationship between fear of crime and punitiveness. Increases in crime and violence beginning in the 1980s have become a defining characteristic of Latin America, and, as a result, fear of crime is high in many Latin American countries, even those such as Chile with relatively low crime rates. For example, Argentina exhibited a sharp increase in levels of fear of crime, from 20 percent in the 1980s to 80 percent in 2009, and there are high levels of fear of crime in Mexico as many Mexicans do not feel safe in their neighborhoods and protect their homes with locks or barred windows.

The populism of fear is based on “appeal to fear”, with the aim to influence a person and to encourage this person to make such a decision which would eliminate the said fear from consciousness and that it is an exponent of the deepest hopes of ordinary people, according to an article by Guillem Rico, Marc Guinjoan and Eva Anduiza. So, it undermines trust in all intermediary institutions. It is also perceived as an authoritarian trend and enemy of “pluralistic” democracy. Crime hysteria and the rise of a network of criminal justice apparatuses prepared public opinion. Both lead to social control of the nonmarginal parts of the populace as they prepare people to accept control and put control apparatuses in place.

As infamous examples both the Philippines’ Rodrigo Duterte and Brazil’s Jair Bolsanaro ran on the promise of law and order, emerging from contexts plagued by crime and corruption, according to an article by Robert Tyler Valiquette and Yvonne Su. To them, both men are practicing penal or criminal populism. They are offering simplistic solutions to complex problems of development but what they have undertaken does not solve the issues of poverty, inequality, and corruption within their own countries.

For instance, according to the article, before Duterte’s election, the Philippines saw an increase of 300 percent in serious crime from 2012–2014. Duterte and other politicians have lobbied on the public’s fear of crime and drugs spreading across the country and into their communities. Brazil’s transition to democracy has also been rocky. Brazil has one of the highest levels of urban poverty in Latin America and carries the same of having the highest levels of income inequality in the region. The well documented “Lavo Jato” anti-corruption campaign shed light on billions of reals in money laundering lining the pockets of politicians. Additionally, a record high 62,000 Brazilians died because of violent crime in a year, including well known politician Marielle Franco.

“There is no denying that the economic and safety issues of both countries contributed to the rise of these two populist strongmen. Duterte and Bolsonaro harnessed the frustration and fears of their citizens and rode on a wave of criminal populism. Their tough talk and rhetoric resonated with an electorate that was desperate for change. Upon his nomination for president in 2015, Duterte emerged as a front runner because of his reputation for being tough on crime. He promised to kill over 100,000 criminals and dump their bodies in Manila Bay,” according to Valiquette and Su.

They wrote that Jair Bolsonaro shares many similarities with Duterte. He also focused on eliminating the country of corruption and crime. He promised to use the military to eradicate criminals. He wants to loosen gun regulations to allow people to defend themselves. Since his election, videos have emerged of police in Rio piling dead bodies into the back of vehicles. Politicians from Bolsonaro’s party praised the efforts to clean up the streets. He promises to fight violence, with violence.

Duterte also attacked the press, according to Valiquette and Su, and even going so far as charging and arresting journalists critical of his government. He supports extra-judicial killings. He has declared martial law in parts of his country. He has ordered Congress to impeach a Supreme Court justice for having ideological differences. He has established a political climate of fear and faces limited opposition in congress. Duterte has all but eliminated the checks and balances established in the Philippine constitution. As it stands, there is very little to stop him or to oppose his mandate, and most people are too scared to speak out. Bolsonaro has done or proposes to do similar things.

Valiquette and Su wrote that these men are practicing criminal populism. What they have undertaken does not solve the problems of poverty, inequality, and corruption within their own countries. They are simply lining their streets and favelas with dead bodies. They are fueling a sense of fear and suppressing their people.

On the other hand, according to an article by Bonn Juego, the approval of Duterte’s populist discourse has tremendous implications for the current and future standing of liberal democracy in the Philippines. The embedding of authoritarian populism is best understood not simply as political rhetoric or propaganda to deceive the population, but as a response to real problems, affecting people’s lives. It is a populist message that resonates well with people’s lived experiences, touching on the legitimate fears, insecurities, angers, resentments, anxieties and hopes of the majority.

‘Trauma and the Politics of Fear: Europe at the Crossroads’, (2013) in Nicolas Demertiz, Emotions and Politics, London: Palgrave.

“The Production of Fear. European Democracies in the age of Populisms and Technocracies”, Social Europe, June 2018, online at: www.socialeurope.eu/the-production-of-fear-european-democracies-in-the-age-of-populisms-and-technocracies