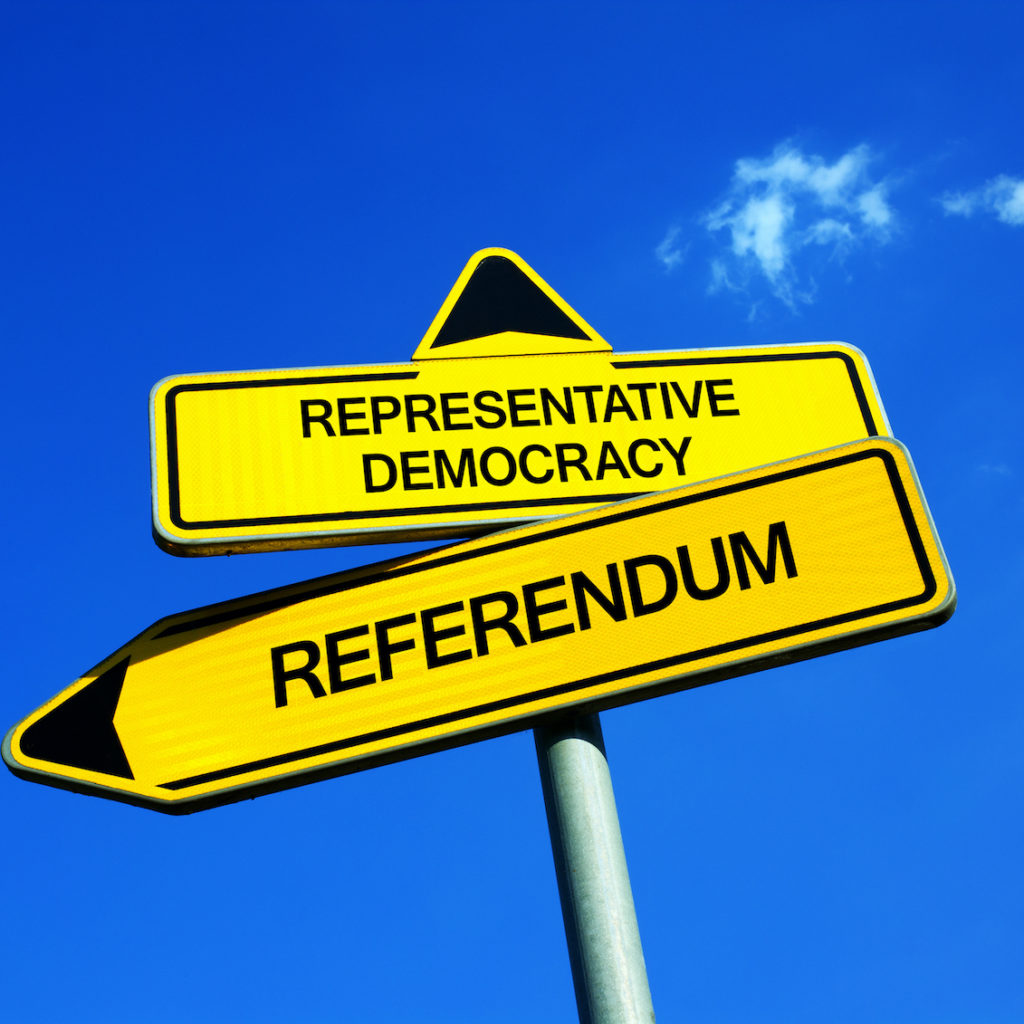 The concept of plebiscitarianism has its origin in Roman plebiscitum, meaning yes/no decisions on proposals presented to Roman plebs to approval by tribunes of the plebs. Lately, plebiscitarianism became synonymous with formal popular approval of decisions that were already done by political elites or leaders. As Nadia Urbinati explains, “the meaning of plebiscitary consensus is popular pronunciation more than popular decision.”

However, M. Victoria Murillo writes in an article that although plebiscitarianism can be detrimental to democracy and the rule of law, it is important to note that this governing style is intimately connected with leaders’ desires to serve constituents’ interests and thereby win reelection. “As such, we see the continuation of the plebiscitarian style even among leaders with vastly different political beliefs and agendas,” says she and adds that “The tension created by elections is that majoritarian mandates are often used to confirm plebiscitarian leadership, although minority presidents have also chosen that political style when relying on decrees and concentrating executive power to build electoral majorities. Whereas some presidents with plebiscitarian tendencies have expanded access to new rights in the new millennium, their way of practicing politics has often eroded the rule of law in their home countries.”

Urbinati, on the other hand, wrote in an article that now, because populist politics disdains procedures and considers the crowd rather than a regulated assembly as the site of popular power, its most congenial method of selection seems to be the investiture of the leader, rather than election. “Indeed, its expressive language is acclamation more than discussion; hence the overlapping of populism with plebiscitarianism. A populist leader is not properly elected, it is acclaimed. Consequently, Schmitt forcefully wrote that the ‘will of the people’ is the same whether it is expressed in the ballot or by acclamation, ‘everything depends on how the will of the people is formed’,” she stated.

According to Urbinati’s perspective, if populism can play a democratizing role by mobilizing the excluded majority to criticize the existent forms of political representation and to demand further participation and better forms of representation, it can have negative effects on democracy because its criticism translates into plebiscitarian forms of participation, the paradox being that the people end up by playing more the role of an audience than of a political actor.

According to an article by Sebastián L. Mazzuca in a book titled Constructing Democratic Governance in Latin America, due to their regimes of access and exercise of power, Venezuela, Ecuador, Bolivia, and Argentina form a special group of countries in South America. They are, to different degrees, plebiscitarian hegemonies. Mazzuca writes that in the polar type of plebiscitarian hegemonie, mechanisms of vertical accountability – by which citizens ratify or revoke the presidential mandate – operate with maximum frequency, whereas horizontal controls – the oversight by legislatures, courts, and comptroller – are suspended indefinitely.

On the other hand, to Mazzuca’s article, plebiscitarian access and hegemonic exercise are ‘functionally’ connected. From the perspective of the plebiscitarian presidents and their supporters, the continual acclamation of presidential performance has logical and political priority over any other form of accountability. “The electorate is the ultimate political tribunal, and its ongoing support makes the judgements of other branches of government irrelevant,” says Mazzuca. According to his perspective, with seven plebiscitarian ratifications and almost complete presidential control over the economy, Chavez regime in Venezuela was the closest to the polar type. Argentina under the Kirchners, who have relied on informal substitutes for plebiscites and gained control over only a portion of economic policymaking, is the moderate case in the group. Ecuador under Correa and Bolivia under Morales are intermediate cases.